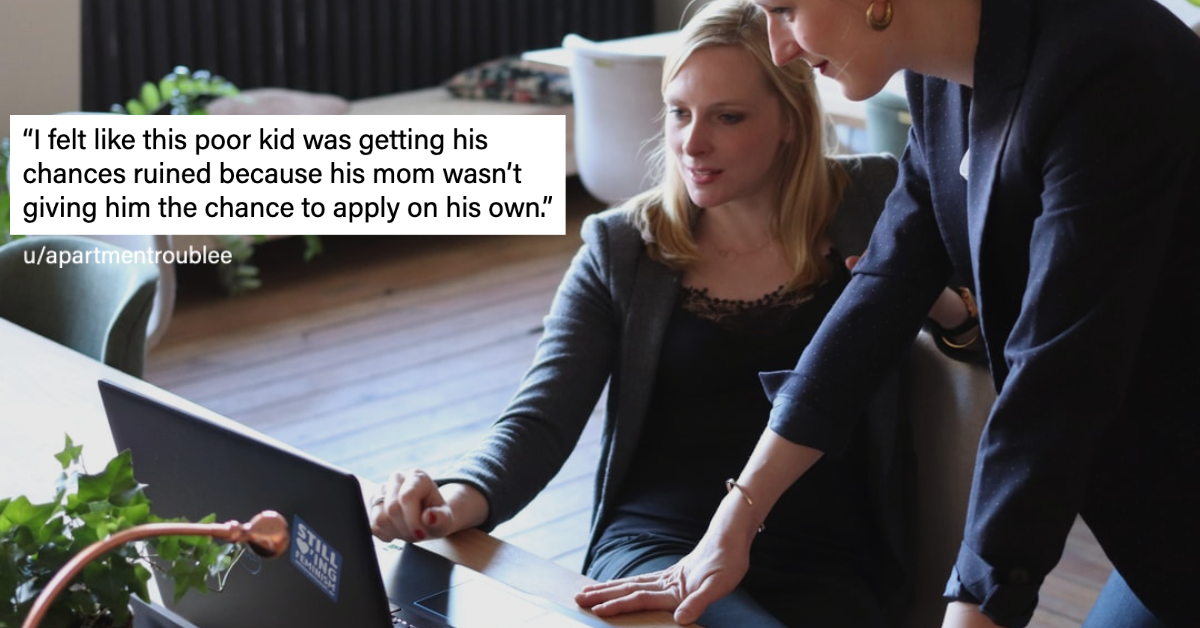 Did you grow up with an over-involved mother? Was she always trying to do things for you and intervene in your life when it was completely unnecessary? Did she ever try and take over your virtual interview?

That’s the situation with one Redditor—except he was on the other end of that interview. It’s safe to say that that applicant did not get the job, but was the OP out of line by telling him that his mother cost him the employment opportunity? Or was he simply giving helpful advice that might ensure this applicant’s success in the future?

The OP starts by saying he was a hiring manager at a tech company, and he was hiring for summer internships. A 19-year-old applied for an internship between his freshman and sophomore years of college, and they conducted a Zoom interview.

“A minute or two in, when I was introducing myself, his mom came in and introduced herself and started talking about her son’s work ethic. I thought it was a little strange. I said something polite about wanting to hear from him. She just didn’t get the hint and kept coming into camera frame during the interview and interrupting her son to answer questions for him. I asked a few technical questions which he seemed to answer well and then cut the interview fairly short.”

The OP thought the situation was done with until a month later, when he received an email from the mother asking about her son’s application.

The email bothered him, and he felt bad for the kid because his “mom used to pull the same s***” but “she only did that when I was 15 and working for a day-camp, not when I was an adult applying for engineering jobs.”

“I felt like this poor kid was getting his chances ruined because his mom wasn’t giving him the chance to apply on his own. I sent an email back saying I was not at liberty to send information about an application to anybody but the applicant. I also asked HR to send an email to the kid saying sorry but we were not making him an offer.  Anyway, after we sent that, I got a phone call from his mom, she had a forwarded copy of the email, and she was demanding answers.”

“I said that I could not comment on the guy’s performance in the interview to her as she was not the applicant. If he wanted to reach out to me I was happy to give him some feedback. However, I could say that regardless of his performance, her presence in the interview took him out of consideration for the position. We were looking for an independent and self-driven person for the position, and for that reason, it is important to see an applicant speak for themselves, follow-up themselves, etc. I also said that, as a piece of advice, every hiring manager I’ve met in my career who sees someone other than the applicant answering questions during an interview, following up on the applicant’s behalf…would also put their resume in the ‘do not hire’ pile. Since, while the applicant may be skilled and motivated, they need the ability to demonstrate those traits themselves.”

The mom “blew up” at the OP over that and cursed him to the point where he hung up. Now he wants to know if he was an a**hole for how he handled the situation.

What did Redditors think?

“It’s probably better for the kid you told her directly, seeing as she clearly does not respect him enough to believe him if he disclosed she cost him the job. She snapped at you because you gave her feedback that painted her in a poor light and she thought she did her son a wonderful favour. You’re probably the first person in a while to stand up to her,” said Cat_got_ya_tongue.

“You’re right, she needed someone to burst her freakin bubble. Tho I kind of feel bad for that guy, bc he probably doesn’t want his mother to baby him like that, but he’s in a pickle bc he seemingly still lives with her. NTA, but take that with a grain of salt, as in the end that dude was treated unfairly for things out of his control, maybe he should’ve been given some sort of chance (I mean, even his interview was cut short, so he had no way to make up for that),” suggested SenpaiRanjid.

“OP, let the kid know the reason as well. I highly doubt the Mom will pass those information across to him. He deserves to know the information about how this is handled (automatically put in the ‘no’ pile). It may make him more likely to get out of the house and sit in a parking lot just to be able to do an interview without his Mom being able to be present,” advised kitsl010.

“I agree that it was rough for this kid to lose his opportunity based on his mom’s behavior, but better for it to happen now while he’s 19 and still in college then to have happened when he was trying to get jobs after graduation. Hopefully it will lead to him having more independence in college too and make him more successful in the long run,” said Thejungleboy.

“She needs to be told. Maybe her son has told her or not but someone outside her bubble needs to be told. I say this as someone who was in her son’s shoes. My dad would do the same stupid stuff. He would call about interviews and job applications. He used to call out of work for me (if I sneezed on the phone or if he wanted to punish me or anything really, he’d call and say I wasn’t coming in) and do other stuff that would intentionally or not sabotage my work. I used to sneak around when applying for job interviews and internships just so he wouldn’t mess it up. I long ago developed a policy of excluding both my parents from job stuff. My dad because he’d still do it no matter what and my mom because she will tell him anything I tell her. I’m in my 30s and they still can’t know anything about my jobs. Thank you for telling the mom and please consider also telling the son,” said scarfknitter.

Looks like everyone thinks the OP did the right thing and should also tell the applicant as well. Hopefully, with this knowledge, the applicant will do well on his next interview.