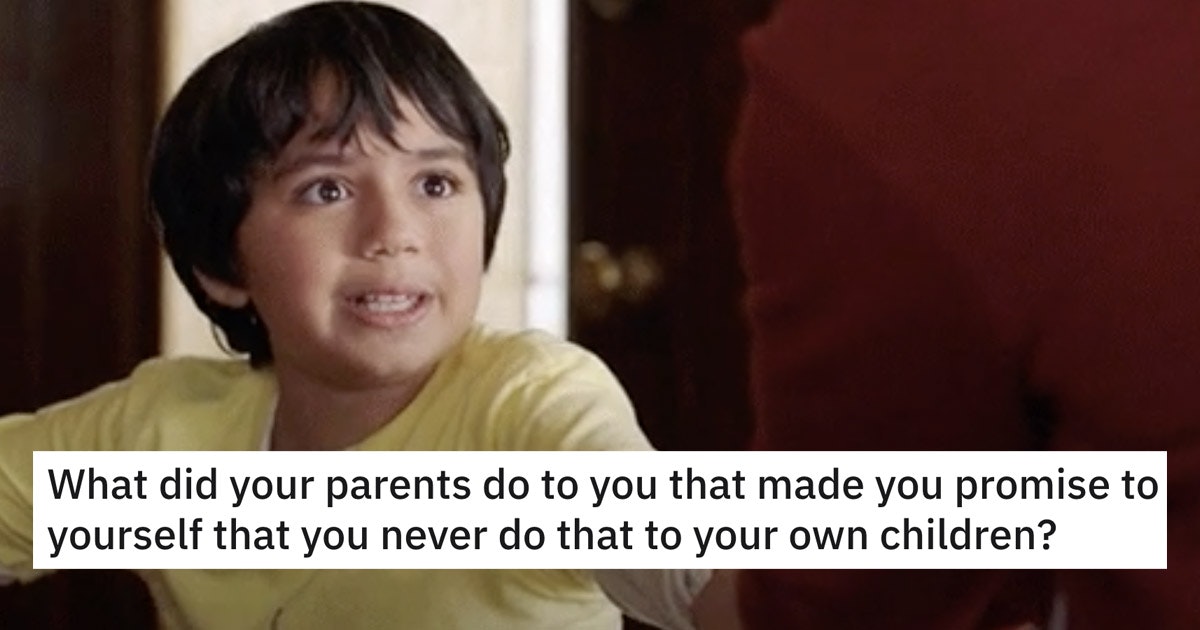 Parents aren’t always perfect people. In fact, a lot of them are not even remotely good people. We all remember the times when our parents did things that we hated to do but later realized they did it for a reason. Having to go to bed on time, making sure all of our homework was done before video games, not digging knuckle deep into your nose in public. Sure, we get it now, these things helped us become “functional adults”. But there are things our parents did that didn’t end up making sense as we age, instead, it made you think “I’m never doing that to my own kid.”

“What did your parents do to you that made you promise to yourself that you never do that to your children?”

Here are the top answers from some kids of Reddit who are all grown up now.

1. Blowing off their interests

“My parents never thought anything I did was a big deal. I LOVED art class but I remember showing my mom artwork and she’d tell me she could make that herself, ok thanks.” –No-thanks-I-am-Dead

“They always had me late or last minute to everything. I’ll never do that to my kids because, having it done to me, I know it’s all the parents fault.” –ShovelheadEd2003

“I was never allowed to hang out with friends outside of school. I had to go straight home and couldn’t stay and hang out or go over to friends houses after school or on weekends. This went well into my senior year of high school. It sucked constantly feeling like I was missing out growing up.” –missbandicoot

“They made their problems into problems for the whole family. They pulled us into everything. That’s not fair to a kid. Fuck, I was straight out asked to fix things between them sometimes. No kid should be even the remotest bit responsible for their parent’s relationship or fixing things that are wrong between them. That’s fucked up. We all have problems. We’re human. No one expects perfection. But if you have a problem with your wife / husband? Don’t bring the kid into it. Don’t make it the kids problem. Don’t make the pain of the household — which they’re going to feel anyway — somehow the kid’s fault.” –Allisade

“Manufacture and manipulate situations meant only to allow me to brag about what a great mom I am. Dramatically claim credit for all my child’s achievements. Publicly and privately belittle and mock my child so that I may feel superior.” –remberzz

“Isolate them from the world. Growing up I see now that they wanted to protect me from how sh-tty things were, but now I feel like a f-cking useless idiot. If I would’ve known as a kid that I had violent gang related family, addicts or that we were on welfare I could’ve found a desire to do better.” –affecting_society

“Prioritize grades over social adjustment.. They were great parents in most respects but now I’m academically successful but lonely and antisocial. My kids will not have to choose between having friends and getting perfect grades.” –4rtyHaz3

“My parents refused to address issues between my sister and myself. They hate conflict, so it was easier for them to guilt me into doing whatever my sister wanted and then praise me for being “good” than to ever put her in line. Being praised for always giving up what you want can really mess you up.” –44morejumperspls

10. Don’t be too controlling

“My parents are awesome people. Truly. The one thing I would absolutely do different if I ever got my own is to allow them to fail more. Don’t take over control whenever they aren’t brilliant at something. Let them learn.” –UpvoteForGlory

“Made fun of my interests. If they didn’t like it, it was stupid. Not only did it cause a lot of resentment and pain for me, but it meant I hid a significant amount of my life from them.” –SalemScout

“Ground them for an undetermined amount of time. I’ll decide, pass sentence, and be done, not just leave them grounded for months and f-cking FORGET they have all the electronics in a gun safe somewhere.” –LibraryOwly

13. Use kids for support

“Assumed I would financially support them after graduating from college, when they didn’t help me at all with my academics, tuition, emotional support, etc.” –AppleRose007

“Responding to most requests with “You’re not old enough to be trusted”. –ALonelyUK