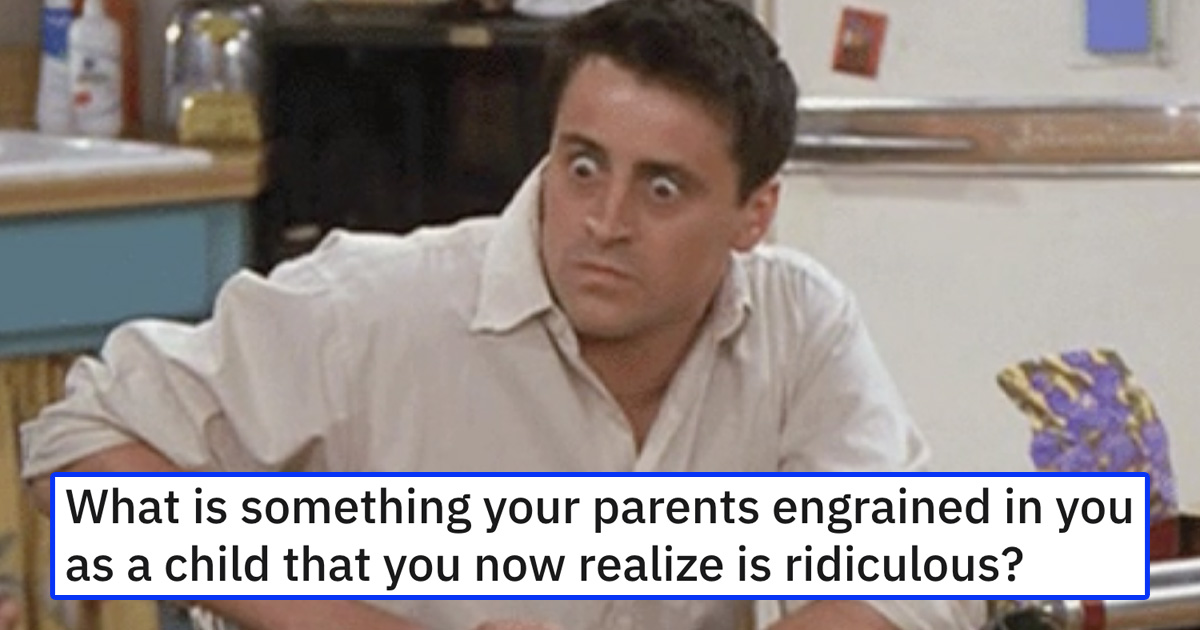 Raising a child is no joke and our parents have shaped all of us into who we are today. Of course… some parenting can be better than others and sometimes our folks engrain really absurd things in us.

“What is something your parents ingrained in you as a child that you now realize is ridiculous?”

The answers were fantastic and range from the silly and harmless to the — oh no, what happened?!

Check out our list below and let me know your favorites!

That I was allergic to sand (5 years old).

She just didn’t want to clean the sand off of me and my clothes.

This is so dumb but just happened last week. I got out of the shower & grabbed a towel & started to dry my hair with it while I stood there cold & dripping wet. I had a flashback to when I was like 10 or something & asked my mom if I could use 2 towels, one to dry/wrap around my hair & the other to dry my body – like all the ladies do on TV. She said no, of course because ” something something wasting towels because I said so blah blah blah” . I suddenly realized I’m an adult & this is my bathroom & my towels & I make my own rules. So for the 1st time in my 55 year old life I used TWO towels & it was was wonderful!

That cracking your knuckles will cause arthritis. Not true at all. I found this out on Reddit last week after 30+ years of thinking it was true.

“Sex” was a taboo word in our parents’ house.

We could not ask questions or comment on sex in any way or at any time, no matter what. It was as if sex didn’t exist – a subject alien to daily living.

Bread crust has all the nutrients.

Hair grows back faster/thicker after you shave it for the first time.

That as a girl, I should never be the one to reach out to the guy first, he must be the one to make the effort first. (Ex: if I want to hangout with a boy I like or even simply text him, I need to wait for him to text me or reach out to me first) it really messed up how I talk to guys I’m attracted too, because I’m 23 years old so I can do what I want when it comes to guys but I sometimes still have this mindset.

You have to wait 30 minutes after eating before you go back in the pool, otherwise you’ll get cramps and drown.

If you hate your job you just have to suck it up and make the best of it. Don’t complain because you’ll be pegged as a troublemaker, and if you quit you’ll be seen as flaky and nobody else will hire you.

You catch colds simply by being exposed to cold. For some reason I just never questioned the idea that temperature itself caused viruses, but it’s such a ridiculous notion once you think about it.

My mom use to tell me ALL moms would get shitfaced and act like complete assholes and should be forgiven because they were drunk and mothering was hard enough.

That growing facial hairs make you a thief, drug addicted and a failure to society. Still wonder how does that even make sense to this day.

If someone is older than you, you must respect and listen to them no matter what, even if they are rude.

Indian food is disgusting. Just had it yesterday for the first time at the age of 27. Maybe the best meal I have ever had.

That you are lazy if you watch TV during the day

You must wash your hair every day or you are nasty. Also, cheap drugstore shampoo is the only acceptable shampoo, and it’s fine. Took me until I was 40 to figure out why my hair was so damaged I had to have it short my whole life.

You are supposed to accept abuse from anyone in a superior position to yours : parent, manager … If you don’t then you are a troublemaker and a shame to the family because you rebel. You will never get anywhere in life and end up alone. Be submissive. You are a woman, that’s enough of a sin already.