11. Found This Gem And Couldn’t Believe My Eyes. Paid $10 For It, Thought It Was Just His Hammer Till I Saw Those Clasps 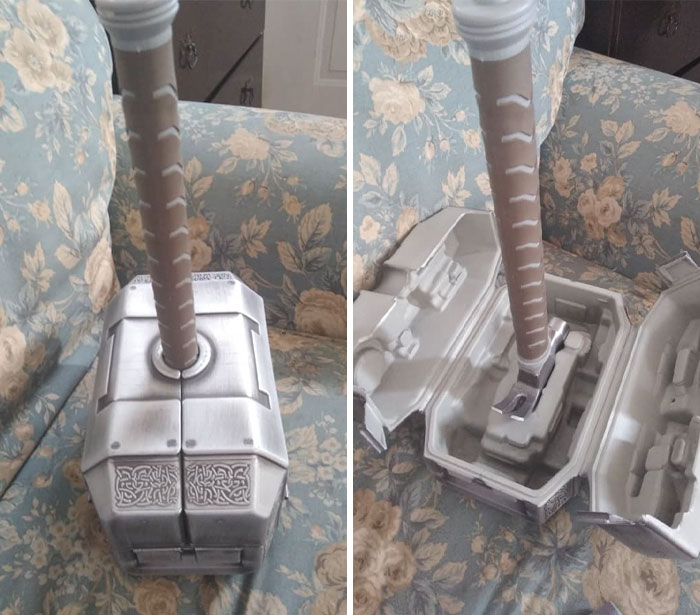 12. This Came Home With Me. It’s Brilliant And Well Crafted 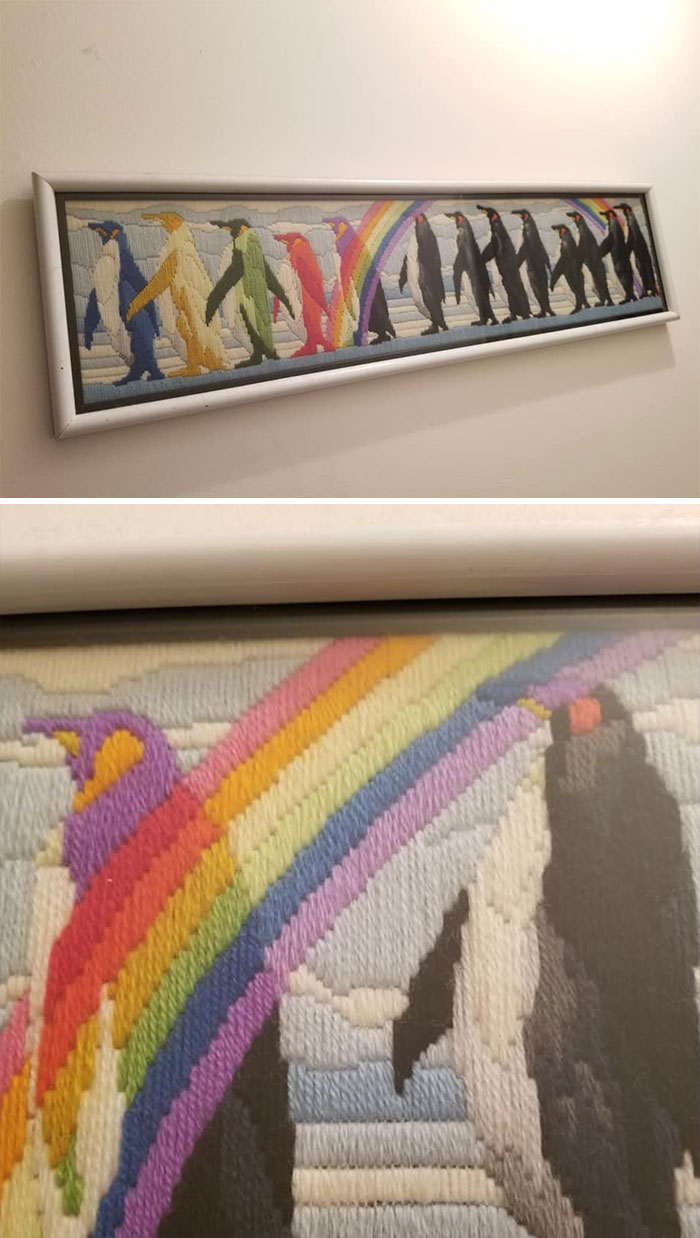 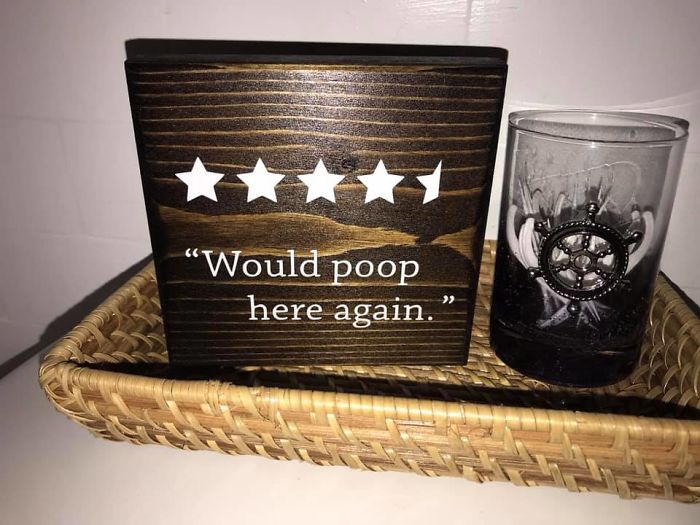 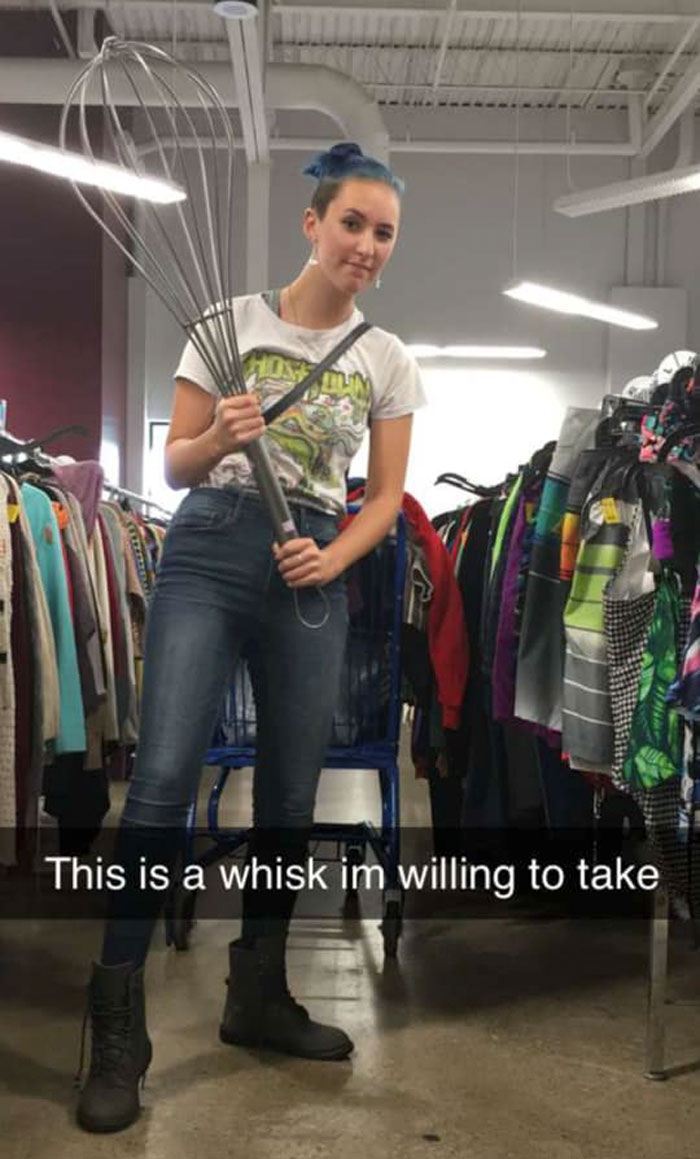 16. So This Is A Nifty Little Something I Got At A Thrift Store In South Carolina Several Years Ago For $4.25. It Is A Little Over 11 Inches Tall, Is Made Of Gold And Silver, And Weighs Approximately 1.25 Pounds 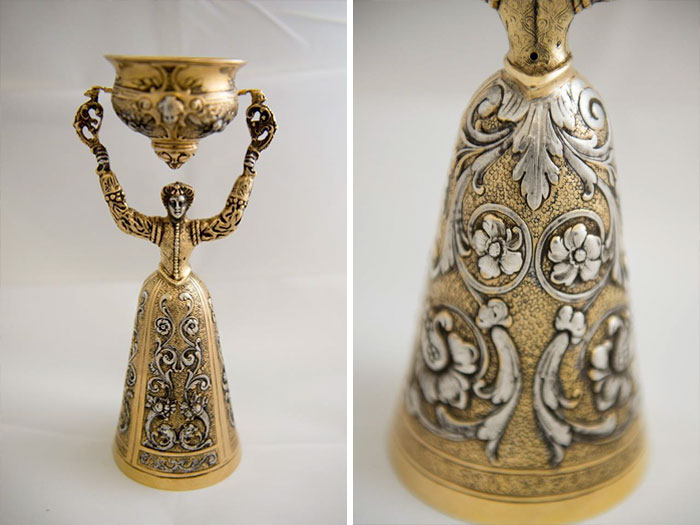 17. Meet “Bubo”! A 1960’s Am Radio From Japan. I Found Him Looking A Little Worse For The Wear And Tagged “As Is” At A Local Antique Mall In Cashmere, Washington 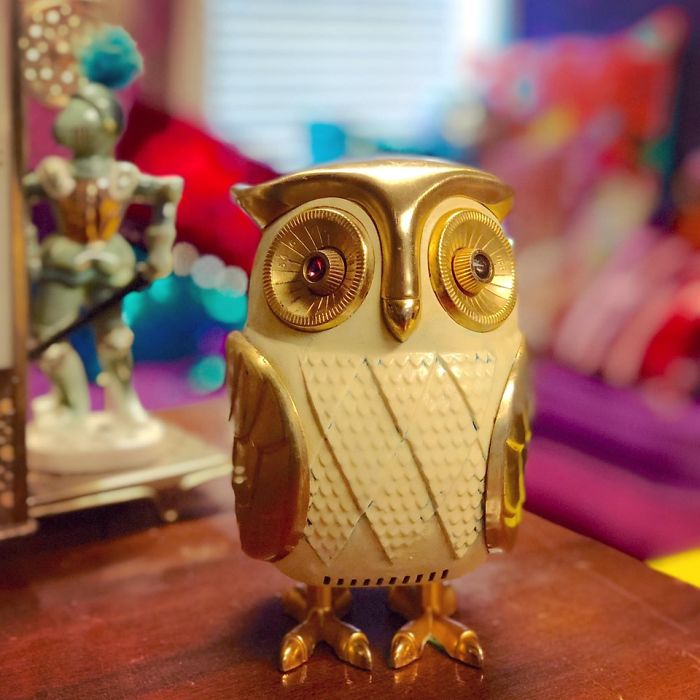 “When I found it, it was covered with what seemed like cigar smoke residue, and it looked like it was made of brass. It is called a “bridal cup” or in german, a “jugendfraubecher”. They are popularly used in japan england, and throughout europe and germany where they originated in 1450 a.d. in nuremberg.
The bride and groom can toast their marriage with it and drink from the same cup at the same time without spilling a drop as the legend of the original prescribes. The legend says that the cup was made by an illiterate gold and silversmith who had won the maiden Brunnehilde’s heart. Her father said he could only have her hand if he could make a cup that both of them could drink from at the same time without spilling a drop. The figurine’s skirt is a cup, and she holds a cup on a swivel over her head. The king was won over and his daughter married the commoner and they all lived happily ever after.
As it turns out, when I looked more closely at this piece, I realized it was not a production piece with industrial markings, but rather was a one of a kind hand-made piece using incredibly primitive methods. Turns out this piece may actually be the original nuremberg jugendfraubecher of 1450 a.d.
The German foreign ministry checked logs of lost and stolen artifacts from the war and we did not find an owner looking for it. Then they had two experts examine photos to see if it was possibly the original and a cultural treasure.
The experts agreed that there was no picture or detailed knowledge of the original to ever be sure, but that this one fit the description in every way except that it did not have pomegranates decorating it. Turns out the pomegranates run down both sides of it and they had examined picture from the front and back.
I will be taking it to nuremberg germany where I am confident the local chamber of commerce will assist with finding it’s proper place in culture. I am sure it is insanely valuable, but it is not something a person can really own. If it turns out to be a worthy example and possibly the original, it belongs in nuremberg Germany for the world to enjoy. Their local museum has a silver jugendfraubecher from around 1600 when they started to become popularized. 1600 is also when the rest of the industry developed the technology to reliably copy the original.
This bridal cup was made by fusing curved plates with molten gold and silver, and then the excess was shaved away and polished. The thickness of the sides of the skirt cup varies a great deal, and it looks like parts of the engraving on some of the plates got too hot and softened during the assembly. Up close you can see the handwork and surface engraving around the silver inlays. The figurine in the middle was cast as a single piece and the face and hands of silver were fused onto it.
I suspect that the figurine is either gold, or was cast in silver and then hot dipped in gold. A scratch on the back does not show any silver, but perhaps gold dipping or some other crude plating method might have put it on thick.
The latticework in the hands that holds the cup aloft are obviously solid cast gold, because you can see where somebody cut away some pieces, possibly desperate to raise money to flee germany before the war. I still have a gut feeling this piece left Germany in the 1930’s or early 1940’s.
The sides of the cup are a mystery too, because it would only make sense to use silver plates and fuse them with molten gold because gold has a lower melting point. After that the assembled cup could have been gilded or plated crudely. The thing is that the boundaries between the silver and gold parts on the outside of the cup look like they bleed into each other in places, and at others it looks like a sloppy gilding or plating around the silver accents. One fellow who examined it said he thinks the silver was laid into the accents of the curved plates when they were cast in gold, and then the maker cleaned up the worst areas that had bled into the gold by plating over them.
Ultimately the gold and silver content do not mean much because it is the crafting of the piece that is miraculous whether mostly silver or mostly gold. If it is from 1450 a.d., then I am told that the gold used is possibly king solomons gold brought back from the crusades.
If we can date it with metallurgy or some other technology, that would be our best likelihood of authenticating it as the likely original. It is entirely possible this is an amazing homage to the original from a more recent time, but was apparently never used as a fake, because we would have heard about that in the news of the day, and it would be an insane ammount of money to spend making it and no cashing in.
As for an estimated value, it might just be an amazing old jugendfraubecher of unknown origin worth several to a hundred thousand bucks or so depending on the age and other factors. If it is found to be the likely original, then it has no price because it was never mine but to be a custodian. If it turns out to be something to sell, I am giving half to the thrift store where I got it, and the other half goes to my favorite charity. That is, after they have reimbursed me for the $4.25 I paid for it.
At the very least I have been enjoying a great adventure in finding out what it is.”

18. Wilhelmina Slater (Aka Willie) Loves Her Chair. I Think She Needs A Couch

19. Found This Guy On The Side Of The Road. The Elderly Man Getting Rid Of Him Told Me It’s Because His Wife Can’t Stand Looking At It Anymore And It’s Crack In It’s Back 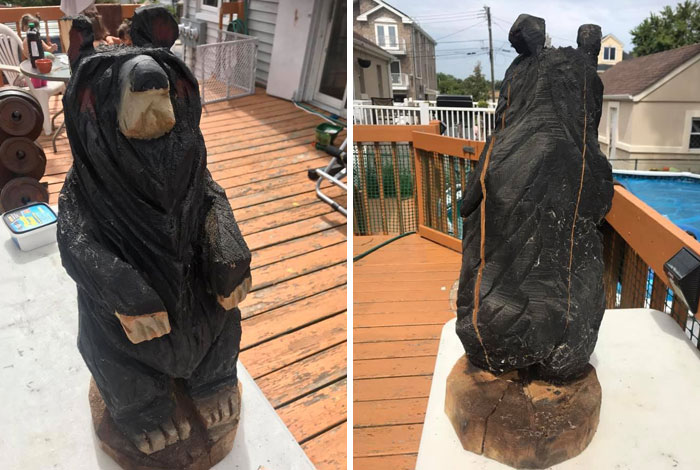 He was pretty upset over it and mentioned he had this guy for over 35+ years. Currently working on restoring him! Yesterday was dedicated to cleaning, gluing and filling. Today once the filler is done and it stops raining, I’ll be sanding and sealing. Thinking about gifting this guy back to the elderly man.

20. One Of My Favorite Finds! Found In An Antique Store In Florida. Unopened Bottle Of Poison. You Can’t Tell Here But The Pills Are All Coffin Shaped… The Store Had An Opened Bottle As Well 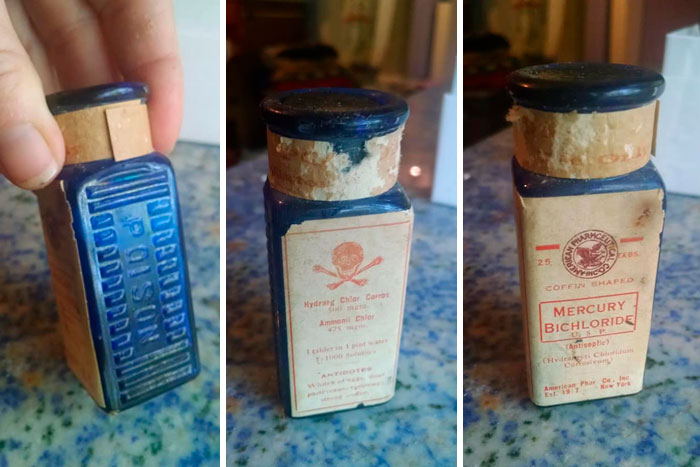