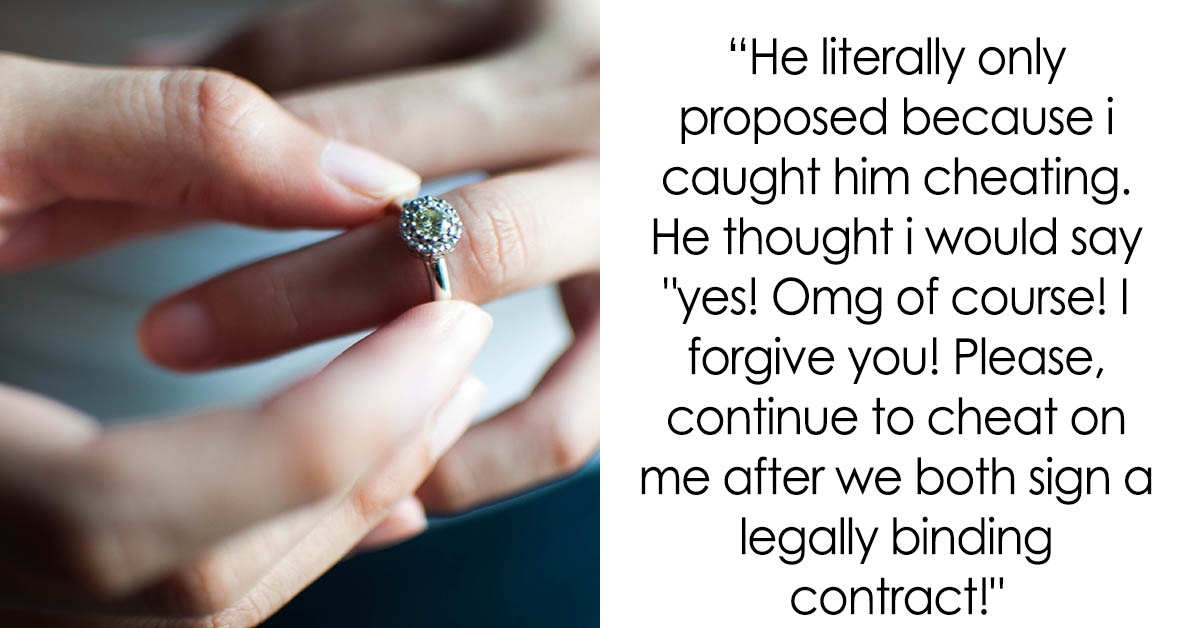 Recently, u/zp1995 asked Reddit users who have turned down a marriage proposal why they did and…all I can say is ouch.

I met him at an art opening, he flew back to his home state a couple days later. We spent a month talking on the phone every day, and he asked me to come with him to Italy while he produced some paintings for a patrons new villa. I started getting everything together to renew my passport and prepare for the trip. He told me he was going to propose to me in Italy. I told him this was too much for me and I wasn’t feeling like we were on the same level in the relationship. He lost his shit, called me 50 times through the night, but after the first time I didn’t answer anymore. A few years later I found out he had gone to prison- statutory rape of one of his art students. –LizaBerlin

Because we had been dating for a week. –sassylittlespoon

He told me he wouldn’t say that he loved me until we were married. Big red commitment flag. –beautifullybroken10

I was only 16 he just turned 20. Also he gave me his ex girlfriends ring. Ya no. –kimkatistrash

I was in my first few years of teaching and one of my nine year old students brought his sister’s play ring to school, got down on one knee when the class was on the field, and he proposed to me. It was very sweet. I declined saying that he was a little young for me. –MrsKilltime

I thought my ex had anger management issues, and I didn’t get along with his mother. He was too attached to her. He later became a violent alcoholic—years after we broke up. He also stole quite a bit of money from me to give to his mother for bills… I was not aware of this until months after the fact. I feel like I dodged a huge bullet there. –pelicanfriends

We were on the verge of a breakup when he asked. We’d been having problems for a few years. His idiot friend told him it was a good idea to propose and that it would make everything magically better. I told him no,we broke up and I moved away for a while.

As they say, absence makes the heart grow fonder..it was true in our case. We were able to work things out. I moved back and 2 years later, we got married. We’ve been together for 24 years, have 2 daughters and 1 grandchild! –OtterNonsence417

My mom had been dating a guy for a few weeks after his wife had just died from cancer his daughter was at college and he was paying for her education/boarding/food. I had just turned 18 and started paying my mom rent money , he proposed but said that I needed to move out because he didnt like me and thought that I was a free loader. my mom told him that she loved me more than him and that he could shove his dead wife’s ring up his ass and left him. – CokeZeronoize

He literally only proposed because i caught him cheating. He thought i would say “yes! Omg of course! I forgive you! Please, continue to cheat on me after we both sign a legally binding contract!” Dude was dumb. –floordit

When he asked, my future flashed in front of me and I hated it. He was a good guy and I did love him, but we wanted different things. We had been together for many years but the proposal was still a surprise. I think he proposed to try and save a sinking relationship. –futalfufu

Well, he proposed as I was breaking up with him, which was awkward and for some reason he thought it would make me change my mind. Also he had threatened to kill my family the day before (hence the breakup) so there’s that. –MermaiderMissy

Got asked in college by a close female friend. We weren’t dating, I hadn’t ever felt an attraction to her, and I knew she just wanted a husband more than she wanted me, the actual person. 100% yikes. –YouHaveToGoHome

It was our first date. He showed up drunk and called me somebody else’s name. –Missscarlet9314

A friend’s girlfriend got hammered at a bowling alley. Got down on one knee completely seriously and then wet herself while proposing to me. –buserr0r

My mother was engaged to a man while she was in college. The wedding plans were well underway and as the wedding got closer, her fiancé started acting super clingy and possessive. She called it off a few months before getting married. He has lived locally their whole lives so she’srun into him a few times. Apparently he’s the super jealous type who doesn’t let his wives have male friends and he has been married three times. My mom definitely dodged a bullet. –NapkinStack66