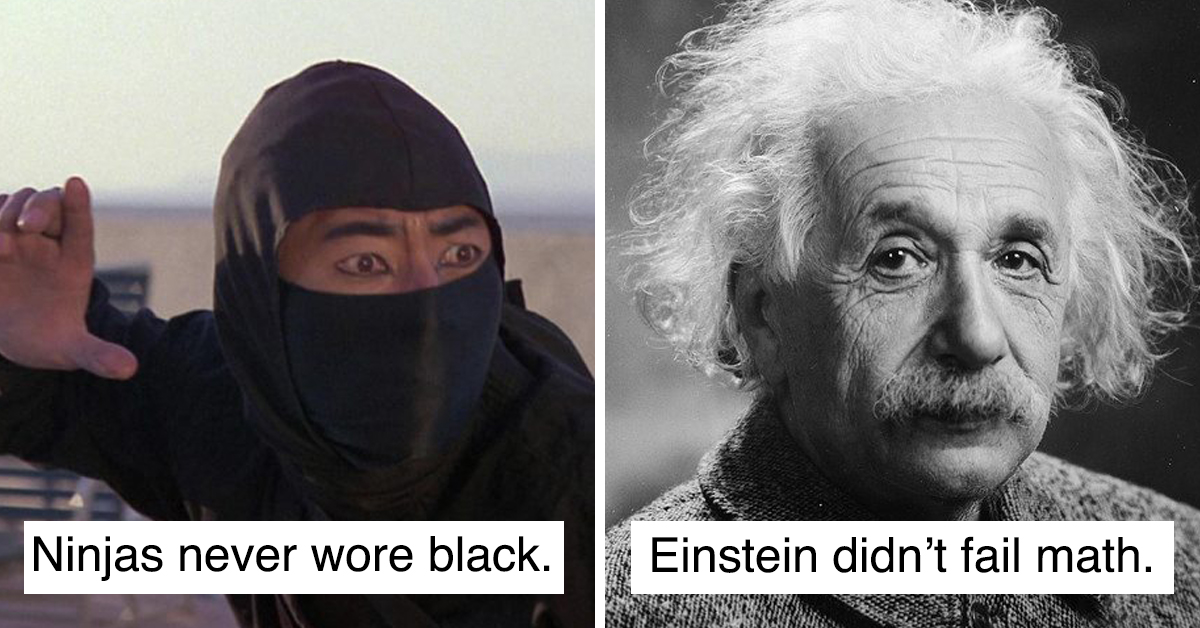 The folks over at Bored Panda have collected a whole bunch of facts that really aren’t, in fact, facts! They’re total lies or myths that have just grown and grown… It’s a pretty good list, so we wanted to share it with you too! Enjoy.

…and can fly without violating any law of aviation. It’s not a mystery whatsoever!

It’s a nice idea, but in reality bees do not disobey any laws of physics. If they did, bees would be responsible for ripping apart time and space whenever they flew around.

Nope, NASA didn’t spend millions to create a pen to use in space. In fact, NASA’s mechanical pencils cost $128.89 each and taxpayers were mad about THAT — there’s no way they spent money on a fancy-ass pen.

Instead, the Fisher Pen Company created the pen, but the money did not come from NASA.

Darwin said we come from monkeys. Nope. He never said that. This common misconception belies a profound misunderstanding of evolution. This is not unlike the popular illustrations of mankind as the pinnacle of the tree of life. Saying we come from monkeys is like saying you are the child of your cousin. Darwin said that monkeys, apes and humans must have a common ancestor because of our great similarities compared to other species. Even in his day it could be shown that we are more similar to apes than apes are to monkeys.

4. Sharks can get cancer

Scientists have known for more than 150 years that sharks get cancer. And yet the belief persists that the animals don’t suffer from the disease.

That misconception is promoted in part by those who sell shark cartilage, who claim that the substance will help cure cancer, said David Shiffman, a shark researcher and doctoral student at the University of Miami. But no studies have shown that shark cartilage is an effective treatment, and the demand for the material has helped decimate shark populations, researchers say: Humans kill about 100 million sharks per year, according to a March 2013 study (although many factors contribute to the killing of sharks, including demand for shark-fin soup).

5. You’re not swallowing spiders in your sleep

Most people move while they’re asleep and that would scare spiders. Most people don’t sleep with their mouth open—and even those who do, tend not to swallow if something enters it.

Walt Disney gets all the credit for creating Mickey Mouse, but it was actually his best friend Ub Iwerks who first brought the iconic character to life in 1928.

7. Orson Welles’ War of the Worlds didn’t cause hysteria

The supposed panic was so tiny as to be practically immeasurable on the night of the broadcast. Despite repeated assertions to the contrary in the PBS and NPR programs, almost nobody was fooled by Welles’ broadcast.

It was basically a big ol’ marketing campaign.

In fact, he was probably of average height. According to pre–metric system French measures, he was a diminutive 5′2.” But the French inch (pouce) of the time was 2.7 cm, while the Imperial inch was shorter, at 2.54 cm. Three French sources—his valet Constant, General Gourgaud, and his personal physician Francesco Antommarchi—said that Napoleon’s height was just over ‘5 pieds 2 pouces’ (5’2”). Applying the French measurements of the time, that equals around 1.69 meters, or just over 5’5”. So at 5’5” he was just an inch or so below the period’s average adult male height.

9. Yellowstone isn’t overdue for an eruption

Basically, volcanoes aren’t measured the same way earthquakes are and they don’t follow a schedule or an average.

According to a survey from 2013, around 65 percent of Americans believe that we only use 10 percent of our brain.

But this is just a myth, according to an interview with neurologist Barry Gordon in Scientific American. He explained that the majority of the brain is almost always active.

The 10 percent myth was also debunked in a study publishedTrusted Source in Frontiers in Human Neuroscience.

Underachieving school kids have long taken solace in the claim that Einstein flunked math as a youth, but the records show that he was actually an exceptional, if not reluctant, student. He scored high grades during his school days in Munich, and was only frustrated by what he described as the “mechanical discipline” demanded by his teachers.

12. You can see more structures than just the Great Wall of China from space

It has become a space-based myth. The Great Wall of China, frequently billed as the only man-made object visible from space, generally isn’t, at least to the unaided eye in low Earth orbit. It certainly isn’t visible from the Moon.

You can, though, see a lot of other results of human activity.

The visible wall theory was shaken after China’s own astronaut, Yang Liwei, said he couldn’t see the historic structure.

13. Sections of the tongue for different tastes?

The ability to taste sweet, salty, sour and bitter isn’t sectioned off to different parts of the tongue. The receptors that pick up these tastes are actually distributed all over. We’ve known this for a long time.

Back in 1957, James Vicary secretly flashed words that would stimulate people’s desire to eat and drink a specific item. At the end of the movie, it’s said, the sales of both increased. But the American Association of Psychology disproved it and in 1963 Vicary admitted that he made the whole thing up.

16. Lightning strikes the same place twice all the time

Actually, lightning can, and often does, strike the same place repeatedly — especially if it’s a tall and isolated object. For example, the Empire State Building is hit about 25 times per year.

Ninjas never wore black. The darkest color they ever wore was blue (during nighttime). Mostly they wore the inconspicuous clothing of peasants, merchants, traveling priests, etc.

There’s no record of this ever happening; it was also something said about other royals.