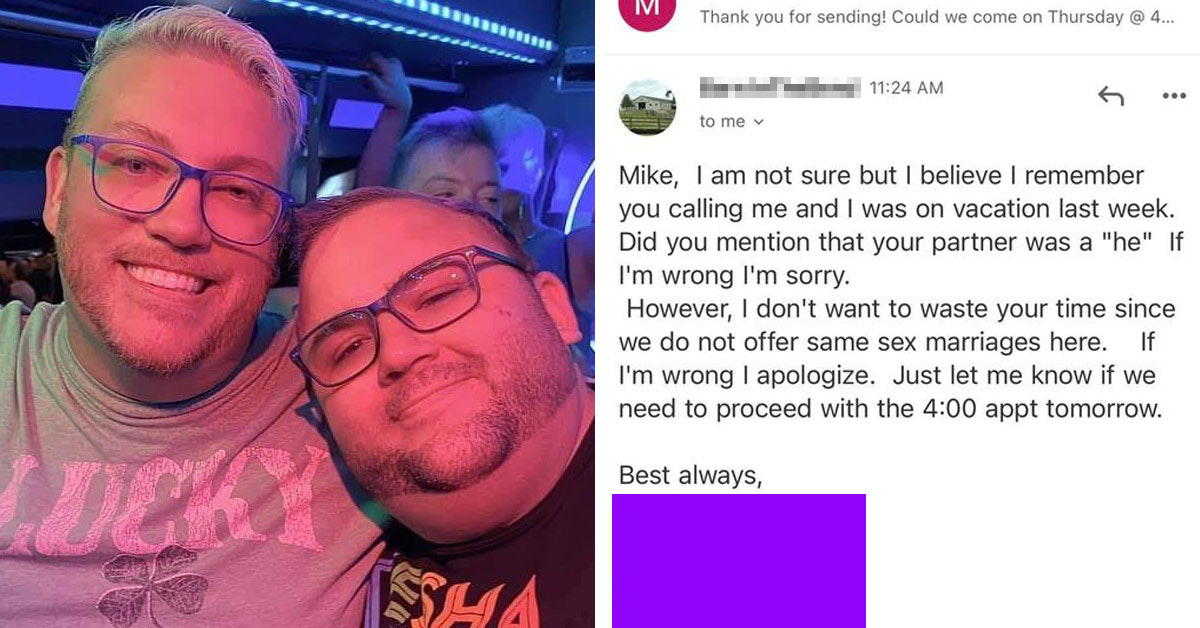 Mike Gill and Coty Heaton were engaged on July 10th and have spent months planning their wedding. As anyone who has ever planned a wedding can attest: finding the venue is tough. So when they thought they found the right one, they were thrilled. They’d settled on Barn in the Bend, a rustic place in Nashville.

“We were searching for a venue that had indoor/outdoor space for our wedding, it had to be in the Nashville area and within our budget,” Mike said to Bored Panda. “After going through tons of venues, this one hit all the marks and was on our list of places to tour.”

But the emails exchanged with Jackie Daniel, Barn in the Bend’s owner, became very odd.

Mike informed Jackie that he’d let everyone he knew know the reason they weren’t getting married at Barn in the Bend. Jackie replied that the decision was due to her religious beliefs.

“People’s reactions have been overwhelmingly positive and supportive,” Mike said. “Once things really blew up we stopped reading the comments because there are trolls on the internet you can’t avoid. But so many people we know and don’t know reached out through social media and it’s been incredible.”

The couple has found another venue. “It’s called The Grove at Williamson Family Farm. Our focus now is to start planning a really great wedding and party for our friends and family to be a part of. This was an unfortunate start to the process but it’s helped us to find so many more options we didn’t know about!”

Picking a venue is incredibly important; the location can set the tone of the wedding and the people you deal with during the course of the day can make or break the experience.

People who heard Cody and Mike’s story have jumped to their defense.

George Jackson shared, “It has been brought to my attention that the venue Rachel and I got married at back in 2018 (Barn In The Bend) has been denying service to same sex couples. This is incredibly disappointing to hear. In addition to our wedding I wrote a tune and named it after this venue which is featured on my 2019 album “Time and Place”. Rachel and my wedding was a fantastic and joyous event thanks in most part to the incredible amount of work put in by Rachel to transform the simple barn into a beautiful setting and thanks to the wonderful family and friends who surrounded us on that day, including the many LGBT friends who were there to support us, and who I now know we could not do the same for in that place.

“The venue owner Jackie Daniel was pretty awful to deal with for us honestly and as disappointing as this is to hear about, perhaps it’s not too surprising… I guess the way things are in this state and in this country the venue and it’s owner are afforded the right to deny same sex couples access to their venue, but their actions and bigotry have consequences and I am happy to be able to afford them some, I invite you to join me. I will be making a donation this month to the Trevor Project (who provide support to LGBT youth in need of help, counciling and information) in the name of Jackie Daniel and in addition to my personal donation, I’ll add 50% of any money I make selling my album Time and Place or the accompanying tune book this month to that donation. If you already have my album and want to make a donation to the Trevor Project or another charity that supports LGBT rights please do so and make it in the name of Barn In The Bend or Jackie Daniel address (519 Nawakwa Trail, Madison TN). My hope is that they’ll get some letters or emails thanking them for the donations and they’ll see that their bigotry and exclusion is directly resulting in the funding of LGBT rights organizations. My hope is that when people listen to or play my tune “Barn In The Bend” they will hear a tune that represents (and funds) inclusion and love as it was intended to, and not something that represents the sad actions of the venue owners, who I now know to be hateful. I’m happy to use my tune that bears the name of this venue as a small vehicle to combat the bigotry and hate I honestly can’t believe we still have to talk about in 2021. @barninthebend”

It also seemed that Yelp reviewers picked up on the story:

Mike wanted to be clear that he didn’t post to get likes or press, despite the story taking off. “It was just to let the people in our friend circle and the Nashville area know about this venue and their unfortunate business practices,” he added. “It’s frustrating that just because we are a same-sex couple we don’t have the same options as any other couple.”