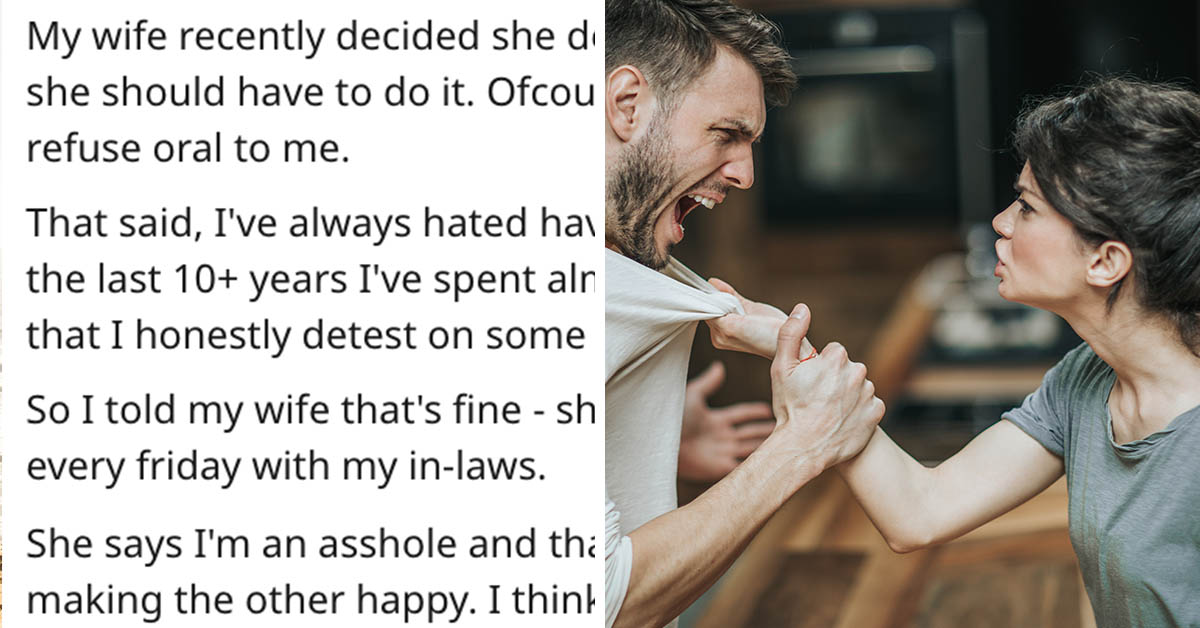 Marriages are always a give and take.

But, if one thing is certain, regardless of how much you’re giving and taking—marriage should always be about agreeing and compromising.

One husband—u/Ilikeoralthrow/—was sick and tired of his wife refusing to perform oral sex on him, so he offered her an ultimatum: if he doesn’t get head from her, then he won’t spend time with his in-laws.

My wife recently decided she doesn’t want to give oral anymore. Her reason is that she doesn’t like it and so doesn’t think she should have to do it. Ofcourse she’s right, no one can force her to give oral, and she’s entirely within her right to refuse oral to me.

That said, I’ve always hated having Friday night dinners with my in-laws. My in-laws are nasty judgemental people and for the last 10+ years I’ve spent almost every Friday night – when I should be relaxing from a long week’s work – with people that I honestlydetest on some level. Why do I do this? Because it makes my wife happy and I want her to be happy.

So I told my wife that’s fine – she doesn’t have to, but that I’d also like to stop doing something which I hate – spending every friday with my in-laws.

She says I’m an asshole and that the situations are different. I disagree, we’re both stopping something we hate despite it making the other happy. I think we’re both within our right to do so and neither of us are assholes.

While you may feel strongly that this guy is being a total dick, Reddit was completely divided. Some thought “yeah, this guy is a total asshole,” but, others supported his decision and said he’s totally in the right.

NTA I’m guessing he sees his in laws way more often than he ever received oral so he’s doing something he hates a lot more than she was. –jahoefs

NTA. Relationships require compromise and, while I agree it’s petty to bring it up the way you did, gotta respect eachothers wishes and sometimes be uncomfortable for the other’s sake. –Machigo5599

Others completely disagreed and said he’s a total tool.

You’re being petty with it. Had you refused going to dinners just because you don’t like them, it’s one thing. You’re just tacking something on because she’s refusing to do something. YTA. –bossyjudge

YTA. You’re clearly doing this in retribution, which makes you an asshole. And your wifeis right…the situations are entirely different. –spooky_f0x

While I think it’s rude for his wife to just up and stop giving her husband oral because she decided she “doesn’t want to,” but had comfortably done so for years—I think bringing his in-laws into the mix is a bit weird. I don’t want to mix oral and my in-laws…ever.