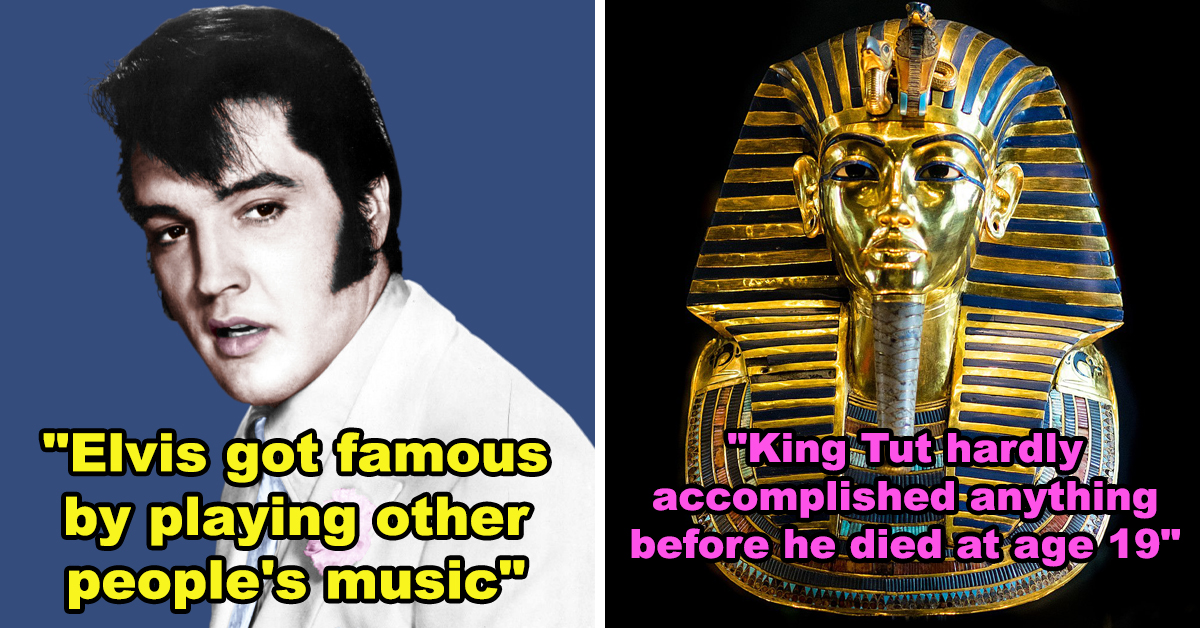 Gotta love a good question on Reddit. We stumbled on u/peppers_mom asking the community which historical figures were overrated. Here are some of the replies:

“King Tutankhamun. He is the most well-known pharaoh, but he hardly accomplished anything before he died at age 19. He’s only famous because of the amount of treasure that was found in his tomb.”

“Paul Revere. He gets almost all the credit for warning of the British invasion, even though he was one of five riders. Reverve was important to American history, but his claim to fame is overrated.”

“Steve Jobs and other famous scientists like Elon Musk. They claim they do all the heavy-lifting, but in reality, they have other capable scientists pitch and create innovative products.”

“Princess Diana. She wasn’t a bad person — in the context of the British royal family, she was special for how she connected with the public. However, it’s weird how she’s almost treated like a saint. The Diana obsession is out of proportion to the reality of who she was.”

“Thomas Edison. He didn’t really invent anything — his hired team did.”

“John F. Kennedy. Theodore Sorensen secretly wrote Profiles in Courage for him and Kennedy took the credit and the Pulitzer Prize for it. Were it not for the fact he had a tragic death, I doubt he would have been as highly regarded.”

“Gandhi. If you look into his life, he did some really weird things like sleep next to young girls to test his chastity.”

“John Wayne. He literally acts the same in every movie with his monotone voice. Plus, he always plays a cowboy or Marine.”

“Winston Churchill. He’s eulogized in the UK, but he was a casual racist. He was also responsible for sending the Black and Tans into Ireland and his policies caused the Bengal famine in India.”

“Nelson Mandela. I know people from other countries revere him, but as a South African, I feel differently. All he did was spend years in jail and become president AFTER apartheid ended. I still think he’s a great person, but he’s overrated.”

“Elvis. He got famous by playing other people’s music, and his only notable claim to fame is that he was a good-looking white guy.”

Rasputin. He’s more popular abroad than in Russia, mostly thanks to that old song and a few creepy photos.

“Christopher Columbus, how do you give credit to a guy for discovering North America, a land that people had already discovered and inhabited years prior?”

“The Beatles. I know a lot of people are obsessed with them, but in my opinion, their music isn’t that great even for its time period.”

“Martin Luther King Jr. He deserves tremendous accolades, but it seems like he gets disproportionate credit for civil rights in the US. There were many othersinvolved in the fight for civil rights who don’t get due credit.”