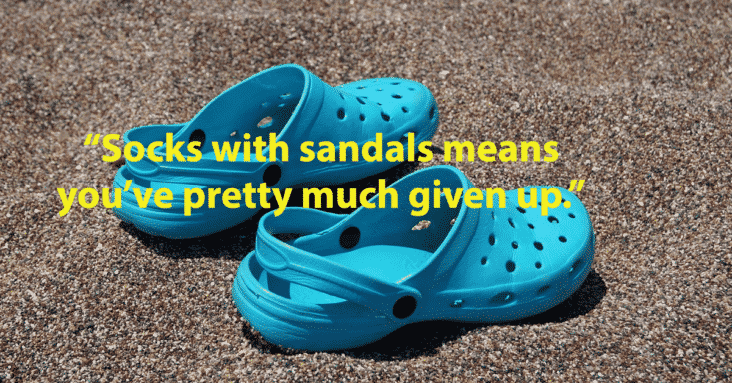 Fashion is a way of expressing yourself.

It can indicate where you go to school, what music you like, what sports you enjoy, and what cultural traditions you observe, and who you voted for (red hats will never be the same again, which does make me sad).

Some fashion can also establish you as a person with a community or indicate whether you are single or taken.

On Reddit, folks are sharing the hidden dress codes people use to identify themselves, and some of these are really fascinating.

“Pre-Trump,someone told me a red hat in my town was a sign that you were selling meth. I was like “how did I not notice this” as literally every tweaker was wearing one, some women wearing red pirate bandanas or cartoonish red logo-less ball caps.” — croutonianemperor

“I used to wonder why certain people in my office would wear the same colors as each other sometimes. Turns out they were listening to a radio station here in NYC that would suggest a color for you to wear that day.” — Offthepoint

“Anything with pineapple print on clothing while on a cruise means you are swingers.” — Rhegarty44

“So this is probably a very specific Norwegian thing, but the colour of your hat is signaling your availability when hiking in the mountains. Red hat means taken, green means available (and orange means that you’re open for a chat). This is important knowledge if you’re trying to pull a Norwegian, because hiking is the only (non alcoholic) activity where a Norwegian will ever talk to a stranger. Ever.” — DreamersVoid

“Sunflower lanyards means the wearer has a hidden disability. Some places like Heathrow train staff to recognise them and offer assistance.” — Vusys

“In China, your zodiac year is your unlucky year (so you’re unlucky year occurs once every 12 years). The way to mitigate the unlucky-ness of the said year, is to wear some form of the color red each day. Doesn’t need to be a complete red outfit, just something that has red as a part of the pattern. But wearing red everyday is a dead give away for their age (24, 36, 48, 60) in the workplace, thus explaining the phenomenon of the red underwear gift. The red underwear is a way to beat the unluckiness of your zodiac year while blending in. So some water cooler talk could go like, ‘Hey, did you notice that <insert name> has worn red 3/7 days this week? Is she 24 or 36?’ Fascinating stuff!” — dtanmango

“Ties in specific designs can signify which university you attended or private club you belong to, to such an extent that with certain tie makers in the UK, you have to prove membership before you can buy the tie.” — brkh47

“Academic scarfs are also popular in the UK but this is largely associated with privates schools such as Eton and Harrow. The colours of the scarf and symbols show which school the alumni belongs to and sometimes the levels of their achievements.” — deathstar2187