Get you some makeup that can withstand the mangling and trauma of being hit by a car.

Not that you should be expecting to get mowed over at any point, but it never hurts to be prepared. Especially when it comes to eyebrows! In fact, science has determined that eyebrows are your most important facial feature, functionally and aesthetically speaking.

Beyond filtering dust, sweat, and dirt that might get into your eyes, brows have strong social significance for “emotional expression as well as facial recognition,” according to Yahoo! Health.

And as you may already know from personal experience, a good brow is the main thing necessary to look put-together. If you can only afford one makeup product, make it a good eyebrow pencil and/or wax situation.

Make it Anastasia Beverly Hills Brow Wiz. This isn’t an ad—though I wouldn’t be averse to a free sample or two, wink wink y’all—but merely a recommendation based on this viral tweet bestowed upon us by @MiriamMayne, who pulled a review of the pencil from a woman named Chloe Bray.

The 23-year-old musician and student at Brigham Young University left this online review: “I was hit by a car while out on a run. I walked away with multiple broken bones, a broken nose, blood everywhere, annnd perfect eyebrows. If you are considering getting this product, BUY IT.”

Bray attached a photo of herself lying in the hospital as evidence. She looks a little banged up. But her brows? ON! POINT! 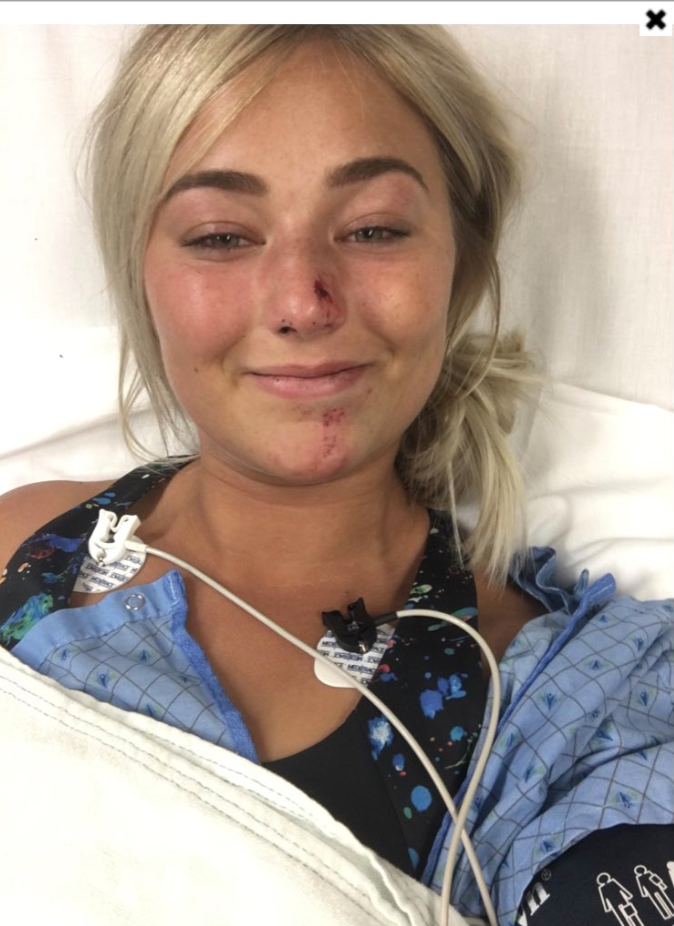 Chloe Bray isn’t the only young lady to have retained beautifully sculpted brows after having been hit by a vehicle.

Girls are out here getting out getting bulldozed left and right!

We’re all in the same boat pic.twitter.com/nVUXV7IoFY

To an alarming extent, actually.

If this story sounds somewhat familiar, that’s because a tweet posted in April by University of Florida student Lahari Manchikanti followed a similar format, though with a different product. Manchikanti, who goes by @guadalahari on Twitter, was looking for a new eyeliner when she found a review by a user who identified herself as “Bluntredhead” on the Kat Von D website and @catsandcusswrds on Twitter.

Much like Chloe Bray, Bluntredhead was hit by a car—but you wouldn’t have been able to tell just by looking at her eyeliner. “I was in a car accident and my eyeliner didn’t budge.” she titled her review.

Y’all I was really out here looking for a new eyeliner and look at this review lmfaooo
She deadass took a picture in her neck brace I am deceased 😩 pic.twitter.com/j9jHjAei06

“This product is truly amazing,” her review began. “June 28th I was pulled over in my car calling for roadside assistance when a distracted driver hit me going 55mph. I was taken via ambulance to the ER where I remained for 8 hours. My mascara was running down my face from crying and all other products had been wiped off in the transfer to the hospital. But not my tattoo eyeliner. I am posting a pick to show you, this product lasts and looks amazing through anything. Never buying any other liner again.”

Apparently people hated on Bluntredhead for her review (you monsters!) but that is neither here nor there.

Everyone’s hating on my review because I posted a picture of the makeup after the accident:
1. I took the photo for police evidence
2. But have you ever seen such a good eyeliner?!

The point is, if you are looking for makeup to last you—I mean, really, really last you—grab yourself an Anastasia Beverly Hills Brow Wiz and Kat Von D’s Tattoo Liner pencil. And always remember to look both ways before crossing the street.