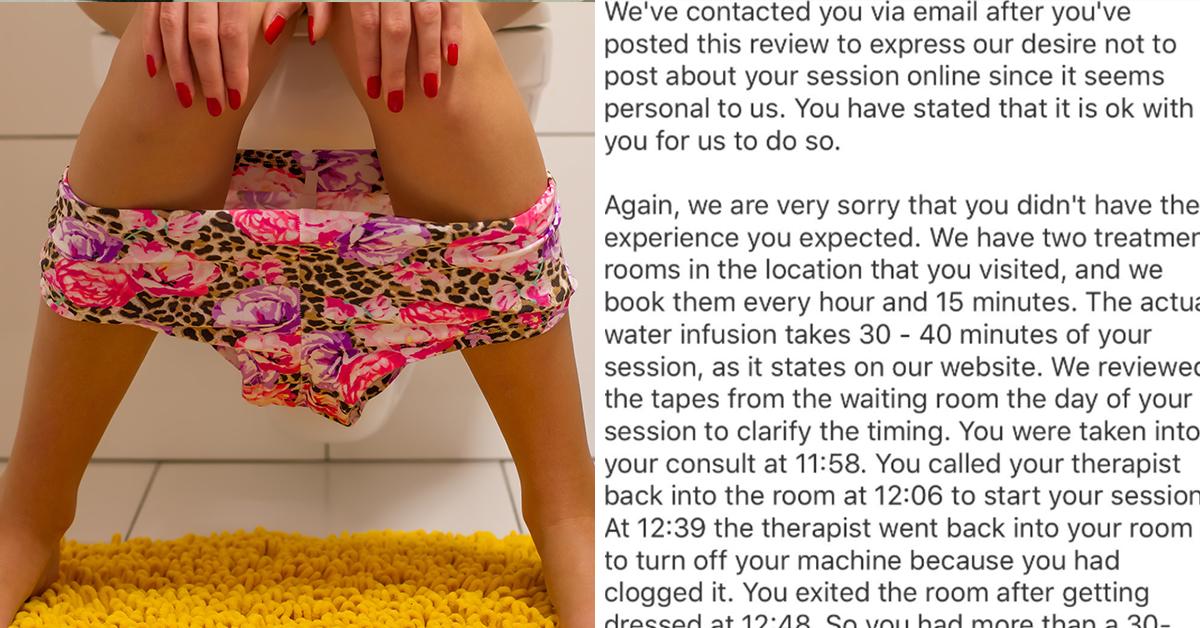 If you’re going to go for a colonic and pay for it, you want to get everything cleaned out.

I mean, not just a little bit, I mean everything.

Tyler McCall recently discovered a hilarious Yelp review from one woman who, apparently paid a lot of money and expected her entire system to be cleansed, but, her appointment was cut short due to the fact that she “clogged” the machine. McCall read the original complaint on Yelp that read:

Oh my god, I’m reading a yelp review of a colonics place and this woman was mad that her appointment was cut short because she clogged the machine, which, oh my god, NIGHTMARE, but also the owner manages to just dunk on her in the nicest but also funniest way??? It’s wild. pic.twitter.com/DIDxXGKDd0

But, after seeing the complaint, the owner of the colonics place totally owned her in the most polite and brutal way possible. McCall said it was hilarious—and, she had to share with the world because it truly is.

I can’t stop laughing. Not only was he overly honest with the woman about how long it took her to literally clog a machine, but he was passive aggressive saying “that’s amazing for you!” I’m crying—who clogs an entire colonic machine? How much does this woman poop?!?

People on Twitter could not stop laughing at how hilarious the situation was and how amazing the owner’s response is.

Hold the fuck on when they write that it’s a 3.5 inch tube are we talking WIDTH because oh my god

“which was obviously effective” omfg

Not going to be able to take a dump in 2019 without whispering “That’s *amazing* for you.” to myself.

"which was obviously effective"

That's one heck of a reBUTTal.

“That’s amazing for you” will now by my go to low key shade for 2019. Done. pic.twitter.com/QO4bVNeCBC

“This is something we feel you absolutely need” pic.twitter.com/aLCAlb7b2p

This is easily the best Yelp response to a complaint we have ever seen and, to the owner of this colonics spot—we applaud you.