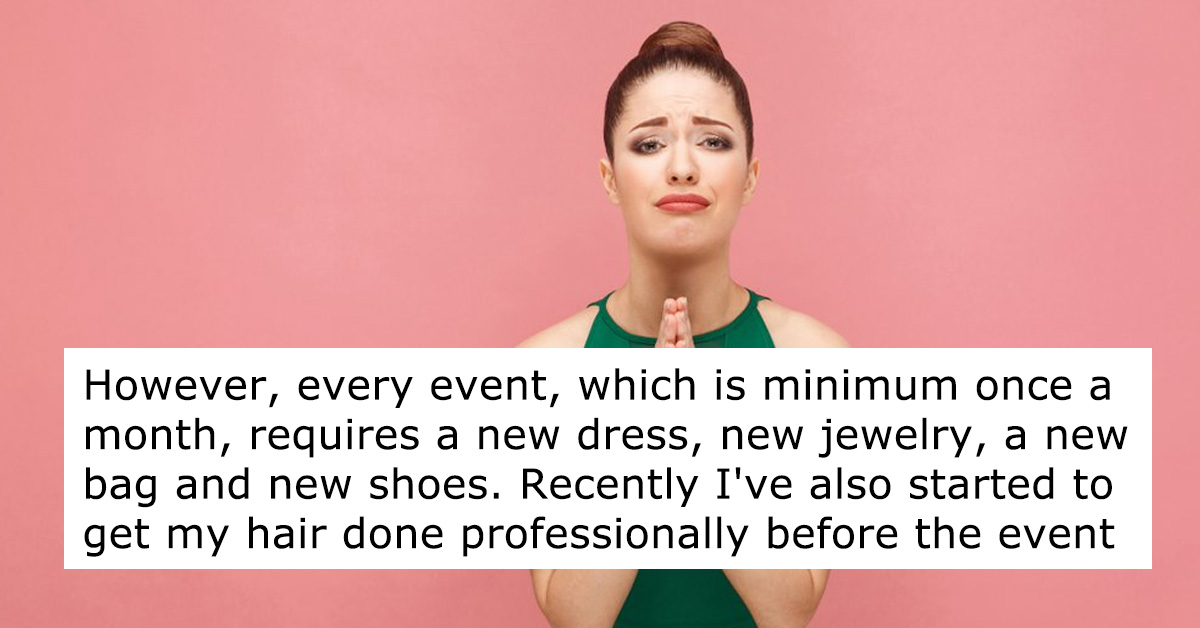 Maintaining a consistent professional look for work can get expensive. Sure, you could go the cheap route, but some industries may require more than that. Especially if you’re regularly attending fancy events.

Consider this situation one woman shared on Reddit. She’s engaged to someone who has to attend fancy events for work, which means she’s his plus one.

It’s not for her job, but in order to show up for these events, it requires her to also wear nice clothes, do her hair and makeup, and look presentable. Because the costs are quickly adding up, she asked him to pay for these things. He thought it was a bit excessive, so she asked folks of Reddit in the popular r/AITA or r/AmITheA**hole to find out if she was in the wrong.

Backstory: She has to go to1-3 of these events each month

My fiance’s work throws a lot of compulsory social events that involve a dress code. Usually 1 a month, often 2 or 3. I’m not one for dressing up but when he has these things I always go with him and dress according to the dress code. I have 3 passes a year to not go.

Also, other people will literally call her out if she’s caught repeating an outfit

At the last fundraiser one of his coworker’s wives asked me if the dress I was wearing was the same dress I wore a couple months ago to another event and I say yes. The coworker hears this and asks F if he can’t afford to buy me a new dress. F thought the coworker was a dick but later told me he was embarrassed by the “joke” and asked me to get a new dress for next time.

But the cost is adding up

Here’s the thing. F makes more than double what I make. The only reason I can afford as many dresses and shoes and accessories as I currently can is that he pays 2x what I do in everything else. He suggested this initially because he wanted a bigger place that I couldn’t afford to pay half on, and we’ve been living like this for a year now.

However, every event, which is a minimum of once a month, requires a new dress, new jewelry, a new bag, and new shoes.

Recently I’ve also started to get my hair done professionally before the event because his bosses boss’s wife and I get on well, and she asked me a few months ago to start getting ready with her, which means going to the same salon she does and getting my hair and nails done for the event while she gets hers done.

I wanted to stop doing this after the first time, but F asked me to continue because he thinks if I talk him up to the wife she’ll talk him up to the boss. There have been occasions where getting ready with her has also involved going with her to choose her dress, and she’s picked me out a dress/bag/shoes for the event and I’ve had to get them.

Just for the last event, the cost of hair, nails, dress, shoes, bag and jewelry came to over £600. There is an average of 2 events per month, so £1200 per month average to go to these events. I make about £1800 a month. Living expenses, even with him paying significantly more than I do, come to about £500.

So she confronted her fiancé…

I collected up my receipts, handed them to him and said “look, I’m fine with coming to your things, but I need you to help me out with them. You know how much I make, and all of my disposable income is going into this. If you want me in all new stuff every month, then I need you to pitch in. If the budget doesn’t stretch that far then I’m just going to have to wear my old dresses.”

He just accused her of overspending

He then started going through the receipts, asking if I really needed this or that. He then said that he already pays out a shitload each month and he’s going to need me to keep spending as normal. I said that he needs to at least partially fund the next outfit or I’m using my pass.

So she wants to know, “AITA for expecting my fiance to pay for me to get ready for his events?”

After hearing the full story, most of Reddit agrees that it’s not crazy for her to expect her fiancé to pay.

Psypokatate says it’s on him to pay:

It’s not that he needs “at least partially” to pay. He needs to pay completely for these work-related events. It takes your time, it takes your money and the only goal is so that he’s nicely seen by his boss. NTA, it’s ridiculous he doesn’t see what’s wrong with it.

AnotaCocktail agreed, adding that they should probably figure this out before getting married:

This is such an odd situation. I’m going with NTA. But I would highly suggest you and F get on the same page about how money is handled after marriage. Seems you two have incongruent thoughts. And it’s also weird that he expects you to do all this ‘getting ready with the boss’ wife’ for his benefit, and he doesn’t even want to pay for it?

Please figure this out before you get married.

Maybe look into something like Rent The Runway for your dresses? As for the jewelry, I don’t think anyone will really notice if you rotate the same few pieces of jewelry, but I’ve been to very few black tie events in my life, so I could be completely wrong. But yeah, if he seriously expects you to get a new dress for every event as well as professional hair and makeup, he should at least help out a little.

EBlackR took issue with her fiance pushing back:

If he’s pushing back on whether or not you need certain things, reiterate with him frankly that you’ve been getting catty feedback and that it’s reflecting poorly on him. It sounds like he’s shooting the messenger a bit here, frankly, you’re being an absolute champ for dealing with all of this nonsense.

The OP updated us saying her fiancé has agreed to pay for everything from now on:

We have a new agreement. He will pay for everything going forward for his work events, and the salon appointments as they are for him. If he is ever required to get clothing for my work or social events I will similarly cover the cost, but that has happened once in the 4 years we’ve been together.

I am going to keep going to these work events because we are in a relationship, one we are going to be in for the rest of our lives. I will continue to go to these events and talk him up 1-3 nights per month for as long as he works there because he needs me to do that, and he will come to my work and social events because I need him to do that.

And she also mentioned that their relationship isn’t in jepaprdy

Edit For Emphasis: please stop telling me to reconsider my engagement. I appreciate that internet strangers are worried about my relationship but I’m a big girl, I know what I’m doing. Can everyone please chill on telling me to end a loving, healthy, functional relationship that I intend to be in for the rest of my life over my fiance not realizing how expensive women’s clothing is? Kindly chill, lads.