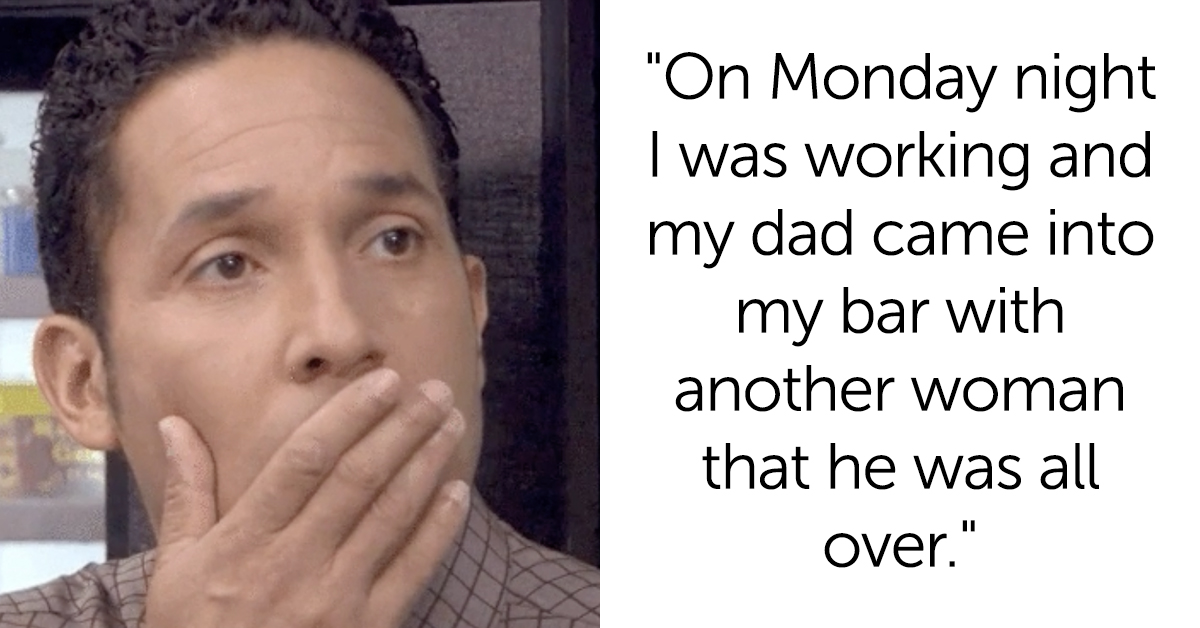 A 28-year-old Reddit user named u/aitarel7 is torn between loyalty to their father and honesty with their father’s wife, who they describe as a “really nice lady.” What would you do in this situation?

OP’s stepmom has been in their life for nine years.

Last week, OP’s dad brought what looked like a girlfriend into OP’s place of business.

On Monday night I was working and my dad came into my bar with another woman that he was all over, I have no idea if he deliberately came to my bar or if he came just because it’s a good bar, I usually don’t work Mondays and he knows that but I happened to be working.

OP asked Dad what on earth was going on; the dad said no, it wasn’t that.

At dinner, everything seemed fine and now OP is questioning what they saw.

I went to my dad’s for dinner tonight, everything seemed fine and I felt really guilty just making small talk and listening to my dad’s wife talk about their vacation coming up.

Despite their father’s assurance that there are no issues at home, the user feels guilty for not telling his wife about the situation and is seeking advice on what to do next.

I would want to know, obviously and she’s a really nice lady but my father is my father, he’s half the reason that I exist and he’s really good to me in a lot of ways. I haven’t mentioned this to my other siblings.

Gentle YTA You made it clear in comments that there’s no way this is an open relationship. And the fact your father has a full-on girlfriend and is flaunting her in public with no care in the world about who finds out about it, says so much about him as a person and how little he cares about/respects his wife and their marriage.

Yeah, lots of people will say you shouldn’t get involved. And I understand not wanting to deal with your father’s mess. But you’re still a wee bit of an asshole for keeping his secret. Personally, I’d find a way to reach out to her anonymously and let her know, because she deserves to/needs to know about this. Preferably, sooner rather than later.

Another user wrote, “Even if he were unsure about if it might be an open relationship, I still think he should tell her. People who won’t tell someone their significant other is cheating confuse me. Wouldn’t you want someone to tell you if you were in their shoes? Even if my husband and I were open (which we are not, but hypothetical here), I would appreciate if someone who cared about me cared enough to say “hey, he’s with someone else. I wanted to tell you in case you didn’t know” fuck the loyalty of it being his dad bullshit.”

A third said, “YTA. Who knows where else your dad is putting his dick or even who else is plowing his girlfriend. STDs are very real and you’re putting your step mom at risk. There’s no obligation to your father in this situation.”

“ESH minus his wife. Your dad put you in a really shitty spot by coming into your place of business with here whether or not you were supposed to be working. And you probably should tell his wife. She has the right to know, regardless if he’s your father…… That being said, maybe they have an arrangement?” wondered another.

I get that he’s your dad but that poor lady who’s been nice to you has a husband that’s going behind her back. Unless they have an open relationship, then your father is in the wrong.

You need to tell her.

People were adamant that OP tell his stepmom. What do you think?