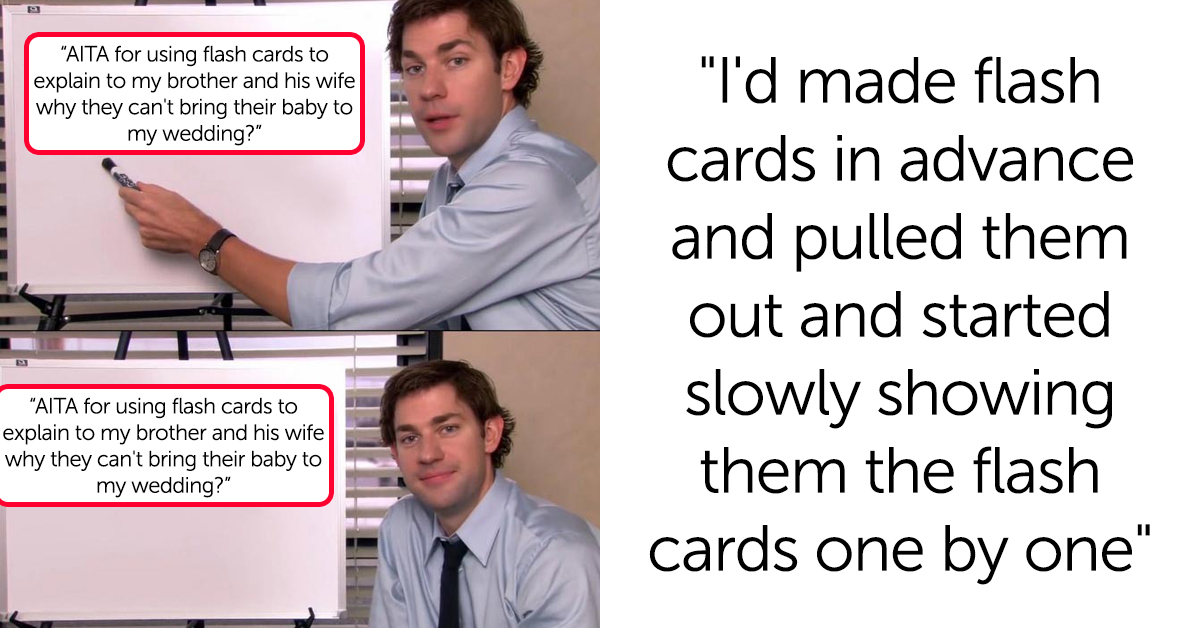 See, this gal is getting married and they decided the wedding would be free of children because?? I don’t know, they must not like kids. Unfortunately, OP’s brother is equally self-centered and, well, we have a whole mess here.

Reddit doesn’t agree with me on this dude at all, which we’ll dissect at the end.

My fiancee (F) and I (M) are getting married. We’ve decided wedding’s gonna be childfree. No hate towards children just to keep it more organized and contained.

They decided on a child-free wedding to keep the wedding “organized” (lol).

My brother ‘Chris’ (M) and his wife (F) have a 3 yro son who everyone calls “miracle” or “rainbow” baby. He came after several failed pregnancies that lasted for years.

OP’s brother has a young toddler they tried for for years. When the brother learned about the rule, he tried to get an exception because said kid is a “miracle”.

When they found out that my nephew was included in the no children rule; they tried to convince me to make an exception for him. Chris told me his son is a miracle baby and his presence at the wedding will bring “blessings” for me and my fiancee.

OP said no, but her SIL kept badgering her.

I refused and said no, the wedding is childfree. His wife kept sending my fiancee pics of my nephew when he was months old (what that mean??). I told them no, and to stop.

Her brother explained that this would cause a rift — which I kind of understand — but OP… (say it with me) said no.

My brother told me this might cause a rift in our relationship, I again said no and explained that the wedding is childfree.

This wacko brother AGAIN said his kid is different because it’s a miracle. It went on and on until OP made flash cards and ran them at her brother.

He asked again and pointed out how his baby is different since he’s a rainbow, a miracle baby. I again said no and explained that the wedding is childfree. They brought it up when they visited at my home and I knew they weren’t going to stop so I’d made flash cards in advance with the phrase “the wedding is childfree, period” and pulled them out and started slowly showing them the flash cards one by one in this order:

The wedding (with a sticker of bride and groom).

Is Child (with a sticker of a baby).

Her brother and his wife were furious. They thought this was disrespectful and rude to their child. OP’s fiancé thought it was funny, but everyone else is furious.

They both were stunned. I asked if they get it now and Chris had lost his shit. His wife had already grabbed her stuff and walked out. Chris called me an asshole for doing this and said that I disrespected him, his wife and their son who’s my one and only nephew. He rushed out after we argued. My fiancee saw the whole thing and thought that it was funny but my parents and Chris are livid beyond measure. They’re telling everyone about the amount of disrespect and mockery I had displayed towards them and I’m being told to “fix it” now.

Everyone here is a piece of shit: OP for having a no-kids wedding, her brother for being really weird about this kid, and OP again for the flashcard stunt.

Reddit does NOT agree with my verdict though. One person said, “Well, I suppose you could have used hand puppets instead, but flashcards seem to have gotten the message across. It makes me insane how some parents think their little bundle of joy should be allowed anywhere, anywhen, anytime and that no never applies to them. It’s pretty clear they were going to run this horse right up to the altar. NTA.”

“They are raising that kid to think he’s gods gift to earth. He’s gonna be so narcissistic as an adult,” wrote someone else.