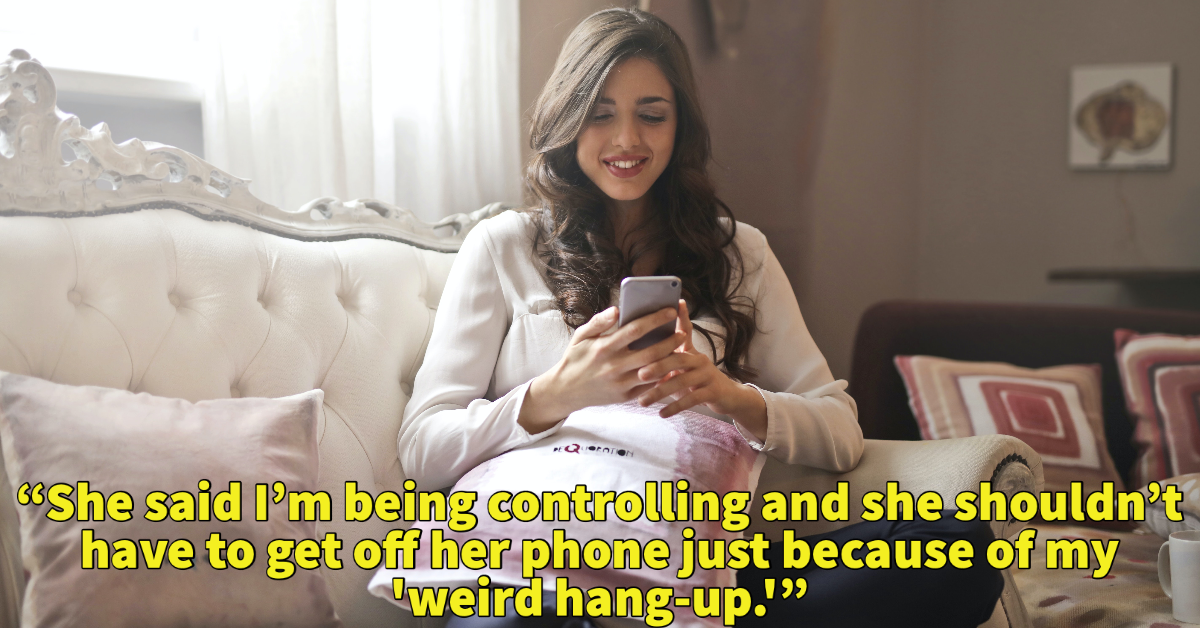 Have you ever chosen a movie based on whether or not you could play on your phone while it’s on in the background? Yeah, it happens. Some people can multitask while others can’t focus.

But one Redditor is angry that his wife prefers to play on her phone while they watch TV or listen to an audiobook together. The two of them fight about it, with the wife calling the OP “controlling” and the OP deciding he would rather not spend time with her if she is on the phone. What should this couple do about their downtime habits?

“During the evenings or weekends, my wife often suggests that we watch a movie or listen to a book together. Then when we do, she gets on her phone an plays a game the whole time. It’s some random mobile game, kind of a FarmVille/Candy Crush mix, probably data mining the shit out of her phone tbh.”

“Anyway, I find this annoying. It she wants to be on her phone, that’s fine. She can be on her phone and I’ll get on my phone and we can just be on our phones. She says she’s paying attention, and that she can listen and be on her phone. I don’t think that’s really true, sometimes it seems like she’s not always catching everything because she’ll ask for clarification on something that someone paying attention should know.”

“I’ve told her that it annoys me, and she said it’s not her problem and she is paying attention. She said I’m being controlling and she shouldn’t have to get off her phone just because of my ‘weird hang-up.’ Ever since then, any time she asked me about watching a movie or listening to a book, I’ve said that I didn’t want to because I couldn’t enjoy it while she’s just playing on her phone but that she can go ahead by herself. She’s been complaining a lot, saying I’m controlling, I’m not spending time with her, I ignore her, etc. AITA?”

What do Redditors suggest?

“YTA but soft. Some people need multiple forms of stimulation in order to focus. It could be possible the game is just a mindless task for her hands so her brain can focus on the audio book. I know I consume multiple forms of media at the same time in order to keep me focused! You have to be courteous because maybe just sitting there doing nothing while listening to a book is pure torture for her. And also it kind of sounds like you are being critical of an activity she enjoys and that doesn’t make you enjoyable to be around if you say these things to her.” —

“I am the same way. I cannot just watch TV or just listen to an audiobook, I need to play a game or craft while I’m doing it, or else I cannot focus and I get super bored and distracted. I used to get yelled at in class for doodling, but the doodling helped me remember the lesson better. If I just had to sit there and listen, I would retreat into my own head before too long, not because I wanted to, but because I just can’t only focus on one thing like that.” —

“I cannot imagine blindly staring into space listening to an audiobook. It’s something I’ve never even considering doing while sitting on the couch, and honestly have never considered anyone else doing either lol. OP, your partner is just more busy minded than you, YTA.” —

“YTA. Other people’s brains don’t function the same way yours does, and that’s okay. I play games on my phone while I listen to podcasts or audio books. It helps me focus on the content so my mind doesn’t wander off to some other place while I’m listening.” —

“Okay I’m gonna be the unpopular one and say no one is TA. I have ADHD and I need the extra stimulation when watching a movie or listening to something. It’s hard to just sit there because then I definitely won’t be paying attention even though nothing is ‘distracting me.’ I’ll miss even more of the movie or book and my husband hated that even more. I have tried to put my phone down more often though as it’s important to my husband but I’ll have something I can do with my hands which helps me to focus better. That’s potentially what is going on with your wife here.” —