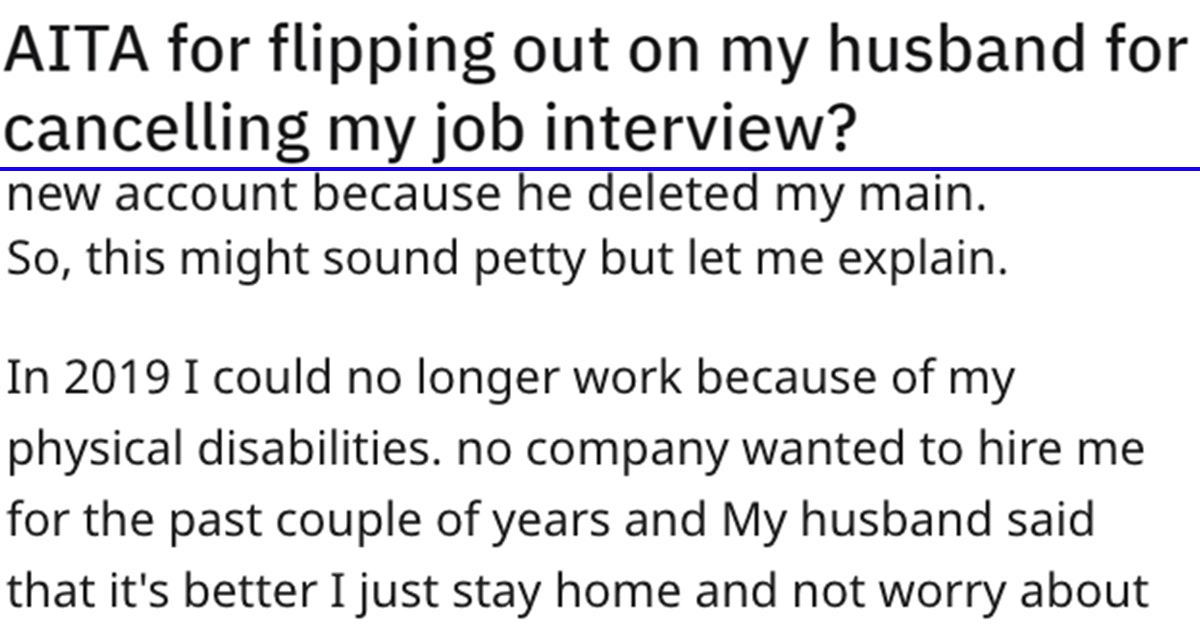 This is one of those stories on Reddit that you read and pray is fake, except we all know all too well that these sorts of situations are very real. it’s a story about domestic abuse, even though physical violence never comes into it. The story was posted by u/Mall4907677, and the very first sentence is chilling.

“New account because he deleted my main,” writes the OP, referring to her abusive husband. Yup, he’s deleting her social media accounts to keep her isolated and disconnected. And she seems to think she deserves it, which means he’s been working on her emotionally for a long time. She continues:

So, this might sound petty but let me explain.

In 2019 I could no longer work because of my physical disabilities. no company wanted to hire me for the past couple of years and My husband said that it’s better I just stay home and not worry about working. I agreed and he’s become the breadwinner, then… it’s like a switch that flipped because chores were 50/50 but after I lost my job they become 100% on me (keep in mind my physical disabilities I developed). his excuse for not doing anything to help is that I stay at home 24.7,

I told him that’s not fair especially since I suffered from physical discomfort. he made a deal with me and promised that everything will be 50/50 once I start working again. I told him I would find a job and he laughed and said “good luck” (I remember this vividly because of the strange laugh that I never heard him laugh before)

I started looking for a job again for months but had no luck til my friend’s husband found me a potential job at a company that would have me wfh due to physical strains. I was so excited and felt like I’m capable again despite the struggle, they scheduled an interview with me and when I told my husband he looked red in the face but said nothing.

2 days ago I found out that my job interview got cancelled, I found out when my friend reached out to ask why I did that but I said I had no Idea. I checked my email and found nothing because I didn’t send anything to the company. My husband came home and admitted cancelling the interview.

I asked why and he said that “this job had lots of requirments and I didn’t seem fit to be accepted there so to spare me the heartache of being rejected, he just cancelled the interview”. I flipped out on him and told him he destroyed my one and only chance at landing a job. but he said he was just feeling concerned about my wellbeing, I told him he probably didn’t want me to work cause he didn’t want to split house chores and he seemed offended by that.

He threw a fit about how unreasonable and selfish I was to even consider a job without speaking to him first. I told him I don’t get involved in his work life. He called me horrible for accusing him of bad intention then went out to meet his friends probably to vent because one of them told me that my husband is looking out for me but I was being cruel to him by yelling.

He has been cold shouldering me since then, deleted my social media accounts claiming that they’re bad for my mental health because of the negative affect some of those platforms have.

AITA for yelling at him?

The fact that this woman thinks she might be the problem in this scenario is so sad and scary, and Reddit was terrified for her. There wasn’t a single comment from the OP on the story in response to anything, but hopefully she read some of the hundreds and hundreds of comments telling her to leave. But we really hope she read some of them: