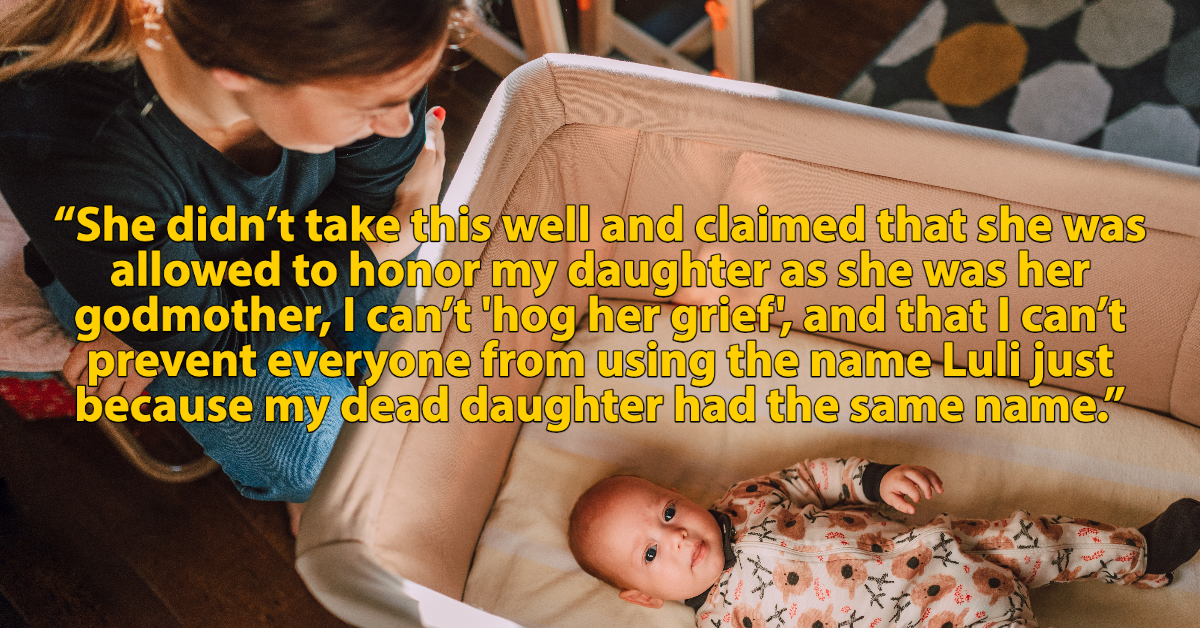 Naming a new baby after a loved one or family member is a great way to honor them. But what if the circumstances surrounding the naming are not ideal?

One Redditor who lost her daughter was shocked to find out that a friend of hers named her new baby after that deceased child.

The OP had no idea that her friend was using the name and found out on social media. The incident has caused trauma in the OP’s life, and she decided to decline being the new baby’s godmother.

“I have 4 children, with my youngest Luli having past away 3 years ago at 2 years old. One of my close friends since high school ‘Jane’ was Lulis godmother, although she wasn’t heavily involved in our lives as she was a chronic traveller.”

“Last month, Jane had her first child. They kept the gender a secret but Jane and I talked everything babies together as I’m her closest friend who has children, including names. When we talked baby names, Jane said she wasn’t going to do middle names for her kids as she found them pretentious. During this time, Jane asked if I would be her kids godmother, and I said yes. When her baby was born, her partner sent me a text letting me know they were both healthy and the baby was a girl.”

“The next day, Jane posted a ‘baby reveal’ on facebook and revealed the name of her baby, whose middle name was Luli. I was obviously in shock as Jane had never mentioned giving her daughter a middle name, let along the same name as my kid. Then on instagram, she posted the typical baby reveal photo holding her baby’s hand with the caption ‘Luli’ with a white heart. This was honestly too much for me so I turned off my phone. Nearly two weeks later, Jane reached out to my husband and asked if I was alright as she wasn’t able to get in touch with me and asked me to come by and meet her daughter. I almost didn’t but decided that maybe there was some explanation and agreed to come over. When Jane asked if I wanted to come over, she asked if I wanted to come over ‘to meet Luli’.”

“We made small talk and when she put down her daughter for a nap, I brought it up and asked why her daughter’s middle name is Luli. Jane told me she loved the name Luli since I’d used it, and since she was Luli’s godmother, she used it as her daughters middle name to honor my daughter. I asked why she didn’t tell me she was planning on honoring my daughter, and that I was blindsided finding out via social media. She told me she had just given birth and was recovering from the experience (which I 100% understand), but when I asked if she had decided to honor my daughter before or after she’d given birth, she asked me to leave.”

“A few days later she called and talked to me about her daughter’s upcoming christening and our role as godparents. I cut her off and told her that I was sorry but I wasn’t able to be her kids godmother. She didn’t take this well and claimed that she was allowed to honor my daughter as she was her godmother, I can’t ‘hog her grief’, and that I can’t prevent everyone from using the name Luli just because my dead daughter had the same name.”

“So I’m here on reddit for an outsider pov. I obviously can’t claim the name Luli nor do I want to micromanage how someone else grieves. I’m definitely not looking at this from an unbiased perspective and if I’m overreacting or being irrational overing this, I want to change that. AITA? Also before it gets mentioned, I’ve been in therapy since Luli was sick so I don’t need that recommendation – I’m already on it.”

“NTA. Holy hell, your ‘friend’ is an insensitive asshole. She should have asked before using that name. Sure, she didn’t ‘need’ your permission. But someone who cares about you would have certainly asked and respected your decision. Your grief takes priority over hers. For her to say you can’t ‘hog her grief’ is selfish and is a means of turning the tables on you. This situation reeks of using your daughter’s death as a way to get attention and sympathy for herself. My heart goes out to you. I hope the rest of your support system is better than this woman,” said holyylemons.

“My heart goes out to you, losing a child is a painful grief, please accept my condolences for your loss. NTA If she wanted to ‘honor’ your daughter she should have spoken to you not ‘reveal’ her daughter’s name on some cheesy social media post. No friend would be so insensitive to blindside grieving parent. And as for hogging grief, I have no words. Cut this woman out of your life, she’s a cancer,” advised laude_nam.

“NTA – This was definitely something that needed to be discussed beforehand. Also if it’s her middle name, which yes is a lesser used name, then why does it seem that it’s being used as her first name? I am sure grief is colouring this whole thing but I think she did some shady shit,” said Dulcet-Sins.

“NTA. You lost a child. Your grief and your wishes should have been central. Your friend doesn’t get to prioritize her feelings about your deceased daughter over the feelings of the actual mother. You not being the Godmother is a natural consequence of her taking your dead child’s name without permission,” said mindful-bed-slug.