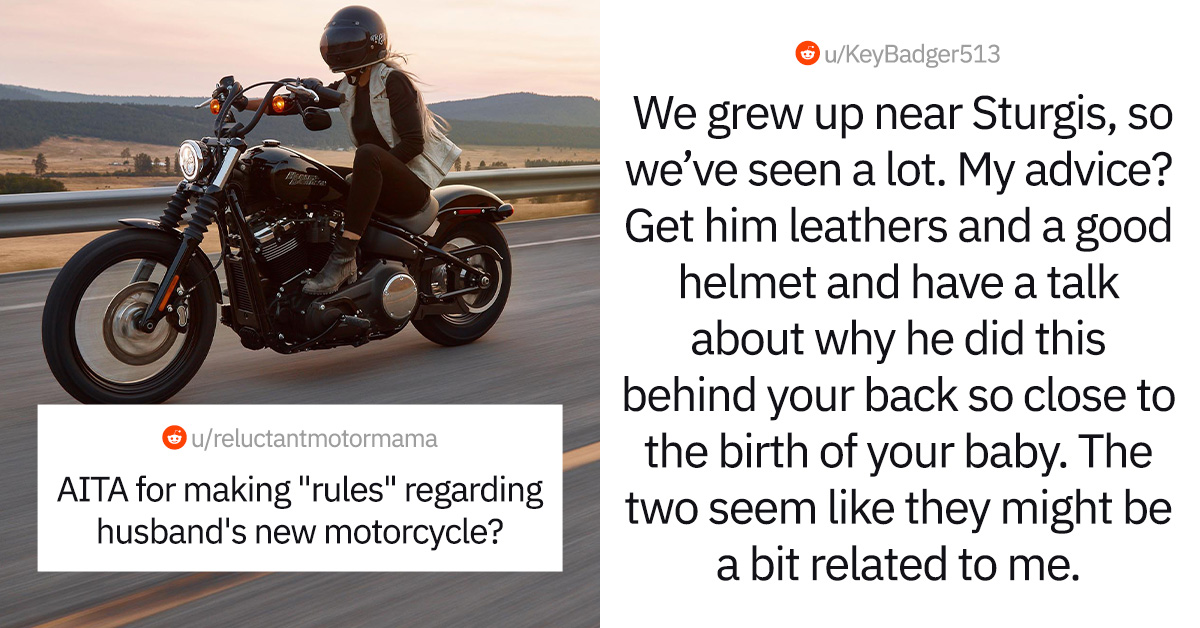 Relationships are all about compromise. Particularly while navigating through disagreement. Both parties have to land at a place that makes each other feel heard. When it doesn’t go smoothly, it can be frustrating.

In the case of this Redditor, it hasn’t been the easiest. Her husband bought a motorcycle without discussing it first. Many people would take issue with that alone, but. with a 6-month-old baby, she has a very reasonable concern for his safety, so she came up with some pretty strict (but fair) rules for using the bike.

After her husband bought a motorcycle without discussing the $6,000 purchase, she agreed he can keep it as long as he follows some rules.

So now, she’s turned to the popular subreddit “Am I The A**hole?” (AITA) to find out if she was wrong for being so “strict” with the rules for riding his motorcycle. Here’s what she said:

My husband, unbeknownst to me, bought a motorcycle from his best friend at work. It’s a sturdy, old Honda from the early aughts in near-mint condition.

I’m horrified. My mother is a nurse and raised us to believe, “We have a term in the ER for motorcyclists, we call them organ donors.” She made my brother and I promise never to ride on or get one.

We have a beautiful 6-month-old baby at home, our first.

Initially, I demanded he return it, but he said it was his “lifelong dream” to own a bike & kept saying how great it would be on gas.

EDIT: yes he knew my views on bikes before we got married & every time he brought it up I asked him not to do it

I knew he was interested in bikes, but none of this “lifelong dream” stuff

EDIT: of course, it goes w/o saying he would have to have “safety gear,” a decent helmet, & pass the course required to obtain your license. In our state, helmets are mandatory

I said he can also take it up to the lake where he and his friend go fishing if he promises he won’t drive it over 30 mph and stays off the highway, IOW, tows it up there on a trailer behind our car.

EDIT: what I mean here is don’t take it on roads where the speed limit is over 30mph or out on the highway. The roads in our neighborhood & around the lake have a posted 25 MPH speed limit.

the whole point of the “riding rules,” which admittedly aren’t great, is I’m trying to find a reasonable compromise b/c he is insistent on keeping it. I mean, I’m nursing this baby and changing her diapers all day and I can’t stand thinking about this anymore

He says I’m being a controlling harpy and sucking all the fun out of his new toy.

All I can see is him splat all over the asphalt and our daughter asked me “Why is my Daddy in Heaven?” one day.

LAST EDIT: we cannot afford “extra” life insurance, especially since my husband just suddenly spent 6k on a new bike. his life insurance is through his work, and it’s just the average policy

Readers had mixed reactions, although most sided with OP. Here’s what commenters had to say: 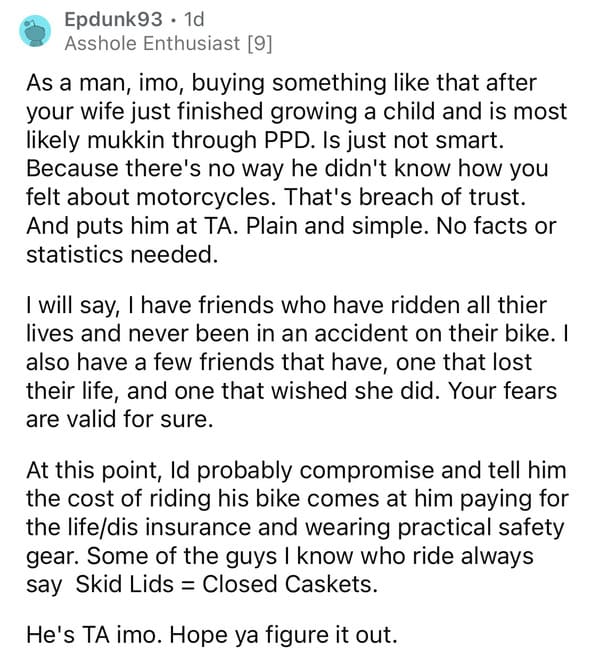 Some shared stories from their friend’s experiences 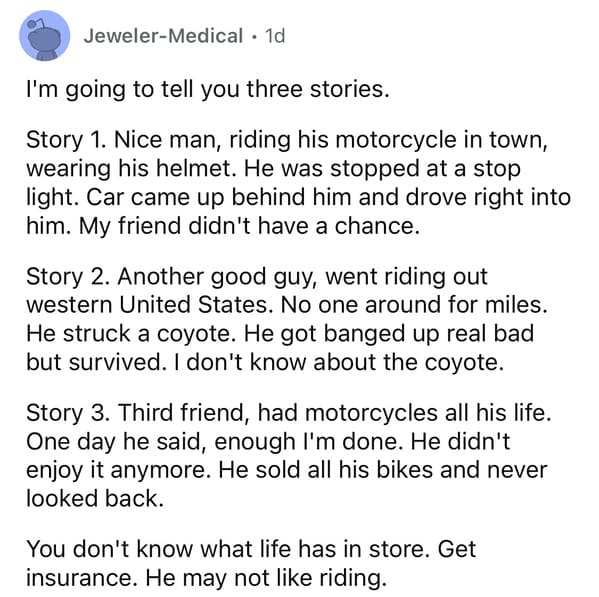 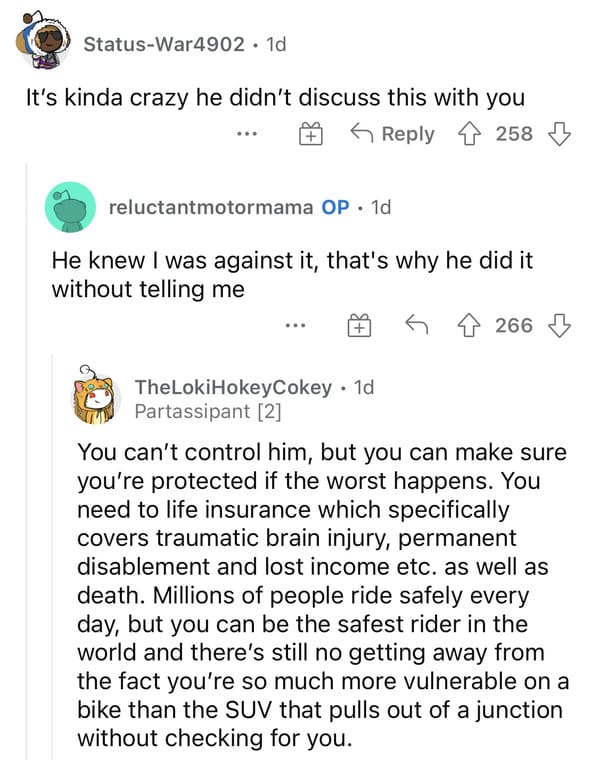 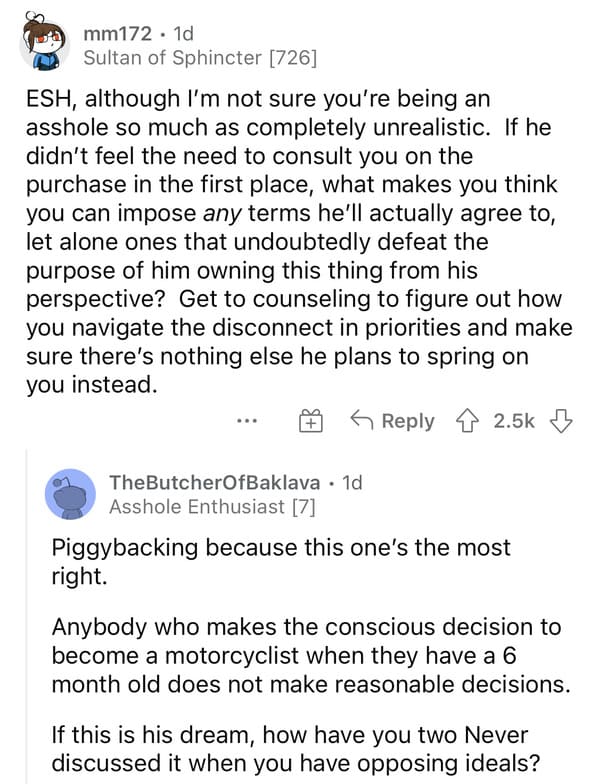 Someone even suggested beefing up his life insurance 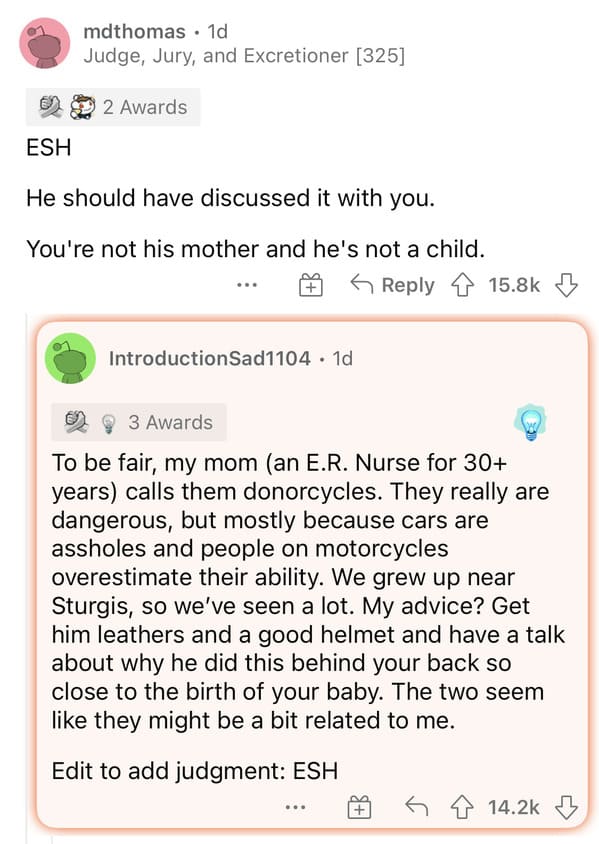 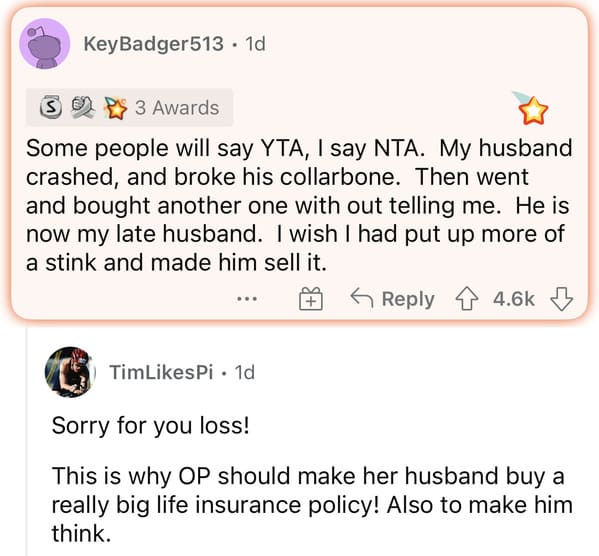 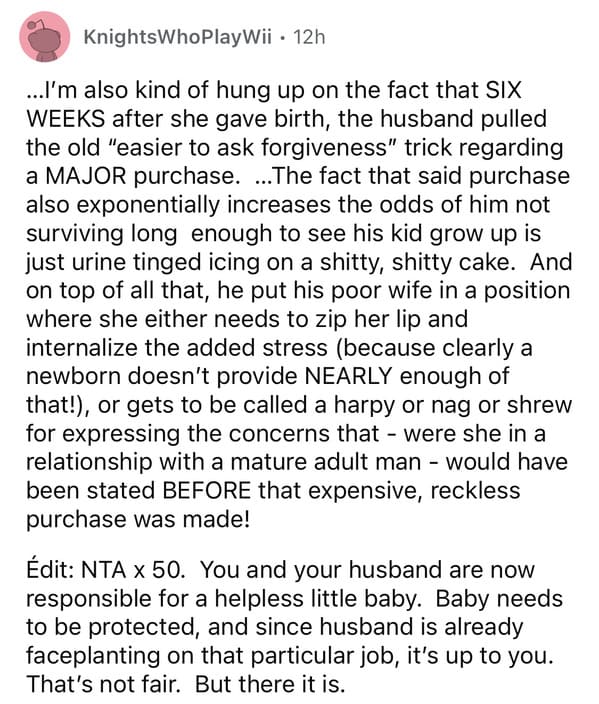 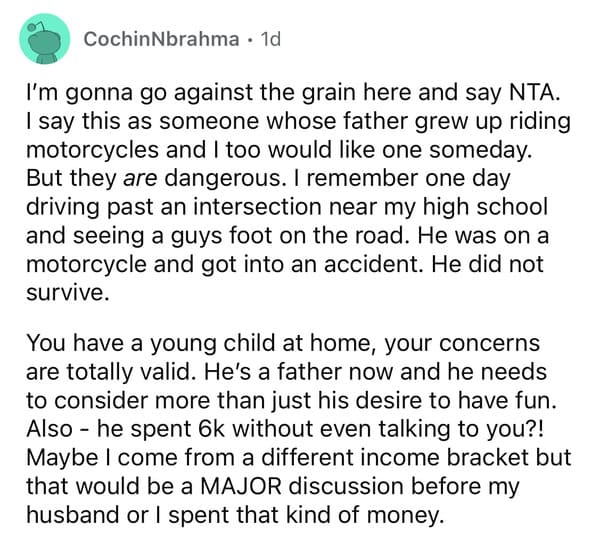 Commenters called out how the husband knew how she would react, and did it anyway 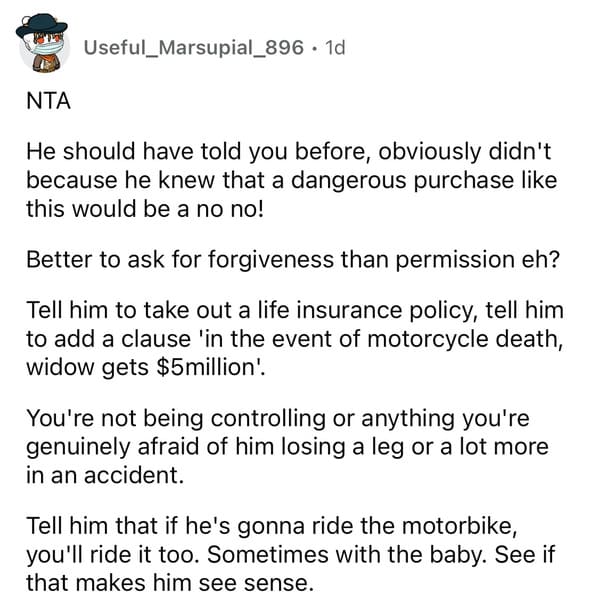 Lif insurance came up a lot. OP addressed this in an edit to her original post. 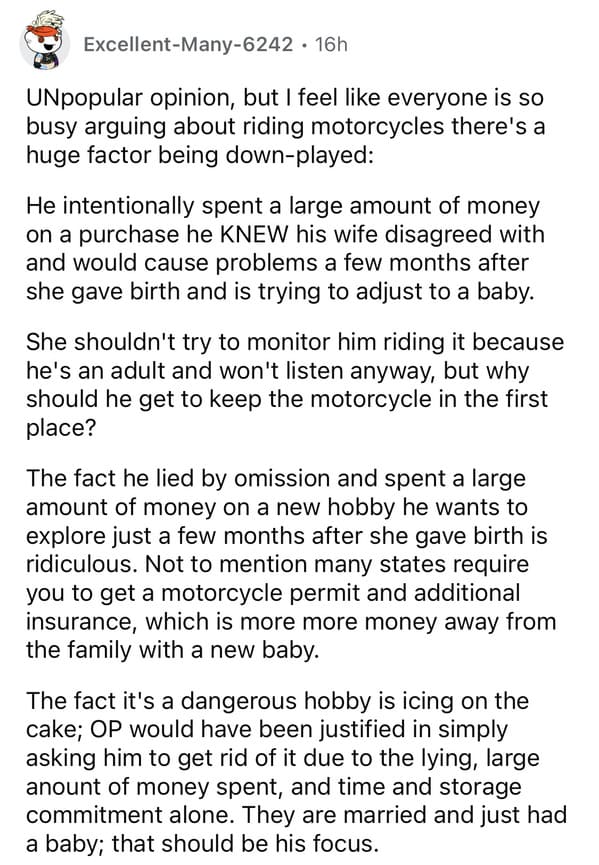 These 2 commenters discuss her rules for riding the bike. One thinks it’s too harsh 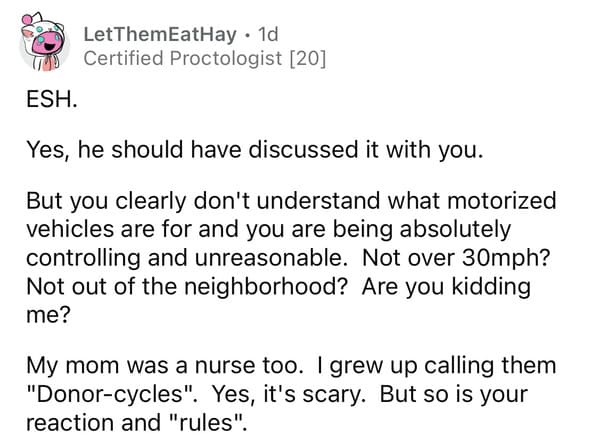 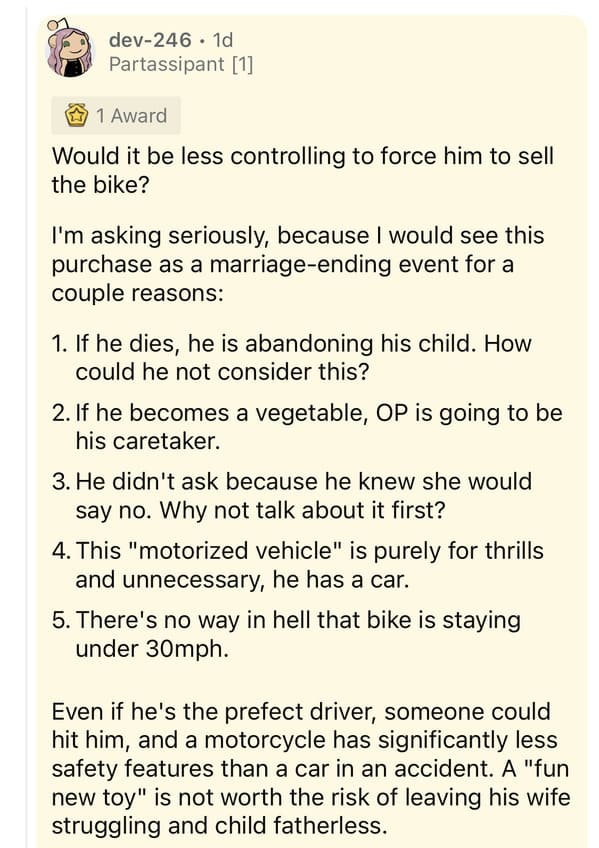