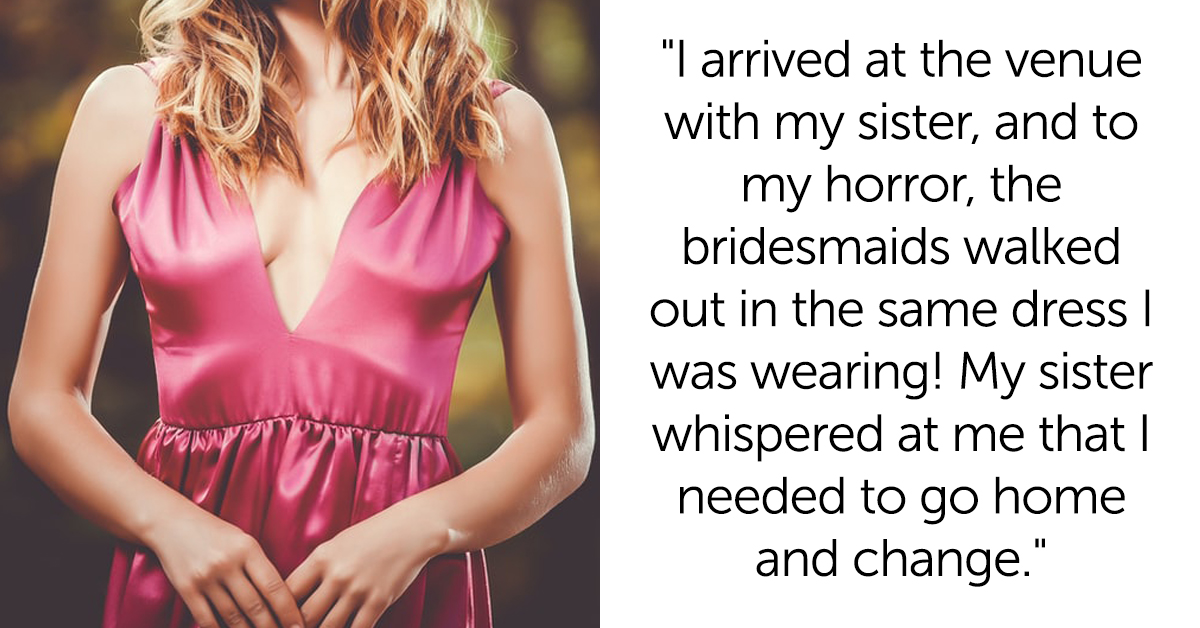 Y’all, I’m over here hoping beyond hope that this woman is not found guilty by the Redditors of the sub AITA because this has happened to me.

I attended one of my very good friend’s weddings a few years ago and showed up in this gorgeous dark blue dress. Perfect color for me. Super pretty!

And then I stepped onto the grounds and was ushered inside the building where my friend was preparing, signing documents, and doing other WEDDING things.

Her entire bridal party was wearing the exact same color. OOPS! My pal and I laughed and laughed and it’s still a great story: no feelings hurt here! But I have an inkling that poor u/aita095 didn’t have quite as easy a time…

Title sounds bad but hear me out. I (25F) attended my cousin’s (30M) wedding a few weeks ago, wearing a long, dark blue dress I had gotten from the thrift store. It was absolutely gorgeous and I thought it would be perfect, as the invitation said formal attire. I had looked the brand of the dress up online after I bought it, and while I realized it was a bridesmaid dress from a bridal company, I assumed that someone had donated it after a wedding.

I arrived at the venue with my sister (27F), and to my horror, the bridesmaids walked out in the same dress I was wearing!

Whoops, there it goes: OP watches the bridesmaids walk out wearing the exact same dress.

My sister whispered at me that I needed to go home and change (we live close by, but I feel like that would’ve been a big hassle). Instead, I decided the best course of action would go up to the bride (30F), introduce myself, and let her know I had had no idea that was the dress the bridesmaids would be wearing. She laughed it off and said it was fine, but I could tell she was slightly annoyed at the whole situation, and one of the bridesmaids was practically shooting daggers at me the rest of the night.

OP’s sister suggested they pop back home so OP could change, but OP thought that sounded silly. She met the bride and let her know that the dress was just a weird fluke; the bride laughed about it, but it seemed to irk her a little.

I just got off the phone with my cousin today, and he said that he didn’t think I did anything wrong, but the bride thought that it was rude of me to not ask what the bridesmaids were wearing, since I knew I had bought an old bridesmaid dress. My sister agrees with him, but my mom and friends say that it’s not like I was wearing white or anything, and it wasn’t that big of a deal. AITA?

OP’s cousin let her know later that while he didn’t think she did anything wrong, the bride thought it was rude not to check on the outfits since OP had knowingly bought an old bridesmaid dress. Her sister agrees but other family members say naw.

Edit with important info: my sister, who is closer to the bride than I am, found out that there was a bridesmaid that was uninvited last minute. So the dress I found at the thrift store was probably her dress. Just small town things🙄

This edit slayed me: apparently the thrifted dress was probably a disinvited ex-bridesmaid’s dress. Amazing.