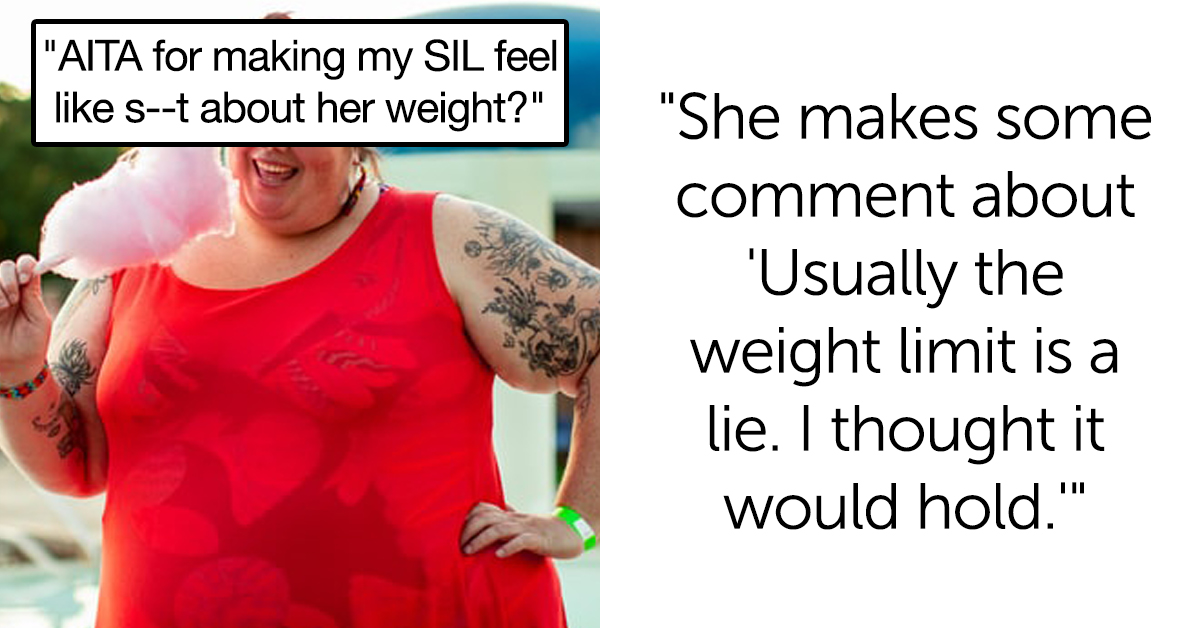 Someone’s weight is a very tough subject to broach and add in-laws to the mix, it’s bound to be a rough conversation.

Fickle-Life-9867 recently asked the Reddit community in the AITA sub about a familial spat she got into with her sister-in-law over a gift, a weight limit, and the sister-in-law’s weight. The altercation ended up destroying something OP really cared about and hurting members of OP’s family. Let’s take a look.

OP explains that her son gave her a very expensive, very nice swinging hammock chair. It was way more than anything she expected from her kids and she was very excited about it.

35F and my SIL is 46F. I have 3 children, the oldest being 16M. For my birthday last week my son went out and bought me this swinging hammock chair that I had been wanting for 2 years and it cost him quite a bit of his saved money (which I fully intend to put back in to his bank account so he can continue saving). He was so excited to see me open this gift and couldnt wait to help me set it up. I told him he shouldnt have, that it was a lot of money and his response was “You never get anything nice. I wanted you to have it.” And it was true. I usually dont get anything for my birthday or Christmases outside of Tupperware or soaps. So it might sound stupid but I have cherished this swing ever since he got it for me, especially where I finally have something nice that’s mine.

Her sister-in-law visited and is on the heavier side. OP asked her not to sit on the swing, explaining there was a weight limit. OP headed inside and then heard a crash.

My SIL comes over once a week to see all of us and she immediately headed straight for my swing (which my son hooked up on our deck). I told her to please not sit on it and she said “Is there a weight limit?” So I told her yes, 250lbs and I even showed her the box to confirm. She was not upset about this. She just said “That’s a bummer, they need to make something capable of holding us big girls”. I simply agreed with her and went about my business. At this point my husband shows up from work.

The SIL had sat on the swing and it broke.

When I went inside to grab us some drinks her and my husband are talking on the porch and not even 5 minutes later I hear a loud crash and my husband say “Fuck, are you alright?” I go out and sure enough she had sat in my swing and the crochet netting around the hook snapped on one side, causing her to fall right on her ass. She is sitting there laughing, gets up and says “I guess i need to learn to listen.”

The SIL made a crack at her own expense, but OP lost her temper. Things escalated and, obviously, the SIL didn’t offer to pay for the swing (would you, if you were being yelled at?) and things ended poorly.

So I lost it. As I said above, I literally never get anything nice. Never. This is the one thing that I had that was mine and it didnt even take someone a freaking week before they ruined it for me. So I said “I literally just fucking told you not even 20 minutes ago that it would not hold you and to please not fucking sit in it.” She makes some comment about “Usually the weight limit is a lie. I thought it would hold.” So I said “The weight limit probably would have held if you were only 50lbs heavier than it, not 150.” (She is 420ish lbs because she is one of those girls who eat food on camera for money and she absolutely loves her weight). But regardless, instead of apologizing or offering to compensate me for my destroyed item, she has resorted to saying I’m a shit bag for making her feel like her weight is a problem and my husband is on her side. “Its just a fucking swing”. AITA?

Here’s my take: OP’s an asshole for yelling, she would’ve had an easy fix for this if she’d not cursed at her SIL. And, yeah, it’s just a frigging swing.