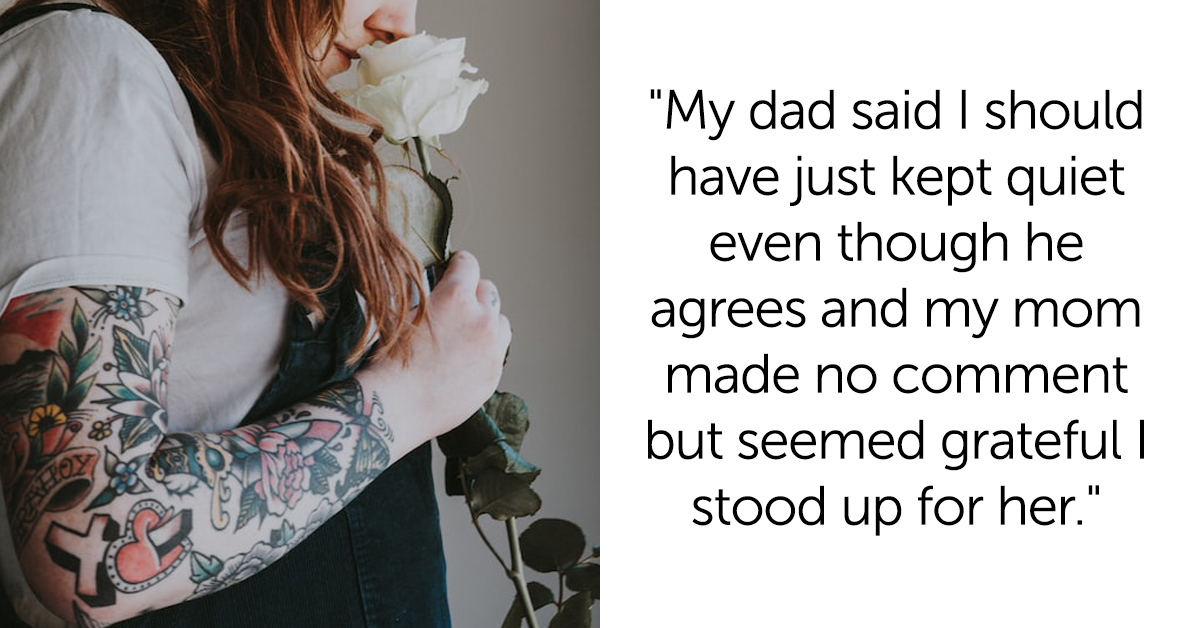 Redditor u/SisTatDrama96 recently asked the AITA subreddit on Reddit if she was in the wrong for disliking her sister’s tattoo plans. The story is involved, so before I hand down my verdict, let’s make sure we get all the facts.

OP’s older sister has a strained relationship with their parents. OP does not. When the sister went to college, she found a surrogate mother figure in one of her professors.

My sis N has always had a strained relationship with our parents especially my mom. I am clearly not privy to the reasons because things are fine with me and my parents. When N went to college she met her creative writing professor as a freshman and they got close immediately. They would do a lot together and worked closely on a few different writing projects. N never specifically said this, but it was obvious to anyone who saw them interact that they had a substitute mother/daughter type relationship.

This hurt her real mother and OP thought his sister “would grow out of it”.

Which hurt my mom a lot to see. I always thought she’d grow out of it or that the prof would move on but ten years later they were still very close.

The professor died about a month ago and the sister was very upset. OP seems more concerned that she was unhappy in front of their mother.

About a month ago the prof died unexpectedly and it devastated N. She was really dperessed over the holidays which of course was all in front of my mom and was a difficult reminder that N loved the prof as a mother way more than she ever loved my mom as a mother.

OP explains that there doesn’t seem to be active issues between his sister and parents, but she’s distant at best.

She still talks to my parents and stuff and they don’t fight or anything but N is very distant and doesn’t tell them anything about her life beyond the bare minimum. My mom tried to comfort N but N was doing her distant thing and didn’t want comfort.

The sister also had an injury due to the nature of when she found out about her professor dying. The burn was very bad.

Something unfortunate that happened to N is that when she got the call that she died, she was brewing tea and in the shock of the news she spilled boiling water on her arm which burned her kinda badly on her wrist. I think the burn was like on the borderline of 2nd and 3rd degree, and definitely still looked pretty rough during the holidays. N said it was especially hard because in addition to the physical pain, every time she looks at it she is reminded of the moment she found out the prof died. Which I totally get.

The sister’s plan is to cover the scarring with a tattoo of a flower that the professor gave her for her graduation. Her actual mother didn’t get OP’s sister’s flowers, so apparently this embarrassed her.

I was on facetime with N and she said she talked to her tattoo artist friend who said that the burn should be able to heal well enough to get a tattoo over it. N then excitedly told me about her idea which is a type of flower that the prof gave her a bouquet of for her undergrad graduation. My mom was so embarrassed that day because she didn’t get N flowers but the prof did and N was parading them around so happy and it was a reminder of their connection. I guess N and the prof exchanged these flowers for every special occasion like birthdays etc.

I can’t fathom what OP is thinking here: he told his sister that this tattoo would be “cruel” to their mother.

So now she wants to get a decent sized tattoo in a highly visible spot of something that will remind everyone of the prof. I told N that this seemed really cruel to my mom who already feels cast aside and like she’s in exile from N. And that’s without the constant permanent reminder.

His sister rightly called him an ass and stopped talking to OP.

N kind of scoffed and said “I can’t believe you think you have the right to tell me not to do this,” called me an ass and hung up and is still not talking to me except for a very brief text saying congrats for a promotion I just got. My parents aren’t commenting. My dad said I should have just kept quiet even though he agrees and my mom made no comment but seemed grateful I stood up for her. I feel like I was just being protective of my mom. But AITA?

Reddit was quick on this one: what a dick!

What you have described is the golden child and the scapegoat child. You being the golden child. N didn’t get what she needed from her own mother and was incredibly fortunate that another stepped in and took on that role.

Take your blinders off and see. Ask your sister if she felt second best growing up, and be open (and silent) when, and to what, she tells you.

Another user wrote, “YTA. It’s OK if you and your sister have different relationships with your mom. Trying to make your sister see your mom.just like you do is not going to work.”

For starters… your sister’s body belongs to her. You do not have a say in what goes on it. You can approve or disprove all you like, but it’s her decision.

You sister lost a very close friend and person in her life and would like to get a meaningful tattoo to represent that relationship and honor that loss. There is no cruelty in that tattoo. There is only cruelty in the minds of people who think it’s somehow about them when it is not in ANY way