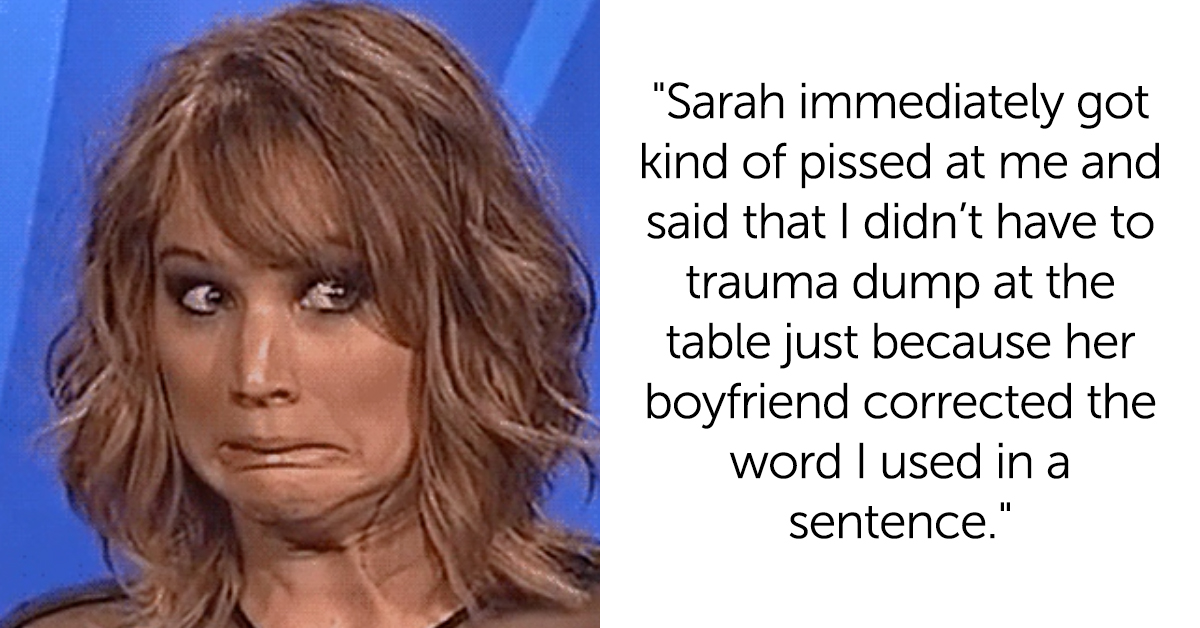 We have an AITA question today from u/aitathrowaway1356 who wants to know if she was wrong for “trauma dumping” after a friend’s boyfriend tried to correct her English.

Trauma dumping, for those not in the know, is a term used to describe an oversharing. The Cleveland Clinic‘s Dr. Prewitt explains, “Trauma dumping refers to the oversharing of difficult emotions and thoughts with others. It is not a clinical term used by mental health providers, but people who engage in ‘trauma dumping’ often share traumatic events or stressful situations with others during inappropriate times.”

So let’s visit OP’s story and see if she was, in fact, wrong to “trauma dump” (or even if she DID).

OP was out with some friends and though English isn’t her first language, she seems to have a decent command of the language.

Her friends are fine with it and know that sometimes there may be a goof, but it’s not something she needs corrected if they get it. Fair!

English isn’t my first language, so I do have a bit of an accent when I say certain words, and sometimes I fumble a bit grammatically but it’s never been too bad that no one knew what I was getting at. My friends all know this, and they also know that if I’m not asking to be corrected and the sentence is understandable, they don’t really need to correct me.

A friend’s new boyfriend noticed the accent and asked about it.

Sam noticed while we were talking that I had an accent, so he asked me where I was from. I said that my dad is from the US but my mom was from Brazil, so I spoke Portuguese and sometimes Spanish at home but I only ever learned how to read/write in English.

When OP told him her mom was from Brazil, this jerk-off laughed at her and corrected her use of the past tense.

Sam kind of laughed and then said “Your mom was from Brazil? How does someone stop being Brazilian? The word you should have used was is.”

But OP’s mother had died so, uh, past tense was right. It got weird quickly and OP told him about the death and that her use of “was” was right.

My mom passed away when I was 12, pretty much everyone at the table (other than Sam) was aware of that. So it got a little awkward and quiet when he corrected me. I shook my head and told him that no, my mother didn’t stop being Brazilian, she just stopped being alive, so that’s why I said was.

Her friend(?? is this a friend?) got mad and told OP not to “trauma dump” (WT actual F). Lunch ended early and OP is being told off by multiple people in her friend group.

Sarah immediately got kind of pissed at me and said that I didn’t have to trauma dump at the table just because her boyfriend corrected the word I used in a sentence. I said that I wasn’t really trauma dumping, I was just answering his question, but she said that I should have known how awkward it would get when I said something like that, and I should have just moved on without addressing it.

Lunch ended early because of the tension, and everyone else is telling me that yeah I didn’t really have to say it, but also I really was just responding to what he said to me.

So OP wants to know: did she screw up?

Sarah’s pissed at me though, and I’ve got no idea how Sam feels about the whole thing because I don’t really know him.

I wanted to know if I messed up here? And if I should apologize.

NTA. That is not trauma dumping. Trauma dumping is is a consistent pattern of oversharing when one ‘dumps’ their difficult, stressful, or traumatic feelings on others. You offering a simple explanation is NOT that.

Another person said, “NTA. I’m sorry for your loss. And I’m sorry that you have a “friend” who is more interested in covering for her boyfriend’s inexcusable rudeness than she is in comforting you.”