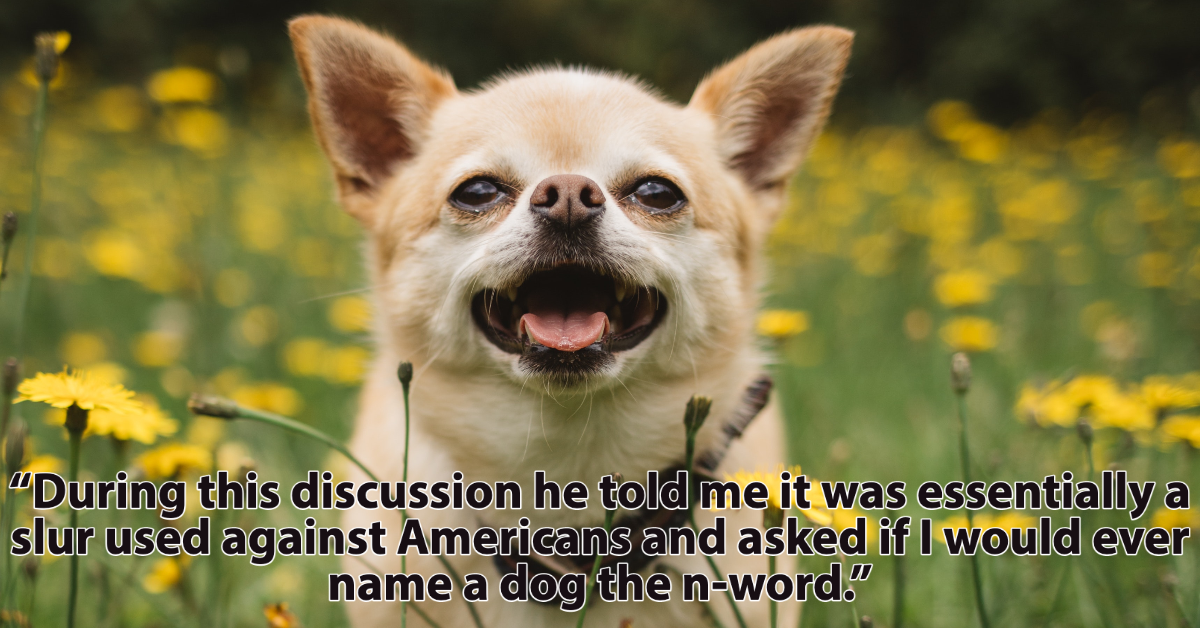 Some of them are quite silly, others can be formal — sounding like a member of the British aristocracy. But has a dog’s name every offended you?

One Redditor with an Akita recently got into an argument with her sister’s boyfriend, who thinks the name is offensive.

Should she change the dog’s name?

Oh, you’re probably wondering what that name is…

Here we go, from OP:

“I have several dogs, one of which is an American Akita. His name is Yankee. I thought it was funny, and he seems to like his name. My sister was in the states the past two years and recently flew home with her boyfriend in tow. First time we’ve met him, yada yada. I guess she never mentioned me or my dogs, but he was pretty surprised when I told him my dogs name. I didn’t think much of it — most of my pets have peculiar names so I assumed it was just an overall reaction,” the OP writes.

“They left, my partner and I had dinner. Part way through our food my sister called and asked if I’d consider changing my dog’s name. I kind of thought she was kidding, but she reiterated that she was serious. The name Yankee had upset her boyfriend, quite badly, and he found it offensive. I basically told her to f*ck off and tell him to grow up, before going back to my food.”

Read also: 29 Weird Dog Behaviors Every Dog Owner Should Know, As Shared By This TikTok Account

“The following day they literally show up at my door. I was kind of taken aback – apparently they came to tell me why the name Yankee was so awful. During this discussion he told me it was essentially a slur used against Americans and asked if I would ever name a dog the n-word. I just kind of laughed and told him he was off his nut. It’s not that serious. You can’t equate the word Yankee to something like the n-word.”

“I told him I wasn’t going to change my dogs name – he knows it, it’d be a sh*t ton of work. He’s personal protection so it could even damage his work. They, thankfully, left, but still seemed pretty upset. Thinking back now I’m pretty sure theres a company with Yankee in the name? I wonder how many letters of complaint he’s sent. Anyway, I did message my American friends just to make sure I wasn’t being a prick. They all agreed he was being stupid, but I know the US is huge and it might be more of a regional thing? So I’m still not sure. I am starting to feel kind of a**hole-ish for not taking him seriously when it may be a genuine issue for him.”

Yeah, no, I don’t know what’s up with this guy. What do Redditors think?

“NTA. And your sister has managed to find the only American who thinks the term is offensive in any way,” said TaliesinWI.

“NTA. He’s being an A H by comparing Yankee (incidentally an official part in the military phonetic alphabet) to an actual racist slur. Keep the name and keep away from that bf. He’s looking to start trouble, and the direction of travel from trivialising racism isn’t pretty. I’d be expecting him to start talking about reverse racism and diversity quotas soon. Set your boundaries while you can or risk being associated with such ice cold takes yourself,” explained Melodramatic_Raven.

“NTA – Yankee is what people called the Americans who didn’t want to enslave black people so if he is offended by that he is probably a southern racist,” suggested Successful_Log_5470.

“Yea. It’s definitely a slur. That’s why we have the entire New York Yankees baseball team. And, Yankee Candle, and Yankee Doodle. NTA. It’s not a slur,” said tubesweaterguru.