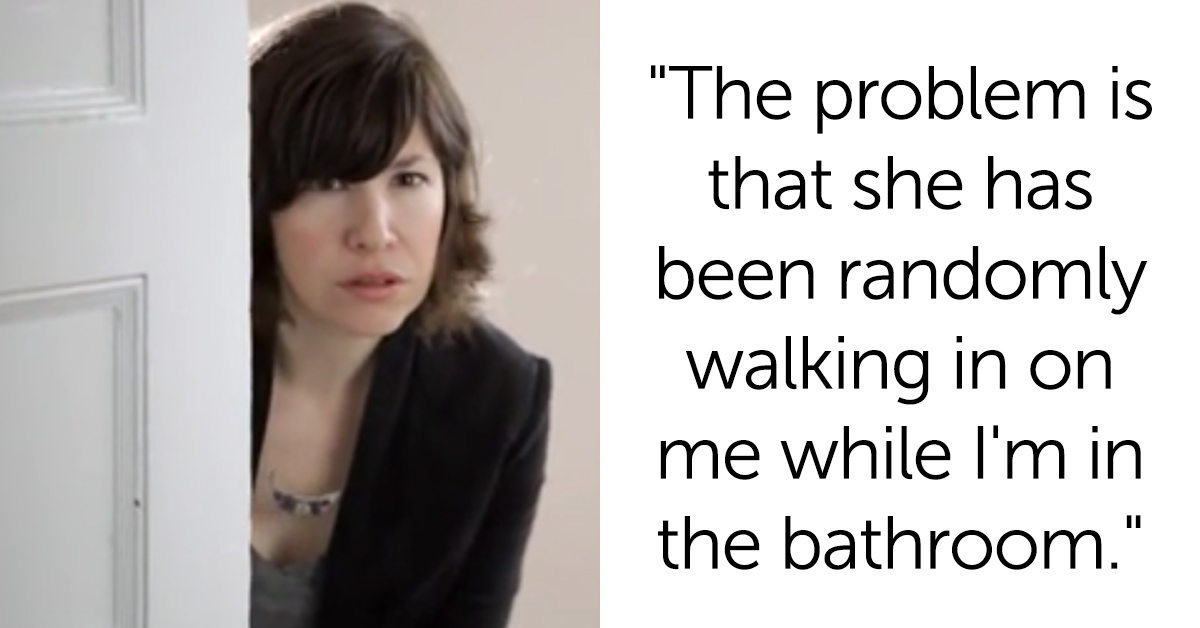 I am kind of boggled by the very premise of a mother-in-law who walks into the bathroom while her daughter-in-law is using it, but u/Positive_Balance3756 claims that that very thing is happening to her. Can you imagine how uncomfortable that must make this poor woman? Surely her husband takes her si–

OP explains that her MIL is staying with them for a few weeks.

So, my MIL (I’m a gal btw lol) came to stay with us for few weeks til her home is renovated for christmas.

But apparently likes to walk in on OP while OP is using the bathroom? WTF?

The problem is that she has been randomly walking in on me while I’m in the bathroom. Thankfully not once has she seen me naked because I started picking up on her behavior after the second time in a week.

The MIL has repeatedly done this — to the point where OP is like, this cannot possibly be accidental anymore. She tried talking to her husband but he dismissed her.

She’d barge in, then turns and says “oh sorry” then close the door. I tried talking to my husband about it but he kept ignoring me then flatout said “so what if she accidently seen you naked? She’s faaaammmillly!!”. He seriously said that!.

OP DOES have a lock but apparently is so traumatized by an incident she can’t use it. Seems …stupid, but okay.

We have a lock and I could’ve used it but I have past trauma from the idea of locking/being locked in a room after my brother locked me in the bathroom when I was 5.

So instead of just locking the door, OP waits for her MIL to barge in & then gets herself into a bizarre position.

So I came up with this idea. I’d go inside the bathroom pretending to use it and wait for her to come (cause honestly? It’s deliberate at the this point). When she “accidently” barges in she’d see me in a weird/awkward position. For example doing a ballet stand, standing on the toilet, or standing facing the wall with my hands up, (fully clothed of course). I could see how awkward and weird this would be for her because she’d stand there for few seconds trying to figure out what I was doing.

It was funny at first, but then the MIL told OP’s husband and he got MAD AT HER. Her husband pointed out the lock and TBH, yes, but also, what the actual hell is his mom doing?

It was halirious at first seeing her initial confusion but she told my husband about it claiming “she’s caught me practicing rituals in the bathroom”. I cleared things up and revealed the reason why. My husband was livid. He called me childish and said that I made his mom feel “terrified/weirded out” by my behavior. He said I should’ve acted maturely and locked the damn door instead of playing mind games.

OP also added an edit explaining that her mother in law is still very upset and her husband thinks she is owed an apology.

Edit. Lol. Um what? I just came back on here and saw literally 1000s? of people? OMG now I feel embarrassed Glad I went anonymous Lol. But seriously…I’m looking at my screen and am like ….I’m famous? Seriously though…My husband and his mom are extremely upset with me. He still thinks it was ridiculous and is demanding an apology before she goes back to her home. I’m not sure if I will apologize because yes while it was a “me problem” that I couldn’t use the lock. It’s still feels wrong what she did and maybe I’m wrong too but at least I got (so did you apparently lol) a bit of a chuckle out of it 😅🤣 also, I’m sure Thanksgiving dinner will hella awkward tomorrow. Especially after what happened. Lol.

Reddit was firmly on the side of OP. One user wrote, “NTA. You went the funny way and that’s dope. Your husband, however, is an asshole. He expects YOU to be mature about it, but he doesn’t expect his mother to KNOCK ON THE FUCKING DOOR before walking in?”

Another was absolutely boggled by the story. “So he’s mad at you because she barges in on you IN THE BATHROOM… in YOUR home… that she is a guest in? But- Gets mad at you for weirding her out and causing her ‘grief’?”

Some people had ideas to really drive home the point that MIL was out of line. “Humor her Stop posing, but look at your watch seriously while facing the door like you’re waiting for a kid after curfew. Then sigh disappointedly and shake your head “14 seconds MIL. That’s terrible. You will need to do better” Alternatively- shove a towel under the door NTA,” wrote one person.