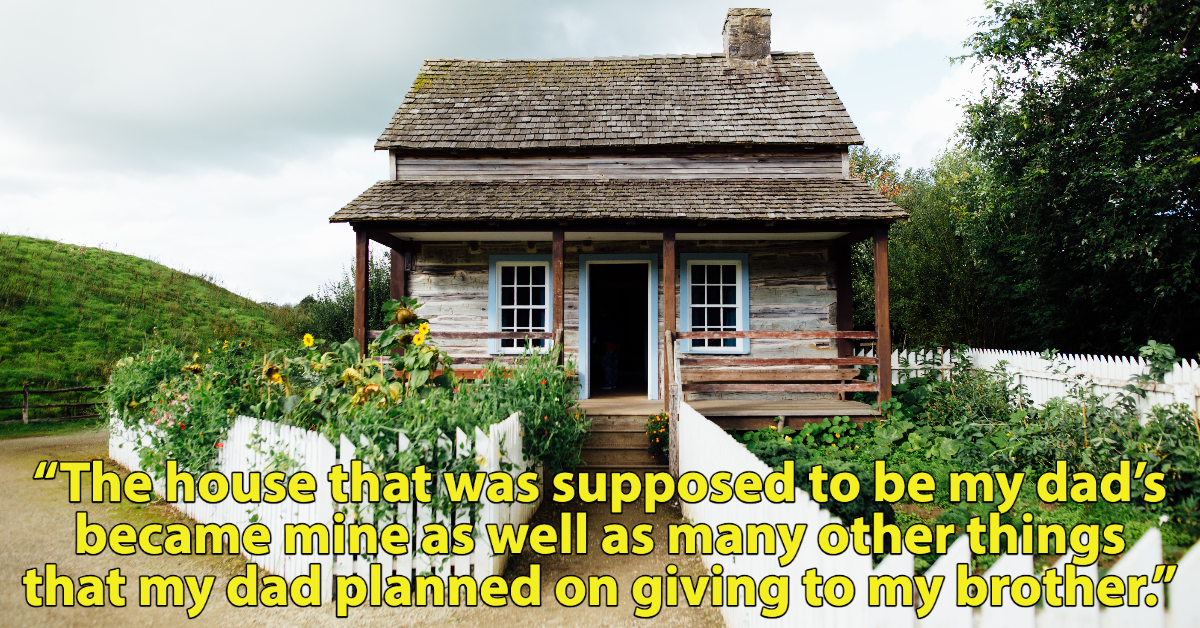 Sometimes, your grandparents are closer to you than your own parents. They share your values, support your dreams, and take care of you. One Redditor who had a loving relationship with her grandfather was devastated when he passed. And when she found out he had left her his beautiful home instead of giving it to the men in her family, she was shocked and conflicted. While she cared for him, her family abandoned him — but she doesn’t need the house as much as her brother. What should she do?

“I (f 29) was raised in a Christian household. With that came gender roles that were ingrained in me at a young age. My granddad however hated that my parents taught us this way and as I got older I did too. Because of this I became very close with my grandparents instead of my own parents. I also have an older brother that my parents labeled ‘the second king of the house.'”

“For more info (important) my grandparents lived in a beautiful house that had no neighbors, many trees, and a garden. They payed off the house after years and was very special to them. My granddad also had bad problems with his back and a condition that would get worse until he couldn’t go on anymore. After my grandmother passed he got worse and ended up needing at home care. He didn’t want a stranger in his home so that wasn’t an option (I think it was due to my grandmother passing). My parents preached that it was punishment for all his sins so they wouldn’t take care of him and were planning on putting him in a home. I decided to stay with him since it would just be easier, my job can be worked effectively at home and he’d get care from someone who isn’t a total stranger.”

“In the time I took care of him we filled the home with the love and laughter my grandmother brought to it. As my granddad got worse not a single call. Not from my mom, or dad, or my brother. We were joking about it once and he said ‘maybe I should just give you missy (the houses name lol) instead of your dad, he’s just gonna give it to your brother anyway’ he laughed after he said that so I assumed he was joking.”

“Fast forward, the worst happened. I was the one who found him. Had to make the call. All of it. As much as I was pushed away from my parents I didn’t want them to find out the news from a random person. The funeral was the first time I ever truly connected with my parents in years. We hugged and cried together and we were all vulnerable. But then it came time for the will. Now it wasn’t some telenovela with all the dramatics but it was intense. The house that was supposed to be my dad’s became mine as well as many other things that my dad planned on giving to my brother.”

“I was accused of manipulating my granddad into giving it to me and my brother was just yelling. A week after my brother came to the house in tears. He was begging me to give him the house since his was too small for his wife and baby. He argued that because it’s just me and my husband and we don’t want kids I don’t need it. I told him to leave and felt horrible. I feel like an a*shole and so does my family. He’s right I don’t need the house, my job pays me good money and I could easily just live somewhere else. On the other hand though my granddad wouldn’t want him OR my dad to have it. I am at a loss here. AITA?”

What should the OP do? Honor her grandfather’s wishes or pass the house on to her brother?

“NTA. ‘It was punishment for all his sins.’ They shouldn’t want the house of a sinner, it’s defiled by him living there. And aren’t they Christians? Remind them of ‘You shall not covet your neighbor’s house.’ On all seriousness, your grandpa gave it to YOU. He wanted YOU to live in a house he loved and lived on, he wanted to give that for YOU. Giving it away to someone who insulted him and treated him as less than is almost an insult to his memory. Allow yourself to have what you deserve and what other people wanted to give you,” advised

“Reading OP’s post, I could literally feel the love and happiness and positive energy between her and her grandfather, and had quick mental pictures of them laughing by the fireplace on a cold winter night, or sitting in his garden at sunset in the summer, etc. OP is definitely NTA. Do not board the train of your family’s guilt trip. Judgmental Christians put my back up (and for the record, I’m a Christian),” said

“Hey OP I currently work as a hospice nurse… please don’t give your family an inch. They couldn’t give your grandfather a five minute phone call while he was alive but they think they are entitled to his home? Do not let them guilt you on this. You are the one who stepped up, thinking you would get nothing in return. You took care of your grandfather in the final days and allowed him to stay at home, literally the number one wish of almost every patient I take care of. The house is yours. NTA,” said

Change ALL the locks. Install security cameras. Do all the legal due diligence you need to do to make sure everything is in your name. Create a will stating that should you pass and your husband is still alive, the house goes to him. If he is also gone, then the house goes to ‘Insert your favorite charity.’ Enjoy that house. Your grandparents WANTED you to have it. If they had wanted anyone in your family to get anything…they would have left it to them. You would be disrespecting and dishonoring your grandparents if you gave in to your family’s demands. Go no contact with your family. They are who they are. And you don’t need them in your life,” advised