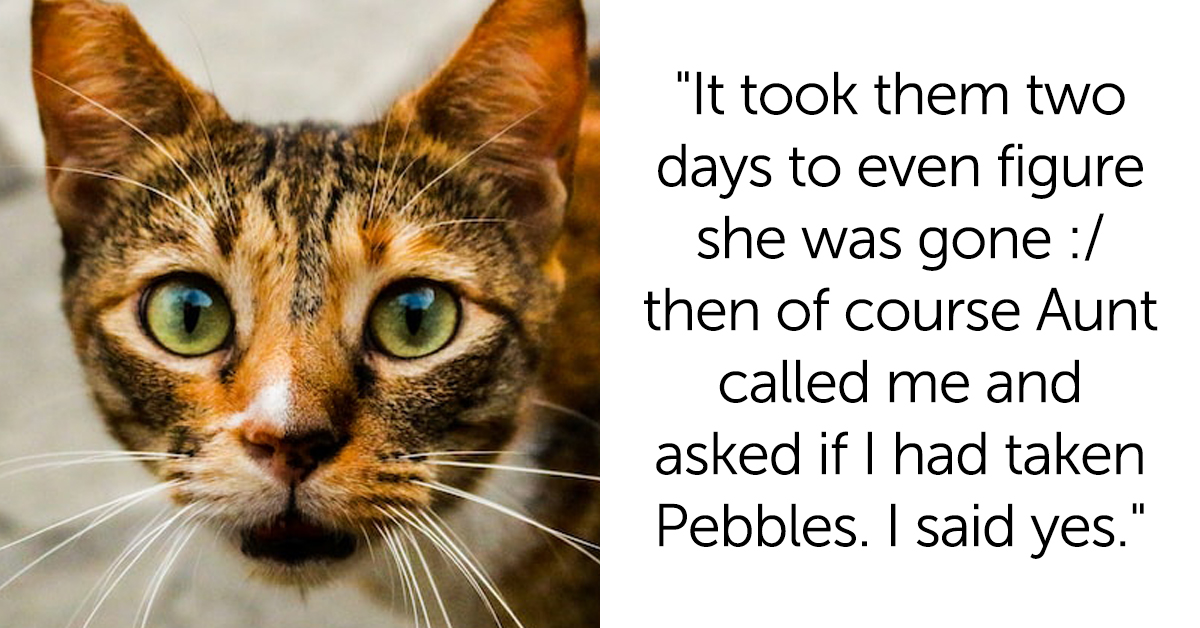 Let’s agree on something right here: the real asshole of this story is the no-pet landlord. WHY. ARE YOU. A MONSTER???

Poor u/Wild-Staple2116 had a real heartbreaker tale to share with the Reddit AITA community about losing, and getting, her cat.

OP explains that they picked up their cat when she was just a kitten — this is OP’s baby!

I got Pebbles from a humane society when she was 2 months old. I love her with my whole heart. She is now 5 years old, soon to be 6.

But a little over a year ago, OP had to re-home the cat because the apartment wouldn’t allow pets. Their grandmother took the cat in. All was well.

14 months ago I had to move to an apartment that didn’t allow pets in the contract. I had no choice but to re-home Pebbles and was heart broken. But my grandma ended up taking her for me, so it wasn’t so bad, because I could visit Pebbles any time. She was safe in a house, all indoor, and well taken care of.

OP lost their grandmother three months ago — it was heartbreaking for OP but on top of that loss, the cat was sent to an uncle’s house.

3 months ago, grandma died. And of course that was hard enough, but on TOP of that, Pebbles got grabbed without anyone consulting me and brought to my uncle and aunt’s house to live. They put her outside with their other farm cats. I drove out on my day off to see her, and she was looking scared and bedraggled. But they insisted she was fine. I went home heartbroken and angry.

OP was upset at the loss of the cat and was able to move into a better place — that was pet friendly. When they asked for the cat back, OP was told no.

Recently I was able to move into a better apartment that’s pet friendly with a roommate. I asked if I could have Pebbles back, but my aunt said no, that my cousin’s (F15 & F18) have grown attached. But frankly, oh well?? So I said fine, okay.

So during a lunch break, OP went to the farm and got their cat. Boom. Done.

Then last week during work hours, I took off on my lunch break, drove to the farm while they were at work and school, found Pebbles, put her in my car, and drove home to my new apartment.

OP’s aunt called about it a few days later; the aunt was furious but OP just hung up.

It took them two days to even figure she was gone :/ then of course Aunt called me and asked if I had taken Pebbles. I said yes. She started to yell, so I just said ‘shes MY cat and I gave her to grandma for a while, not you’ and then have Ng up.

After taking the cat to the vet, OP’s parents laid into her (???) and now OP is left to wonder if they were in the wrong here.

I think I’m legally in the clear because I took Pebbles back to the vet I took her to her whole life for a checkup, got her papers up to date, and microchipped her in my name. But my parents called me and told me they were disappointed in me, that it was immature to steal Pebbles and that the girls are apparently heartbroken.

I’m sorry my cousins are sad but I would do it again. Pebbles is MY cat and they weren’t taking care of her right. I never wanted to give her up anyway. If I’m the asshole, that’s fine.

It wasn’t long before Reddit issued a firm NTA judgment here. One person noted, “Sounds more like you rescued your cat to me..”

“NTA Pebbles is your cat and belongs with you. They weren’t even taking good care of pebbles, why would you return your cat to people who stole it and didn’t take proper care of it?” said another.