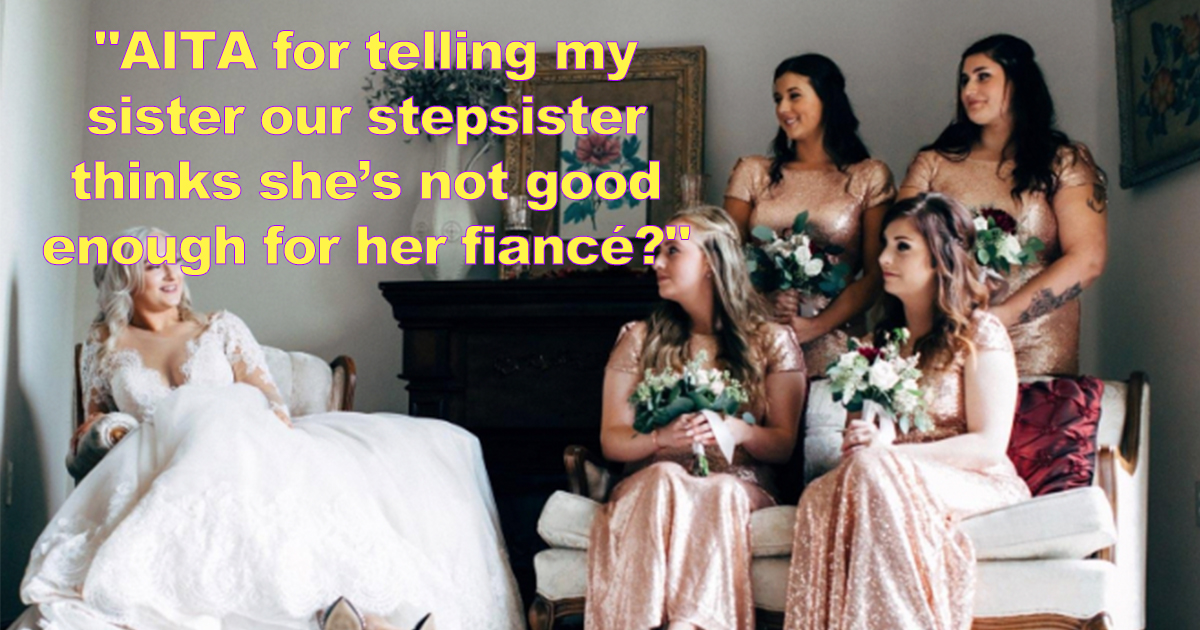 The Internet loves a good Bridezilla story, but what about Bridesmaidzillas? Every once in a while, women are a little too trusting of who they choose to stand by them at the alter, and you never know who really has your best interest in mind. “Sisters always stick together even when they fall in love” can easily be untrue, and there’s no jealousy quite equivalent to that between step-sisters.

One Redditor (u/buttah8) recently came forward after she heard her step-sisters talking mad sh*t about her biological sister and her fiance. When she decided to confront her biological sister about what was said, a family feud broke out and left OP wondering if she did the right thing. Read her post below, along with some of the top comments and let us know what you think!

OP asked the subreddit: “AITA for telling my sister our stepsister thinks she’s not good enough for her fiancé?”

They started their story off with some family history…

I have two stepsisters and a bio sister. My bio sister, Elia, is getting married soon. Our oldest stepsister, Hannah, hadn’t met Elia’s fiancé until this recent incident as she lives in Dubai and we live in London.

Right after the introduction, OP’s step-sisters began to make sly comments about Elia.

Elia’s future in-laws hosted an engagement party for them which Hannah came here for. Elia introduced her fiancé to Hannah but then had to leave as her fiancé wanted to introduce her to the other guests. After she left, Hannah kept asking us if that was really Elia’s fiancé. My other stepsister kept saying “I know”. Hannah kept cracking jokes about how Elia managed to trick him into dating her and how they didn’t match as a couple. At one point she said she would’ve thought he would want somebody more at his and his family’s level.

OP was offended for her sister, so she spoke up.

At first, I wasn’t going to say anything to Elia since I know it would just upset her and Hannah claimed to be joking but we’re all going to be bridesmaids and I know it’s going to come with some nice gifts and at least one free trip which I don’t think Hannah deserves after what she said. I told Elia and she was really upset that she started crying. Her fiancé saw and now he doesn’t want either of my stepsisters at the wedding and has uninvited them from all pre-wedding activities.

The fiance was also offended by his bride-to-be’s rotten step-sisters.

This has caused a lot of drama in my family and my stepsisters and stepdad are really angry at me. My mum told me that sometimes it’s best not to say anything, especially since I’ve made Elia feel so insecure that she’s trying to convince her fiancé that they should just have a small courthouse wedding.

Redditors agreed that OP definitely did the right thing. In this Cinderella-esque story, the step-sisters very clearly didn’t deserve the free trip and benefits of being bridesmaids.

OP was voted “Not the A-hole.” Below are some of the top comments on the post: