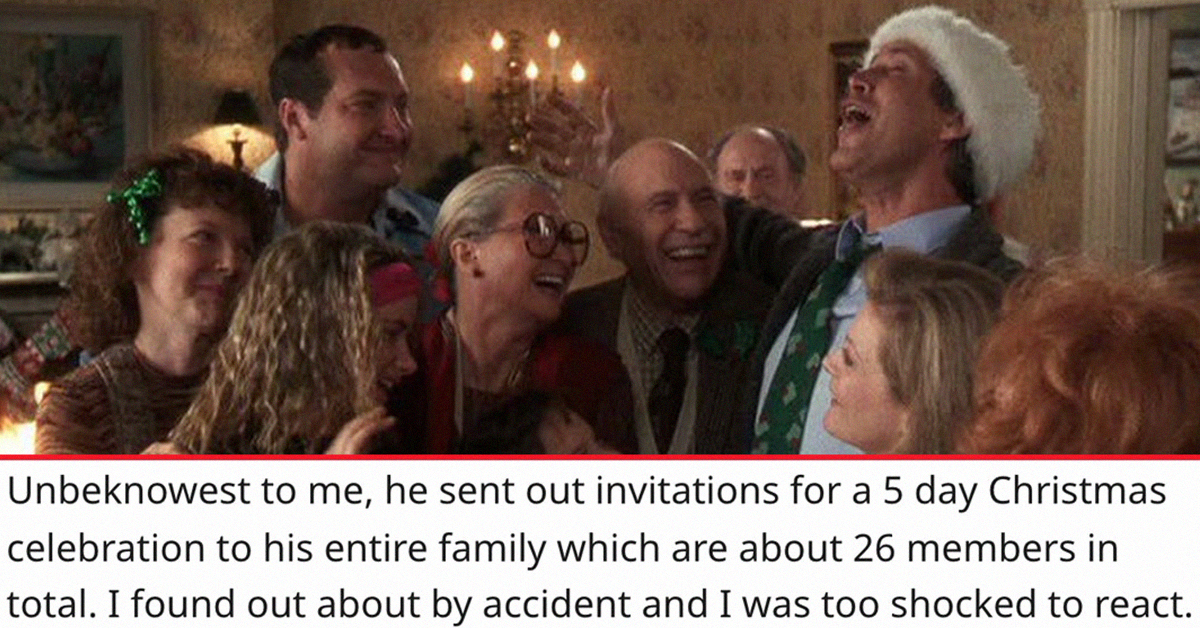 The holidays are always a little stressful, and we can always only hope that whatever aggravations we may face will be balanced out by the fun and good cheer that also (hopefully) comes with the season.

Sometimes, though, people get so banana-pants that you have to stop everything going on around you just to deal with it. One such story went viral after a wife posted it on Reddit’s “Am I the A**hole?” forum recently. (We can only hope that in the time between now and then, she’s come to her senses and filed for divorce.)

Redditor u/No355356 asked: “AITA for refusing to apologize to my husband in writing after I cancelled all his family invitations to a Christmas celebration at our house?”

This whole drama started days ago. My husband has a large family. And on every Christmas they’d gather at his father’s house. My father in law passed away a year ago and This year my husband decided as the man of the family to host Christmas at our house.

Unbeknownst to me, he sent out invitations for a 5-day Christmas celebration to his entire family which are about 26 members in total. I found out about by accident and I was too shocked to react. I confronted him on it and he said I shouldn’t be surprised and just get used to it because after his father’s death he’s now the family’s ‘head’ and all major family events will be held in our house and in his presence.

I freaked out and said no this is wrong and he should’ve talked to me first before sending out any invitations to his family knowing I have other commitments like work and taking care of the house and our son. He said we’ll manage if I took time off work but that means more workload later and it’d take away from my maternity leave. I demanded he cancel the invitations but he refused, saying, ‘over my dead body,’ then walked out.

I ended up sending a mass text to everyone who recieved an invitation explaining that we will not be hosting Christmas this year. He found out and went off on me calling my behavior outrageously appalling and said that I broke his word to his family and made him look small and with no authority. I, in a very strict tone, replied that I didn’t sign up to host a celebration and accommodate 26 people while pregnant, taking care of a toddler, and working. And I don’t care if he became the head of family after his father’s death because it means nothing to me. He took offense to that and walked out almost crying.”

u/No355356, you had us at “He invited an extra twenty-six people to our home behind my back for a 5-day Christmas extravaganza, and expected me to cut into my upcoming maternity leave to host them all and do all the cooking and cleaning while I’m six months pregnant and working full-time (but he only works part-time).” That’s certainly a mouthful, isn’t it?

BUT THAT’S NOT ALL. In all his grotesquely entitled moronosity, this sorry excuse for a husband and father continued to dial up the drama:

“He later talked about how I disrespected his father and him with what I said, and demanded a hand-written apology for cancelling the event and for being insensitive towards him and undermining his authority in front of his family. But I said no apology from me in any form, and the issue is still up—especially with my MIL giving me a stern talk about how out of line I was for disrespecting my husband’s decisions regarding the holiday celebration with family.

ETA: he planned on sitting and telling stories of his dad while I handle everything; and his family believe that as guests it [would be] rude [for me] to ask them to help [with any of the cooking, cleaning, or other hostess duties].”

If your blood is boiling even half as hot as ours is after reading this whole scenario, fear not: Redditors united to absolutely eviscerate this husband who’s so horrendous that he’s really not even a husband at this point. He’s a would-be servant-master.

Feel your blood pressure lower slightly as we share these 16 reactions of the many who took him to task. These folks, indignant on behalf of the OP, responded:

1. This really sheds a spotlight on their dynamic.

“The fact to saying she made him ‘feel small’ and with ‘no authority’ shines a light on how he sees their relationship dynamic.”

“Not to mention, a FIVE FUCKING DAY HOLIDAY FOR 26 EXTRA PEOPLE. While he leaves her to do it ALL when she’s working and pregnant and he sits on his lazy ass. OP, tell him if he wants to host Christmas celebrations, he’s got the time and spoons to do it. Or, since he didn’t bother to ask you first and just told you to do it, you could go spend Christmas with your family, right? You don’t need to ask, just tell him you’re taking the baby with you and going to stay with your family. NTA and I hate your husband, OP.

What is with these types of relationship posts lately? It almost seems like a theme.”

“NTA !! You are absolutely right, you married a man who seems to have been born in the wrong decade (century??) to be so sexist.

I almost want to advise you to tell your husband that yes, in fact, he can organise the event. But you won’t be there. And neither will your son.”

4. Why does he think he has authority?

“Undermining his…. what?? I’m curious where he thinks he gets this perceived authority from. Don’t be a doormat, OP. NTA”

5. Why did you ever get naked with this loser in the first place?

“He sent those invitations out without her knowledge for a reason. He knew she’d object. He wagered that having already sent the invitations out would bind her against her will into putting on a 5 day, 26 person extravaganza while working full time to support the family, taking care of a toddler, and being in the last trimester of pregnancy.

He’s a massive A, but I can’t help thinking this isn’t the first time he’s been an A. He was surely a patriarchal A before they even married. It always mystifies me how women are even willing to get naked with guys like this. Then they wind up trapped in a marriage with kids, and wondering where it all went wrong.”

“Also wanting to be man of the family but have his mommy defend him.”

7. There is literally nothing in this for you, what are you doing with your life?

“I have to wonder, what does OP get out of this relationship/marriage?

– she works full time, while he works part time

– aside from having to bear the physical grunt of child rearing because physiology… what does he do to help with the kids? Is he they type who calls parenting his children babysitting?

– how are the household upkeep tasks allotted? I can only imagine they fall entirely or 90% on her based on the 5-day party duties?

– is he a chef (night shifts)? Does he prepare all the meals for the family?

– is he exceptionally soft or kind to OP? I can’t imagine he is based on his reaction/complete and utter lack of respect for her as a partner regarding this fiasco…

– is he just insanely good looking/wealthy/amazing between the sheets? Is that it?

What is in it for OP? I’m interested to know—because I hear of marriages like this all the time and I don’t understand it.

Clearly I was born the wrong gender/sexual preference, because damn… I’d love to have a wife!”

“For real. But I can thing of something in writing she should give him or, more accurately, serve him with.”

“Delusional and pretty stupid, tbh. ‘I’m a man so I’m the head of this family now’??? Does he envision himself inheriting the role like a mafia boss or an ancient ruler and can make unilateral decisions? This man’s view of family is warped and his ego is irritatingly fragile.”

“[Since h]e literally wouldn’t have lifted a finger to help, nor would any of the guests. He doesn’t want a wife, he wants a slave.”

12. Think of what your kids will see.

“Leave him for the love of God. Do you want to raise your kids with this man? Have them see him disrespect you like this? A written apology FFS, you are not his bloody staff.”

“Repulsive is the perfect word for the husband and MIL.”

“There’s so much to unpack I don’t even know where to start.

First of all, a 5-day event for 26 people?? With his pregnant wife doing all the work? With no notice??

Demanding a handwritten apology from his wife?! Because she ‘disrespected his authority’?

“I got Botox a week ago and my eyebrows are well into my hairline.”

“And during FECKING COVID! Is putting his wife And unborn baby and toddler at risk of DEATH and then calls you cruel cause you said NO? Call the cops, throw him out and change the locks!”