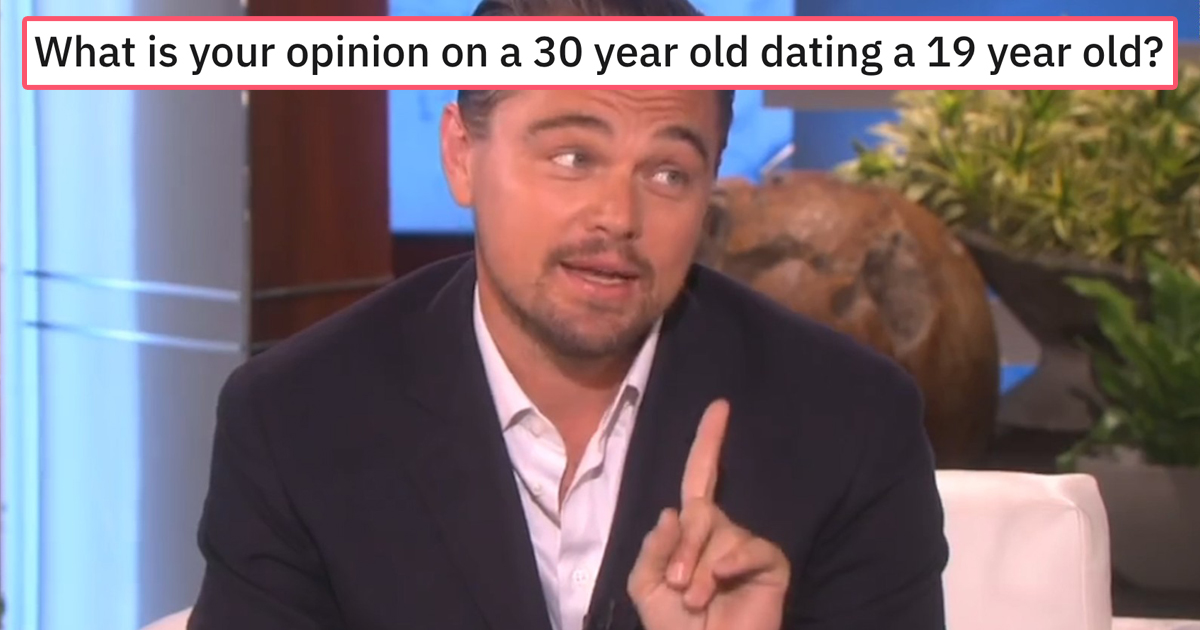 u/hazelnutmacchiato1 asked Reddit a simple question: “What is your opinion on a 30 year old dating a 19 year old?”

The responses came from both sides and I’m curious: what would you think of that kind of age-gap? Read through and let us know in the comments!

Met my ex husband when I was barely 21 and he was 29. Married for 24 years, most of them miserable for me. I guess the simple reason is that I grew up and changed, and he was already grown and stayed the same. We’ve since both moved on to much more compatible partners, but he still says, “I never should have married someone so young!”

I had a friend who married a 39 year old when she was 21 and It didn’t last a year for that reason. She still wanted to go out and have fun, he wanted to stay in and save every penny for a house. They thought they were on the same page when they were dating but she couldn’t handle the reality of being married/ missing out on her dumb years. I would say she’s still not mature enough all these years later.

I sold cellphones at a kiosk in the lobby of the department store at which he was store security. We started talking after someone broke into my kiosk and stole phones and I had to report the theft to security.

We dated for 2 years, then got engaged for another year while I tried to get my mother to accept my choice. She wanted me to settle down with a nice Korean boy, preferably a doctor or lawyer, and have a couple of kids, and here I was bringing a Polish guy, 11 years older than me, home.

When I found out I was pregnant it came down to a choice between my mother or my husband. So we eloped and got married, and last week on September 21 we celebrated our 20th anniversary with our two sons, now 19 and 18.

It’s not for everyone, and there were raised eyebrows among the people at work, even more raised eyebrows in Hubby’s family–who told him bluntly that I was only marrying him to get my citizenship (hint, it doesn’t work that way anymore).

We’ve had ups and downs just like any other couple, there have been quite a few arguments, slammed doors, and some things that we just never will see eye to eye on due to age differences, but I can’t imagine life without him, and before my mother passed away earlier this year she had made peace with my choice.

I’m not saying that a relationship between age gaps will work or won’t work, but the feelings of the persons involved should be the only things that matter. Maturity, however should be taken into consideration — all the people my age seemed so juvenile. My hubby was actually the first person I was ever able to have a serious conversation with about string theory beside my Dad.

4. It’s not as big a deal as other things

This was me. I (18m) met her (30f) when I was moving into the apt she was moving out of. I was going to school and she, into assisted housing. We were together about a year, and were talking about marriage when my parents asked me to come home, alone one weekend. Stepping away helped me to see all of the possibilities. A fiery breakup ensued. Looking back, the age separation was one of the smaller issues. This was when I learned to walk away. She was done having her adventures. I needed to have my own.

I would not. But if a close friend did, I’d advise caution. Power balances and how well they relate to each other could be issues.

I wouldn’t, but to each his own.

Yeah it’s a “this isn’t explicitly bad but can possibly be problematic” situation. And unless a specific couple is asking my opinion, it’s not my business.

I dated someone 20 when I was 25 and even that was like drastically different. Like being an adult, and paying bills, starting a career vs someone living at home and being a full time student. It made a huge difference and even though we both eventually were on the same level. There was always something unbalanced in how we started.

It’s not the age gap, it’s the mind gap.

The years between 18 and 23 are the first time most people have their first taste of freedom and responsibility. Everything is developing so fast and life feels like its flying. Then usually somewhere between 23 and 25 most people find their footing and understand their needs and wants.

That isn’t to say it cant work out between a 19 and 30 year old but successful relationships between those ages are usually outliers.

My first boyfriend was 32. I was 19. We were “together” for 3 years. He fucked me up. He did the “we’re close, but I don’t want a commitment.” And I was like “OK!” He must really like me since he’s so much older and wiser. This is what adults do. They don’t commit to each other and everyone just always keep their options open. Plus I was so young and he told me that I wasn’t ready to settle down. He said I was really smart for my age. All of his other girlfriends always went psycho and it was so nice that I was so young and wise and understands things that other girls don’t. And he said he’d pay for my belly button piercing when I lost the weight. So generous. And I was a virgin and he said he always wanted to be someone’s first. Such a fucking creep.

So when I was 15 I started dating a 25 year old. I thought I was cool AF. I had a terrible mom who thought it was totally fine. She loved him. Wanted me to marry him. I eventually broke up with him for whatever childish teenage reason.

I’m 37 now. I have two kids (17 & 19). I 100% would try very hard to not let it happen. I know now why that guy wanted to date me. He manipulated me. Controlled me. Controlled how I dressed. Verbally and emotionally abused me. Etc. no one his age put up with it. I was a vulnerable kid who was used to abuse at home and he took advantage of that. Huge age gaps like that with barely adult children are for one thing only. Control.

Personally I think it’s weird. A 19 year old is basically fresh outta highschool, barely an adult mentally. A 30 year old is a full grown adult who is way older mentally and physically.

When I was 30, I dated a woman who was 39. I still had a college-kid type of apartment and she had an adult apartment. I still couldn’t figure out what I wanted in life (two years of military and lots of grad school) and she was finishing up a doctorate to get a real job. At the time, I just felt too immature for her, so it never went anywhere.
Now she’s 76 and I’m 67, and about every day I regret that I let her go.

Even if it doesn’t work out – The older person should leave the younger person in a better place or mindset than before they got together. I dated someone 15 years older than me, and we broke up without any animosity or making eachother feel bad about anything. We are still friends too. Honestly, he helped me set a higher bar or standards as to how I want to feel and be treated by my partner. He really is a great guy, but we are in different places in our lives so it wouldn’t be compatible long term.

I’m 29 and I can’t imagine dating someone who is just starting college. And I certainly don’t meet anyone in that age range now. If someone is searching for that age, that is already a lot of red flags that are being presented. I’d definitely be on the lookout for abusive dynamics.

My hubby and I are 15 years apart. If I’d met him a few years earlier than I did I don’t think I would have appreciated the things that I eventually found very attractive about him. Not to say it couldn’t have worked out but life experience definitely makes you pick your battles with more discernment. Which makes for a better and more mature relationship IMO.