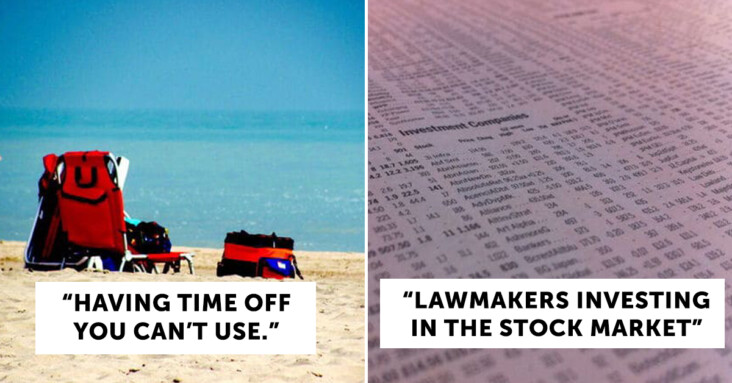 Sometimes people are too close to the problem to see it clearly. Americans know living here isn’t perfect, but it’s easy to overlook some of the glaring issues that non-Americans can see much more clearly than us, especially when so much propaganda says the United States is the best country on Earth.

A Reddit user asked “What is clearly a scam but Americans have been conditioned to believe that it is ‘normal’?” With thousands of replies, non-Americans quickly answered all of the things they see about America that aren’t normal at all. You know, things like how much we pay for healthcare, filing taxes ourselves, and of course how much violence we have and don’t think twice about.

Maybe we should hear them out before I go to jail for tax fraud.

Tipping restaurant servers so the owners of the restaurant don’t have to pay them a living wage.

Megachurches are literal scams. They make a lot of money, saying it’s for the church, then they buy 12 mansions.

Megachurches are literal scams. They make a lot of money, saying it’s for the church, then they buy 12 mansions.

Americans thinking that medical procedures are actually that expensive. Fun fact: In a normal country, you don’t pay tens of thousands of dollars.

“America is the greatest country in the world.”

Somehow, a person who works 65 hours a week at a minimum-wage job just to pay the rent “isn’t working hard enough”. At the same time, an executive whose “work” boils down to signing a few forms, making a couple of phone calls, collecting investment payouts, and playing golf is considered “a hardworking American”.

Healthcare, all the way. All those heartfelt stories on people who raised 100,000 for their neighbors surgery, and it’s great, but no one seems to question why that was necessary in the first place. The person in question has insurance and they’re still struggling to pay for this procedure?

Even worst if it’s life-threatening. People have to make GoFundMe’s, petition, all kinds of stuff. To have the basic right to not have to go broke when you see a doctor.

The idea that you need to work endless hours and never have time off.

There are plenty of countries where people work reasonable hours, have five-week summer vacations and the economies don’t fall apart.

You are not lazy if you don’t eat at your desk or while driving.

College Tuition. Being in debt for thousands of dollars as a young adult just starting their life

Getting limited days worth of annual leave per year and then being encouraged not to use it.

Millionaires/Billionaires are just like you and me, who just worked harder than everybody else.

Lawmakers allowed to invest in the stock market.

Advertising medicine. Seriously what the hell?

College text books, you pay $400 for a book because you have to have the newest version that’s rarely changed much, and the school might offer you $40 and sell it for $150 used

The price for healthcare in America. For the love of God just travel overseas and compare, like, to any country in the world… And then realize how big of a rip-off it is in America. And it’s all insurance companies fault.

Your cellphone plans. In my country, I pay €20 for unlimited calls, SMS, and data. I work in phone sales, and whenever I speak to an American, they cannot believe how cheap our plans are compared to what they pay

The pledge of allegiance was actually an advertisement to sell flags.

For the majority of wage earners, the IRS can easily determine how much you owe and tell you, or tell you what you’re owed in a refund. It’s simple.

Health insurance. Studied abroad in France for a year. When I went to the hospital for urinary retention due to an infection and had to spend the night. The only thing I had to pay for was the antibiotics they gave me to take home for a week which was about $10 for 7 pills. Ours is a joke.

Those are not the same things. In fact, the latter actually is a barrier to the former.

‘Overdraft protection,’ which actually allows the bank to charge you when you use a debit card, instead of just declining the transaction.

The push that ‘college is for everyone!’ Also, you aren’t able to default on your student loans, so banks will give them to anyone. Coincidentally, society started telling people that they should all go to college, no matter their situation, right after passing the bill that made student loans impossible to hide from.

Rent To Own products. (Rent-A-Center, Aarons, Conns, etc..) You end up paying triple or quadruple the value of the product for virtually no other benefit than you’d get if you just saved a little money and bought the product out-right.

90% of ads you see in social media. Hair fruit gummies do not help your hair.