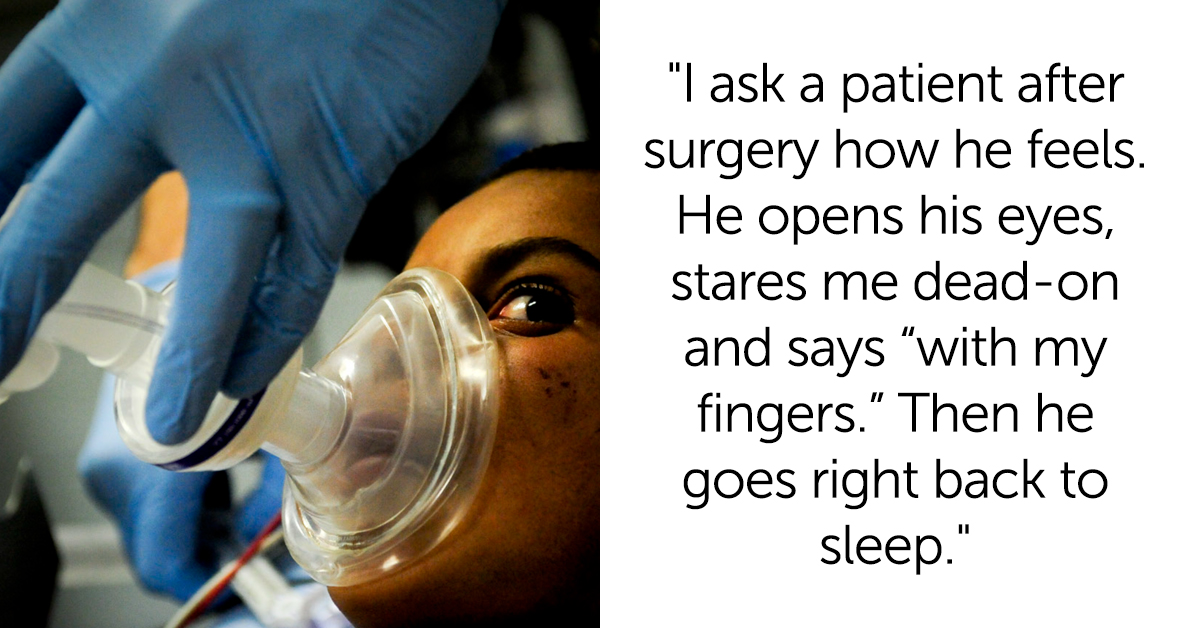 If you’ve never been put under, let me tell you that it is a trippy experience. When I had my wisdom teeth out (TWICE), I remember coming out of it insanely groggy and saying the strangest stuff. My mom, bless her, has been good enough not to remind me what I said.

A few days ago, u/DvS_Insanity wondered “Anesthesiologists of Reddit, what was something you won’t forget hearing from someone that was under?” and we gathered up the best replies. Enjoy!

I had an ovarian cyst removed a year ago and woke up from the anesthesia saying ‘hand…hand please.’ and making ‘grabby hands’ with both my hands until the nurses finally came over and held my hands for about five minutes while I just smiled and tried to go back to sleep.

I hadn’t done that in a decade. I used to do it to my dad all the time as a kid to express that I wanted to hold his hand while I slept.

My boyfriend at the time had just gotten his wisdom teeth removed, on the ride home with his mouth full of gauze, he gets a call on his cell phone. He answered it and just starts talking away, whoever it was on the other side could not possibly understand a word he was saying with all the gauze in his mouth. But man, he had a lot to talk about and they apparently didn’t hang up…. After about 5 minutes of this unintelligible phone conversation he looks at me and says “Ooo ithh a robot” and gives me the phone. I put it to my ear, and the whole time its been the Walgreens pharmacy automated notice simply stating his prescription is ready for pickup, playing on repeat. Probably for the best.

I ask a patient after surgery how he feels. He opens his eyes, stares me dead-on and says “with my fingers.” Then he goes right back to sleep.

I’m an anesthesiologist. The best story was a 40-some year old woman for appendectomy, said while I’m giving the propofol to induce anesthesia. She said “oh I don’t remember it tasting like that before” (slurred). I said “what does it taste like?” since propofol doesn’t usually elicit a taste reaction. She almost yelled “DEEEZ NUTS”, and was promptly under anesthesia thereafter. There have been other stories, but this one has the entire OR staff rolling laughing for minutes after she was under.

My aunt got rushed to the hospital for abnormal heart rate – but it wasn’t a heart attack or stroke, but her heart was going at like 200 beats per minute or whatever it was. They had to put her under so they could shock her heart back to normal. As they’re taking her under, the doctor says something like “Okay, in it goes” and she immediately quips with “That’s what she said” All the doctors and nurses busted a gut laughing and told my uncle when he got there. He just shrugged and said “That’s my wife for ya.”

One summer I was home from college and my dad needed me to pick him up after his very first colonoscopy. He was nervous so I got there early. The nurse called me back and asked me to help wake him up, as they were having some trouble. I go back and am making chit chat. “Oh dad, you’ve got those cool booties on!” He raised his head a little bit to look at them then yelled, “Booty call!”

One time I, a male biology student in his early 20’s with a stuck kidney stone, was being put under for surgery: Just as the anesthesiologist was pushing meds and telling me to count back from 100, I looked up at him in a drugged but focused gaze and said “You’re so pretty.. you could be in movies” then blackness.

Anesthesiologist was like a grizzled 70 year old hunched back looking guy with a lopsided grimace and more ear-hair than head-hair (great doc though).

Very last thing I remember hearing was the OR nurses cracking up laughing.

It was a smallish medical community and I knew some of the people there so as a joke somebody snuck his headshot into my chart. I like to think it was him gunning for a second career though!

I woke up from gallbladder surgery confused as to why my mom wasn’t there (I was 18 and looking for my mom). The nurse informed me I had cussed out my entire family and they sent them home and put me on a no visitor list, only for me to wakeup at 2am with no memory making them call my mom back. Another time I woke up and made horrifically inappropriate jokes. I told a nurse she was pissing me off because I didn’t like the automatic blood pressure cuff. Another I refused to listen to followup orders until I had a chicken sandwich (my negotiations were not met). I’m a real treat after anesthesia but I get a lot of this done at the office my mom works at so she can warn them lol.

I have no recollection of this but according to my mom, when she met me in the recovery room after wisdom tooth extraction I was very eager to tell her something but my mouth was full of gauze. So they gave me a pen and I wrote something on the surgical bib. Hours later, when I was back in reality she asked me “what was with the meow meows, my son?” I had no idea what she was talking about so she showed me the bib. It said

I had a guy (nefarious character, heavy drug use history) who got a bunch of ketamine (probably too much) in recovery from one of the other docs to help with severe pain after his abscess drainage. I was asked to check on him in an hour as the other doc had left for the evening. Went over and saw him in the K hole drooling on himself but otherwise fine, so I left and came back an hour later.

First thing he says to me is “why did you do that to me?”. I asked him what he meant and he said, “you don’t understand, I lived another man’s life in there!” I apologized and asked him “how long do you think you were in there?”. For reference it had been something like an hour and a half or two hours since his trip began.

My personal story. When I had my wisdom teeth out, I kept holding a fake camera up to my face saying “you’re beautiful” and making clicking noises while I was under. I’m a professional photographer and my dental surgeon ended up booking a session with me a year later.

Kind of on topic; when my mom woke up after having a stroke, the doctor asked if she recognized the people in the room. She got my sisters name right, called me my brothers name, and smiled real big at my step dad and called him asshole.

Patient here. Came out of anesthesia and heard gotye’s “somebody that I used to know” playing in the recovery room. I asked my SO why they were playing it at like 10x the normal speed and the nurse just goes “ok so she’s not ready to go home yet” lol

I took my mom for her surgery on her right shoulder and her anesthesiologist was this very dignified, solemn older Persian gentleman. My mom told him, “Just so you know, I wrote directions on myself to make sure you get it right!” (She was joking around, but she actually does this… old battleaxe nurse habits die hard.)

He looked her straight in the eye and said deadpan, “Great. So let’s get started on your left knee.”

Totally got her. It was great.

I was told after surgery I said I love dogs and I want to eat the Taliban.

I once came out of anesthesia after an endoscopy, which can cause you to burp pretty much the whole day, and my fiancée asked “How’re you doing?” I misheard and answered as though she said “What are you doing?”

I also started crying on the way home because I wanted one egg. I never crave eggs.

I had a double jaw surgery scheduled for April 21, 2016. The procedure was fine (I remember waking up halfway through it and getting more anesthesia). After the surgery ended, they put me into the hospital room to let the drugs wear off of me. I don’t remember much of this time so this comes from my mom, but she was sitting in the room with me, watching the news on the TV. I wake up and I’m quiet for a little bit before I start sobbing. My mom thinks it’s because my mouth hurts. My mouth is wired shut so I actively can’t correct her with words, and have to try and write out (on paper) what I’m crying about. The news was broadcasting about Prince’s death, and I was hysterical over the fact that I apparently killed Prince and that I had to turn myself in.

This guy I was dating he asked me to take him to get his wisdom teeth removed. He told me that anesthesia doesn’t effect him a lot and we were supposed to go on a road trip the next day.

So anyway he gets wheeled out of the dentist by an old nurse. I’m behind the driver seat and I see him smacking his lips looking up at the sky. She opens my car door and he said “I love her, I love her”.

He then proceeded to ask me to marry him several times. He tried to pull out his gauze and I told him stop and he said “man this bitch is bossy”.

Then he wanted a milkshake. I would suggest a place and he would scream NOOOOOO. Finally we agree on a place and he tells me he’ll give me directions. I drive for 15 minutes before I ask him what we’re doing and he said he has no idea.

We’re in the drive through and he says “I have something for you”. I swear I thought he had bought me a ring the way he had been proposing for last hour. It was his newly extracted teeth. “They let me keep them, I want you to have them” He lived on base at the time and was yelling at the gate while they checked his ID for them to “Hurrry UPPP”.

I finally get him to his room, in bed. He’s happily eating his milk shake with a spoon. His mouth was a mess of blood and milk shake. He asked me for a kiss. I gave him a peck.

My mom woke up from dental surgery and when we were leaving the surgeon’s office, he gave her a “goodie bag” with floss and a toothbrush and stuff, and the whole way home she kept asking if she could eat the candy that the dentist gave her. Every time I told her there was no candy, she looked so heartbroken, like a little kid when their goldfish dies or something

Then we stopped at CVS on the way home and she wandered off. I found her in the candy aisle holding a giant bag of fun sized candy and when I told her to put it back on the shelf she dropped it on the floor and galloped away laughing at me