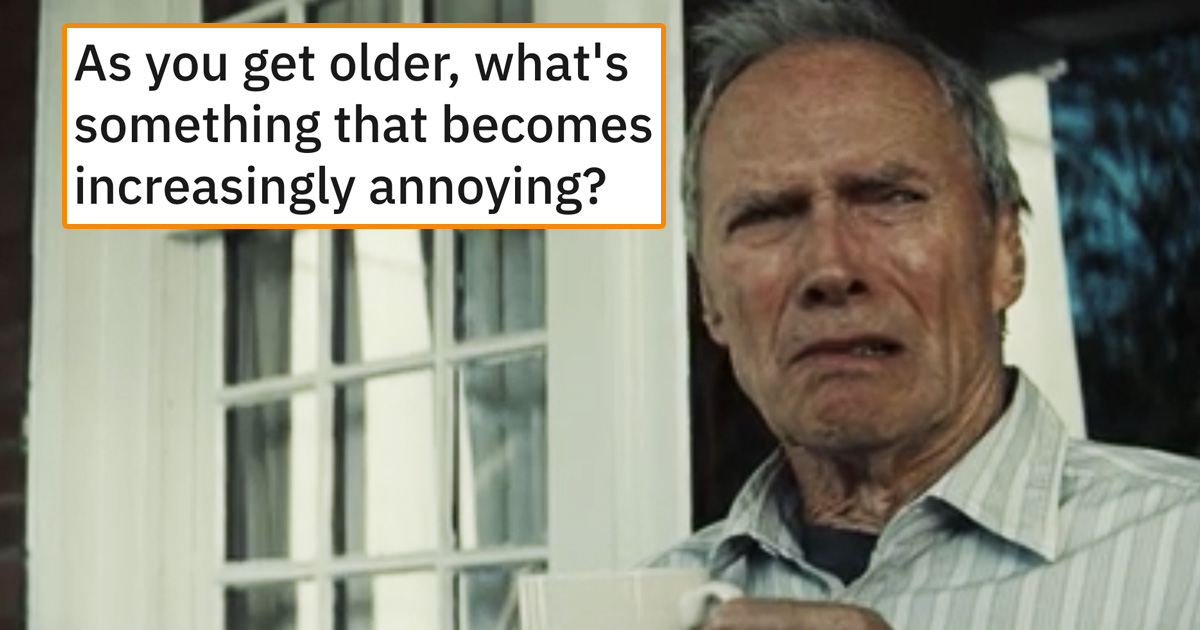 There’s a saying that as we grow older, we stop caring as much about the minute things. We stop caring about how people perceive us or meeting expectations set by others. Another thing that happens when we get older, is that our patience level hits new lows. Some of the things we used to enjoy or tolerate become downright annoying.

In a recent Reddit thread, users are sharing their own experiences with this by answering the question: “As you get older, what’s something that becomes increasingly annoying?”

These annoyances can be caused by other people or by our own bodies. From big things to tiny issues, people are aging and starting to hate clutter, loud spaces, bad manners, and so much more.

Here are 20 answers, maybe you can relate.

Being tired all the time.

This drives me crazy! My husband and I work for a guy who never stops lying. He says he was a super secret marine or some shit who was there when Osama bin laden was killed. He knows Putin, played chess with him. Used to hunt down Japanese Mafia. Had a hit on him from Al Qaeda because he was such a good sniper. Dude literally just repeats movie plots. If you’ve been somewhere, he’s been there killing monkeys with a samurai sword or some sh-t.

Clutter! Stuff! It didn’t bother me that much when I was younger, but it’s definitely something that’s gotten increasingly on my nerves as I passed into my 30s. Definitely exacerbated by the grandmother-in-law who will not stop giving us stuff, no matter how often we ask her to.

Loud, dark restaurants — can’t hear the server or my friends and can’t read the menu without my phone flashlight.

It is the actual worst.

My inability to fall asleep.

My inability to stay asleep without having to get up and go to the bathroom every three hours.

Why is it so hard to just be nice?

Honestly just drama. As a kid, I didn’t notice it. As a teen, it was all around me and I was half involved. As an adult, I’m so f–king sick and tired of hearing stupid drama.

Hair coming out of my ear. I mean what the f–k?

There’s either too much or too little.

I floss my goddamn teeth! Why did I have five goddamn cavities last time!

Working non-stop. When do adults get summer break? It’s been 16 years.

Remembering super obvious shit. I just spent a few solid minutes trying to recall my cousin’s name. And it wasnt until I remembered that we called her Babble-On as a kid, because she never shut up, that I remembered her name, Avalon. I then realized she’s 25 now and freaked out because I swear she was 15 like a year ago.

Lost a whole decade with that train of thought.

Oh my god and it’s not even just the ones facing at you. I had to drive home with my head cocked to the left the other night because the jerk behind me was blinding me with his LED headlights! They were so bright they were overpowering my own headlights. Cocking my head just right was the only way to keep from being totally blind without adjusting all my mirrors so my retinas weren’t lasered out.

Not kids, playing or quick shout. But a scream. School down road from me is so loud I cannot enjoy my meals on my balcony.

People looking at their phone while driving, not really listening to the person they’re talking to, blocking the grocery aisle with their cart, leaving messes for someone else to clean up, taking good friends or family for granted, contradicting themselves with cognitive dissonance, screwing everyone behind them when the left turn is green, etc. You’re not the only person trying to live your life today

Discovering new aches and pains when you get up in the morning.