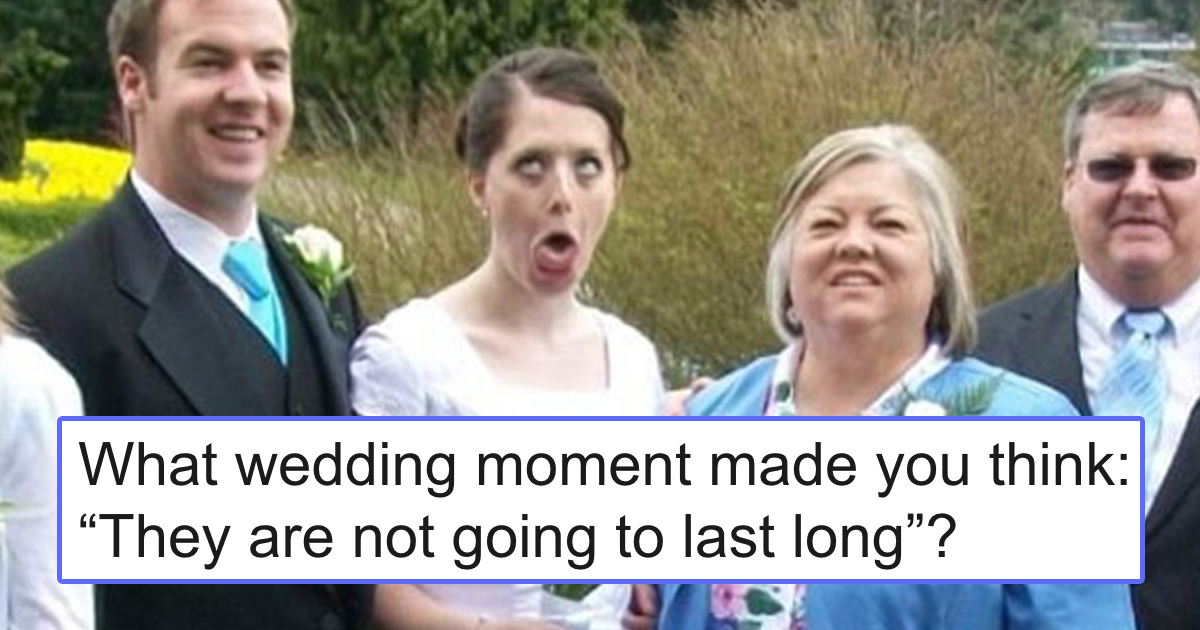 u/Olya_roo made a post on r/AskReddit asking people to spill the tea on which wedding moment made them realize the couple was headed for Splitsville. And boy did it take off — over 24,000 comments!

Check out some of the top ones below.

Prior to my wedding I’d asked my husband to practice dancing with me because I’m uncoordinated, due to a disability. He blew me off and said we’d be fine. As we were dancing, he spoke in my ear, not even quietly. “What are you doing? What’s wrong with you? You’re embarrassing me!!” We lasted 2 years. Leaving was the best decision I ever made.

I was at a wedding when a phone went off during the ceremony.

In the middle of exchanging vows.

It was the grooms.

He took the call.

They are divorced now.

Just before the wedding started my mother turned to me and said “You are making the biggest mistake of your life, if we get in the car and leave now I will never say another word”

4. Groom slept with someone

Groom slept with another groomsman the night before he married his wife. Wanted to go to a gay bar at the bachelor party. Came out two years into the marriage. Denial ain’t just a river in Egypt.

The groom took the stupid cake thing to an extreme. The bride had given him his bite, and mushed a little on his chin or nose. He then took a piece and MASHED it into her face so hard that I was expecting her to end up with a bloody nose. Cake and frosting got up her nose, in her eyes, down the front of her dress, etc.

The bride had to go get cleaned up, had her makeup re-done, and was ugly-crying within an hour of saying, “I do.” He didn’t give a damn.

6. Alone on the honeymoon

When she went alone on her honeymoon, because she booked a trip to the caribbean despite her newlywed husband having a severe sun allergy.

Don’t know what happened… Sat down with bride and groom, filling out the contract. Got the deposit. He stood up, said forget it, and walked out. 2 months later I get told the wedding is off, 3 months later she calls to rebook, different groom. Day of the wedding I am at the church… Got the final payment the week before… No one shows… No one, just me and the DJ.

When the maid of honor professed her love for my brother during her toast at my brother’s wedding… and her husband walked up to the head table, picked her up and carried her away before she could embarrass him further. They lasted about 3 months after that. My brother and his wife on the other hand are still happily married 20 years later.

When the groom went in for the kiss after their vows and the bride presented her cheek instead. They divorced less than a year later after it was discovered she had been cheating on him pretty much their entire relationship.

Two friends of mine got married, and when they gave their vows, the guy started laughing at the part about being faithful. Oops.

Bride disappears right after dinner for about an hour. After she returned, groom’s father comes up and asks for the mic. Proceeds to announce to the entire place that his son’s new bride was just upstairs schtupping her ex boyfriend, and that the marriage is over.

I was maid of honour. Me, best man and the couple went into a separate little room to do the signing stuff. Bride excused herself to go the bathroom and the groom started making pretty mean remarks about her cooking (sth she’s passionate about) to the officiary. She came back, heard they were talking about cooking family meals together and gave him the warmest smile, thinking he had praised her. He scoffed awkwardly and changed the topic. That always stuck with me. He wasn’t laughing WITH her but AT her, behind her back.

A fun light-hearted dance with the groom followed by a close and slow dance with her male best friend.

Lasted 18 months and now she’s living with the “friend”.

Portuguese wedding. Fist fight broke out at the head table during the reception. Between two groomsmen. They were arguing about which of them had slept with the bride first. Groom was oblivious.

He came home from work early one day two years later and caught her in bed with another man. Surprised it took that long.

Midnight buffet was amazing though.

The part of the vows where you pledge monogamy? The audience laughed

When they disappeared for half an hour during the reception. They were both “saving themselves for marriage” and were desperate to bone down. Which is a fine thing to want. But it turns out that was more or less the main reason they got married. They made it almost a year.

She told me two days before that she found her fiancé annoying and that she didn’t like him and that he was AWFUL in bed.

She was visibly, endlessly uncomfortable at the rehearsal wedding/dinner combo.

Then she sobbed the ENTIRE morning, day-of. She ended up not getting any makeup done cause she wouldn’t stop scream-sobbing and refused to get dressed, stalling the wedding ~35 minutes.

She then said 45 minutes of “vows” that she had prepared (9 pages of things like inappropriate vows to friends and family, his parents and sisters, none of them her husband), and then ALMOST didn’t say “I do”. Managed to get a, “uh, yeah, okay, yeah I do” out of her almost a full 60 seconds after she was supposed to say anything.

I could go on for HOURS, but it was the most painful and awkward wedding I’ve ever been to. I’ve got my money on 10 months. We’re 1 month in.

The groom had a “best woman” instead of a best man. Nothing wrong with that, but her toast left the whole room in awkward silence because she was clearly in love with him.

After one ceremony I saw the groom slap the butt of one of the bridesmaids in the hallway. She laughed and with a big smile said, “Oh Jeremy, you’ll never change!”