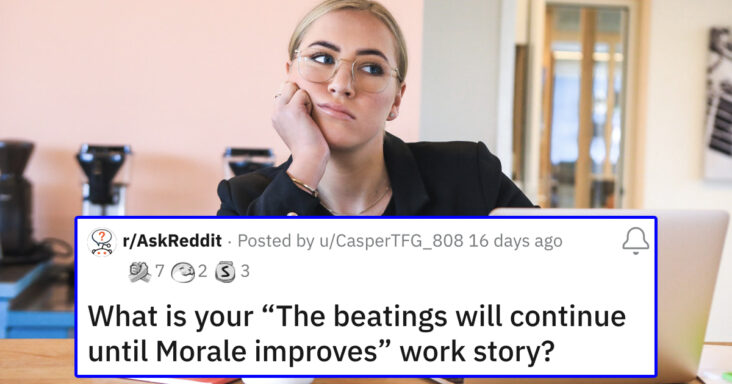 The Great Resignation saw countless Americans stepping away from their jobs and finding better ones, though it does seem like companies are starting to worry their way out of offers. Inflation is rising and a recession seems imminent, but that hasn’t stopped people from trying to find a better situation.

Better than the stories u/CasperTFG_808 received when he asked “What is your ‘The beatings will continue until Morale improves’ work story?”

“We were all swamped with more work than we could do and there were often mandatory meetings would happen often that were to discuss why we were behind and what they could do. One guy actually spoke up and said, ‘STOP HAVING SO MANY MEETINGS AND LET US WORK, EVERY MINUTE OF THIS MEETING IS PUTTING ME FURTHER BEHIND!’ They literally called another meeting 30 minutes later to discuss how the last meeting was not a positive experience for them.”

“My manager asked what to do about low morale and high turnover. I know he’s a hardass so I offer something simple, ‘Well there are only three chairs for the given 15–25 of us on an average day, how about we get some more?’ His response was, verbatim, ‘DONT YOU START THIS FIGHT WITH ME BECAUSE YOU ARE NOT GOING TO WIN.'”

“Each of us had to go into a room with the COO and a general manager and watch a Youtube motivational video with them. It was one of those narrated videos where it’s some person drawing cartoons and text on a whiteboard. Anyway, the theme of the video was that you should be following your passion and pay should be secondary and not a motivation. After the video they then asked us, individually, ‘Would you like to ask us to lower your pay?’ As if that was the takeaway we should be getting from the video. It was totally absurd.”

“I worked at a place where the owner had cameras installed all over. Ostensibly, it was so that he could keep an eye out for shoplifters. The thing is, those cameras were installed EVERYWHERE, including the breakroom, and the only two places where there weren’t any cameras were the bathrooms and the boiler room. So naturally, people would usually go for their lunch breaks outside, or if it rained, they’d go to the boiler room to grab a bite and have some semblance of privacy. I seldom ate lunch, so I usually decided to just hang out in the toilet cubicle, just scrolling on my phone. A few days later, there I am on my break, in the stall, just standing and leaning on the partition and scrolling through Reddit on my phone, when I get a call from my boss. He said that he can see me standing there and demanded to know why I hadn’t moved for 25 minutes.”

“I was flabbergasted, to say the least. It turns out, that unmitigated asshole installed a camera IN THE BATHROOM over the weekend and the angle was such that you could see partway into the stall. I was livid and told him so, but his rationale was that he was concerned that I was doing drugs in there. Needless to say, I handed in my notice the very next day.”

“I once worked at a company where morale was very low due to extreme micromanagement, low pay, and having to provide tech support for a product that frankly sucked. So, they called us into a series of meetings to ‘discuss’ the issue. The guy leading the meeting asked us as soon as we sat down, ‘Who here is happy in their job?’ And like one or two people raised their hands. He then said, ‘Well in this economy, you’re lucky to have a job at all. Meeting over.’ And then he left.”

“If you did not display an enthused reaction to the ‘Mandatory Fun’ activities, you were put on the shit list.”

7. Tired of his yacht

“I worked at a fintech company in the UK in the ’90s. It grew to around 1,000 people, building towards IPO. HR decided we needed a company magazine to boost morale and give us a sense of community. The first issue landed and the cover story was, perhaps predictably, a profile of the new CEO. He was a decent guy who had worked his way through a few roles in the company. He was fairly well-liked up until this point, except for the angle they decided to focus on to show us his human side, which was how he was getting tired of his current 55-foot yacht and was hoping that the efforts of we, his minions, would reward him with enough bonus to be able to upgrade to a 76-foot model in time for summer. Reader, I do not believe it had the desired effect.”

“I worked at a brewpub that touted an employee deal of one dollar beers and 50% off food following a shift. The owner also bragged that it cost them 10 cents to make a beer. After a shift, some staff ordered a pitcher, which is around four beers, and the bartender charged them the requisite four dollars per employee deal. The owner watched the security footage of the pitcher at the table, compared it with the four-dollar charge, threw a massive fucking tantrum, and took away the beer and food deal for employees altogether. The bartender lost a bunch of prime shifts as well. Math is hard.”

“We had to take a survey and one question was: ‘Aside from getting a pay increase, what would make you feel more appreciated in your current position?’ We all wrote down things like birthdays off with pay, less overtime, allowing coffee/soft drinks while we are working, and increase breaks from 10 minutes to 15 minutes. We all handed in the surveys. They did not implement a single suggestion.”

“They sent a survey asking what our perceptions about the workplace were. Voicing some issues with some areas was 100% going to get you in trouble so I complained that the survey was not anonymous, and didn’t complete most of it. Some days later, I was personally contacted by three people who wanted to find out what was wrong. They completely missed the whole point.”

“We had an employee morale survey and ‘I am paid enough’ was one question. CEO eliminated the cost of living/annual raises. That question was removed from the employee survey.”

“Our new manager scheduled an ‘ice cream social’ one day for thirty minutes. A few of us walked in about five minutes after it started because we had to finish up a task, and the room was completely fucking silent. Everyone got one small scoop of ice cream. Once we (the slightly late people) got our ice cream and sat down, the manager announced to the room, ‘If you’ve finished your ice cream, you need to go to the floor and get back to work.’ It’s a fucking factory. The work will still be there and it’s not like we’ve got customers waiting on us. It was the most depressing and half-assed mandatory fun I’ve ever experienced at a job.”

“They would update the dress code every time anyone came in wearing anything the boss didn’t like, even if it was entirely appropriate for work. Bill got a new tie for Father’s Day and it has bright green stripes? We got an all-staff email the next day banning ‘distracting colors.’ There were only like 15 employees all working in one small building, too, so it was obvious who the boss was targeting each time.”

“A hardware malfunction shut down our data system for three days, resulting in over half a year of mandatory overtime to make up the lost production time. When announcing this via email, the office supervisor used a quote by Ferdinand Foch. He was a French general in the first World War, famous for advocating the throwing of waves of men at barbed wire and machine guns because it’ll totally work this time. This was meant to be an inspirational quote.”

“My sister worked at a fine dining waitress job years ago. Her boss liked to keep his staff ‘on their toes’ to ensure no laziness or poor performance and said boss decided it was a great idea to test the waitresses. His wise idea was to have the chef pick a person waiting during each shift and subtly or openly screw up their orders. Wrong items, cold items, added stuff that was asked to be removed, etc. This went on for several days, one by one each person on the wait staff had a night of chaos and reduced tips/complaints. Not even a week later, half the kitchen and wait staff had left and all the complaints added up, enough that the place closed within six months.”

“‘We’re going to lock the knowledge base until productivity goes up. You should be able to do your job without it.’ SPOILER: We couldn’t.”

“I had a friend whose supervisor got upset because she heard people chatting while getting their lunches out of the fridge and making coffee. Her solution? Lock the break room at 8 a.m. (so you needed to come early if you want a cup of coffee), and lock the bathroom so people would need to approach her and ask for the key every time they needed to use the facilities. Imagine being in your 30s or 40s and having to ask permission to use the bathroom.”

“I worked at a Hobby Lobby and got moved from part-time to full-time and put in a department. I did a great job, so they moved me to a bigger department. I still did pretty good, so they moved me to the BIGGEST department, where I was meant to work with two other employees. For the first few weeks, we did pretty well! Then one of them got pulled to do seasonal work, and the other one started calling out on truck day. I was consistently getting in trouble for being behind. I was tired from doing the work of three people. My manager would constantly ask me why I was so slow. He constantly said, ‘You used to work so hard. What happened?’ It was somehow my fault that I was not capable of carrying a department meant to be run by three people. I ended up quitting for my mental health.”

“‘It would be too much work for you to train new staff, so you’ll just have to do your job plus most of someone else’s job while we dick around for months on a unicorn hunt looking for some magic candidate who perfectly fits into the open position with zero training. Sincerely, the management.'”

“At the credit union I worked at, us tellers complained that our incentive pay wasn’t fair compared to the other departments. The lending and wealth departments got their incentive pay just by doing their jobs. The tellers had to compete with each other so ONE of us would get incentive pay, and the requirements were difficult and out of our control. So we complained and suggested a more fair program. The GM decided that if we were going to complain, then NO ONE gets incentive pay. Everyone was pissed!”