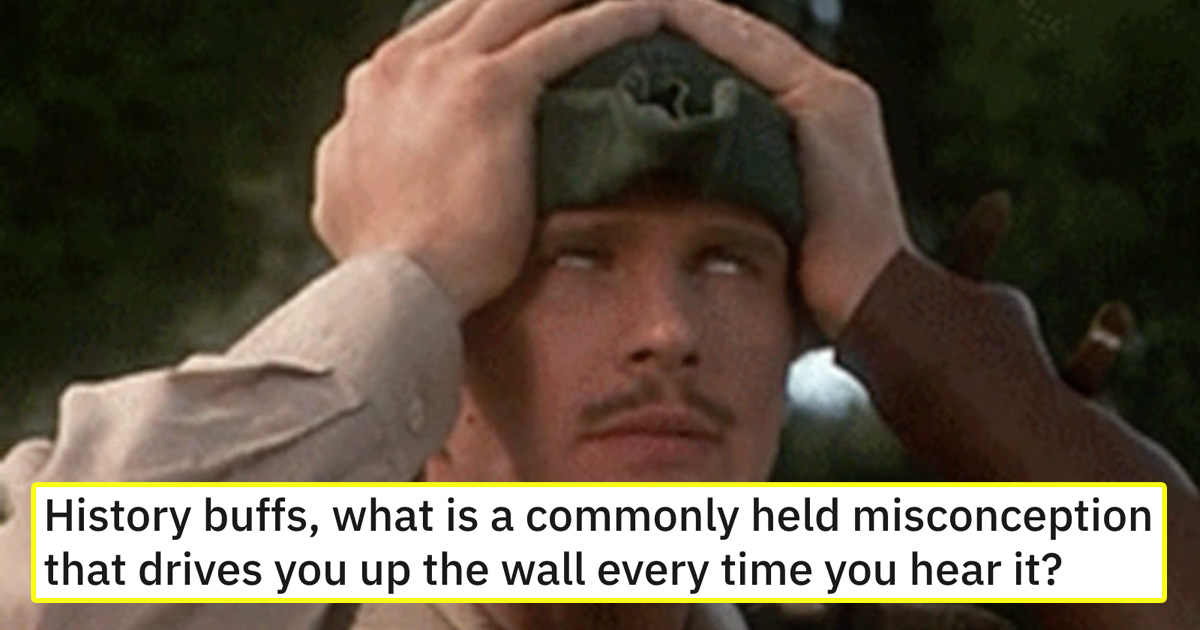 There’s a lot of history that a lot of people get wrong. Over the years, legends, propaganda, and dramatizations can muddy the truth and pretty soon, no one knows what actually happened. Still, it’s important to set the record straight. Redditor u/throwaway000689 asked r/AskReddit:

“History buffs, what is a commonly held misconception that drives you up the wall every time you hear it?”

And everyone in the comments is dropping truth bombs. (At least we think so, we haven’t verified these, so take them with a grain of salt.)

1. “Most Americans supported the Revolution”

Only around 40% of colonists supported the American Revolution. Another 40% was indifferent, and about 20% sided with the British. Most Americans think that it was the vast majority who wanted Independence. –placeholderNull

According to several sources (e.g., eyewitness accounts) his warning was likely “the Regulars are coming out” or some variation of that and probably not loud enough to wake up a village (as I’ve seen in some media renditions). –Animalion

I have had way too many of my university students tell me that Lincoln owned slaves. –FeelFreeToIgnoreThis

People seem to think peasants only ate bread and potatoes with no seasoning. In reality, while salt was indeed a luxury they often couldn’t afford, they had access to plenty of herbs to flavor their food. They also had access to things like fish and other meats, so they weren’t just eating bread, though it was an important staple of their diet.

If you’re interested in how a bunch of civilizations ate throughout history, check out Tasting History on YouTube. It’s a great source of historical information and entertainment. –Balrog229

That if you were a Peasant you could marry who ever you wanted for love and if you were a noble, royal or the like you could only marry for power During the Medieval period.

Higher class people could and did (though it wasn’t common) marry for love and most of the time Peasant marriages were arranged for the same reason as noble ones were, to link two families together, you very rarely got to marry who you liked it was usually who your parents liked.

Also Prima nocta has, as far as I know was never actually being recorded as a thing. –Nugo520

That Neanderthals were monosyllabic brutes. There’s no evidence of that whatsoever. Their brains were bigger than ours and casts of the inside of their skulls show that they had all the same structures our brains had. Their tool making was comparable to any Homo sapiens’ took making (at least before the Great Leap Forward) and they lived in communities just like we did.

We also regularly mated with them and had kids, which I really don’t think we would if they were little more than quasi-gorillas. –PhillipLlerenas

Roman gladiator fights usually weren’t just pointless, bloody, fights to the death for scumbag convicts. The gladiators themselves were very highly trained celebrities who were very well looked after. It was entertainment done for show, much like WWE or similar today. –_spookyvision_

People didn’t die at 30-40. The high infant mortality rate skews the average. If you could survive into your teen years you had a pretty good chance of living into your senior years. Obviously there are a lot of factors to consider(eg class, gender, occupation, where you lived, etc.) –crazynekosama

That Rosa Parks was just some nice old lady who wouldn’t give up a bus seat.

She was a political activist who meticulously planned that specific instance of civil protest. –Bignasty197

Knights weren’t exactly chivalrous. It was a concept designed to make them appear magnanimous, and to justify their brutality among the common folk of their enemies when they weren’t at war.

Knights could even pay their respective kings to chicken out of fighting in a war if they were summoned to do so, which many did to keep on pillaging hovels full of bumpkins because it was easy sport.

In short, a lot of Knights were rich, murderous bullies with too much free time on their hands. –Imfinejusthomeless

The belief that Anastasia did not die with the rest of her family. –Aware_Masterpiece_23

Marie Antoinette’s famous “let them eat cake” or “let them eat brioche”. She literally never said it. She was 9 at the time and it was entirely made up. –hfhmghs

Just recently learned that Napolean being short was a slam campaign. And Hitler wasnt that short. About 5’9. –escapefromnarcatraz

14. “The Vomitorium was named after vomit”

The myth about the Vomitorium

The story goes that Roman nobility would go there to eat so much till they puked and would then continue eating.

It was just the name for the Colosseum entrance. –Th3_Accountant

That Jewish people and other victims of the Holocaust went willingly to their death and no one fought back. While it’s true that a lot of victims did not believe the genocide was occurring and they were simply being relocated (Nazis/Hitler were very persuasive and no one could imagine a genocide), plenty fought back. There were resistance groups all over the place as well as people fighting from their homes when they were being taken for deportation. Guns were used, makeshift bombs, stolen bombs, etc. Not everyone was going to go to the concentration camps/death camps/detention centres without a fight. –PrxnceZuko

16. “The sotrming of the Bastille freed hundreds of prisoners”

French revolution storming of the Bastille freeing hundreds of political prisoners. When in actual fact there were only 7 prisoners. (4 cheques forgers, a lunatic, a sexual deviant and a man who tried to assassinate King Louis XV 30 years ago). –Age-Zealousideal

That AD means after death. –Evincer1968

That the American Revolution was fought between British soldiers fighting in lines and American colonists using all sorts of cover and walls and strategy that the British were too dumb to figure out. While there are instances of that, there are also instances of British troops doing the same thing, and of many (many) “set piece battles” where both sides would have fought in a “european” manner. –youarelookingatthis

That people from the past were just less intelligent than modern people. Fact is, humans from even 15,000 years ago were just as intelligent as modern humans (intelligence being the ability to learn and apply knowledge). They just had different things to worry about and had not discovered everything that we know today.

The whole of modern civilization is built on discovers made thousands or tens of thousands of years ago. Our ancestors, starting with nothing but stone tools and basic survival skills, created agriculture, writing, mathematics, standardized language, the wheel, metallurgy, ship building, architecture, trade routes spanning all of afro-eurasia, currency, banking, cross breeding of animals and plants to create better strains, the list goes on.

If I plucked a human baby from thousands of years ago, properly immunized it to modern diseases, and raised it as any other child today, you would be unable to tell the difference between them or any other child.

Fact is the only difference between us and our ancient ancestors is the discoveries, philosophies, technology and effort performed, created and understood by the hundreds of generations between us.

Our ancient ancestors were simply smart in different ways because we only really learn what we have to. Ancient Polynesians literally memorized the night sky for navigating the innumerable islands of the Indo-Pacific and Oceania, Norse people’s built ships capable of sailing from Europe to America using only hand tools, wood, linen, nails and rope. Ancient east Asian cultures built massive temples out of wood using only precisely crafted wood joints and no nails. Rome built, well, Rome, with hand tools and hand calculated math. Same can be said of the wonders of Egypt, India and mesopotamia.

Then there is Göbekli Tepe, an amazing structure of precisely placed monoliths, engraved walls and cobblestone paths built nearly 12,000 years ago. Which is nearly 6000 years prior to our earliest records of advanced civilizations.

We stand on the backs of thousands of years of knowledge painstakingly collected and handed down for millennia to us who have taken it and created wonders our ancestors would attribute to gods.

Yet we ignore the gargantuan effort that our long dead kin have contributed to our success and even view them with distain. Calling them savages, ignorant and fools. Truly we are the ungrateful child looking down on the gracious teacher that our ancestors were.

We are the summation of all of humanity, just another step in a long history of advancement, not a separate holy being above it or separate from it. –Ralife55

21. “WWI trench warfare was two sides string at each other”

WW1 trench combat was nothing like how most people think about it. The common misconception is that people stared at each other with machine guns until some idiot general forced his soldiers to run into machine gun fire and they all got brutally mowed down while the enemy cracked open a beer.

The reality is much, much more complex. Artillery did an excellent job of suppressing machine guns and clearing barbed wire, forcing defending troops to hunker in deep shelters while the attacking infantry were free to advance. As a result, the attackers generally had a pretty substantial advantage in the war, and casualty ratios support this- across the war, attackers almost always had equal or lower casualties than defenders.

Once you’ve taken the enemy’s first line of trenches(and they have much more than one line), because of your own artillery, it is now almost impossible to reinforce and consolidate your hard-earned territory. Your own artillery has blown apart the terrain between the trenches enough that it’s very, very difficult to get supplies or men across, and it generally doesn’t have the range to suppress enemy counterattacks further back(because if it did, then it’d be open to counterbattery fire, which would result in you losing all your artillery).

Ad a result, you now have to defend against a counterattack that does have artillery and the attacker’s advantage, and you don’t have any defender’s advantage because you haven’t had time to fortify your new trenches, and the casualty ratios swing right back against you. –Wobulating