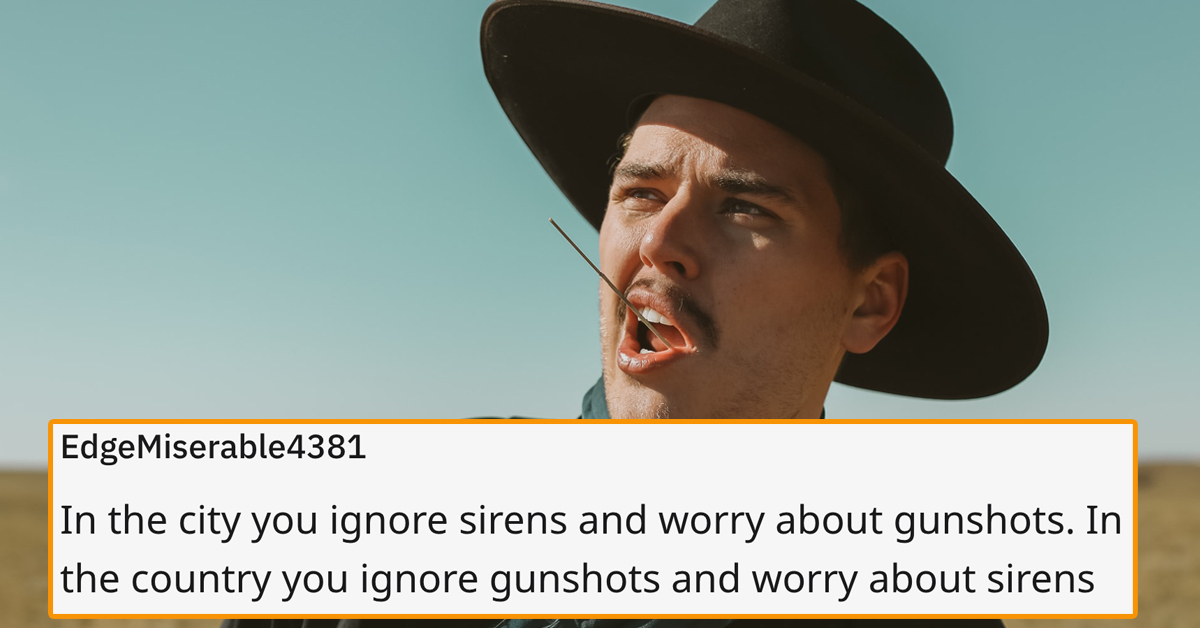 The country and the city have their share of differences and moving from one to the other can be a real culture shock for a lot of people. That’s not to say we city-folk don’t daydream about living in big, open spaces with nothing but nature around us. I sure do. And since COVID, I’ve thought about that move more and more.

So I know I’m going to look through this list from u/citytiger‘s question “Redditors that grew up/live in the country what’s something every city kid should know?” while stalking Zillow.

Everyone should know the feeling of going to bed with the windows open, listening to the frogs and crickets, plus the occasional freight train way off in the distance echoing in the night.

I have missed this every night since moving into a fairly developed area 25 years ago. There’s a certain peace to be had from the little things that can’t be replaced by convenience.

Chances are that everyone in the local grocery store already knows all about you even if you’ve never spoken directly to them. They also probably already know what you drive and where you live. This is all true for a smallish town, at least.

If you move to the country to get away from the city, you will smell poop. Cow poop. Horse poop. Pig poop. You will smell it. Not every day, but if they are fertilizing a field it will be noticeable. Don’t complain to the town/county/state because they’ll laugh at you.

One time I played a gig in Wisconsin and the dude at the bar says, “Hey, you’re not from around here, huh?”

I said, “How could you tell, my accent?”

He said, “No, I just never seen you before.”

How much noise there is from bugs after dark.

Watch for deer, especially at night.

You might live 45 minutes from familiar chain restaurants, but that tiny ice cream shop that’s open only in the summer is a way more memorable experience anyway!

There are not many choices for extracurricular, especially if you don’t want to drive very far.

You should probably know how to change out your spare tire and jump a dead battery. Also, driving on gravel/dirt is not the same as blacktop.

Small-town cops are really bored, so you probably shouldn’t speed.

Mountain lions are f*cking deadly; stay out of the woods at night.

Growing up our neighbor had a Newfoundland – big dog because where we lived you had to have outdoor dogs to discourage dangerous animals from your land. Mountain lion jumped the 6-foot fence to the dog run, finished off the dog, and carried it back over the fence. Those things don’t mess around. I had another friend who was tracked by one when she was in grade school. She was riding her horse and happened to see a shadow move outside the arena. Her family owned a small pack of cattle dogs, none of which had even noticed the mountain lion just feet away from them.

Don’t walk into a farm and pick fruit, unless you’ve been given permission first. That’s the farmer’s income you are pilfering.

Don’t walk behind a horse; don’t touch random metal fences unless you want to get a shock; and everyone you meet either cares too much or couldn’t give a sh*t about you.

Stay in the road/ruts when driving on a property. If you get off of it, you may hit a septic tank or a leech line and there will literally be $h1t coming out of the ground. Sewer systems don’t exist in most rural areas