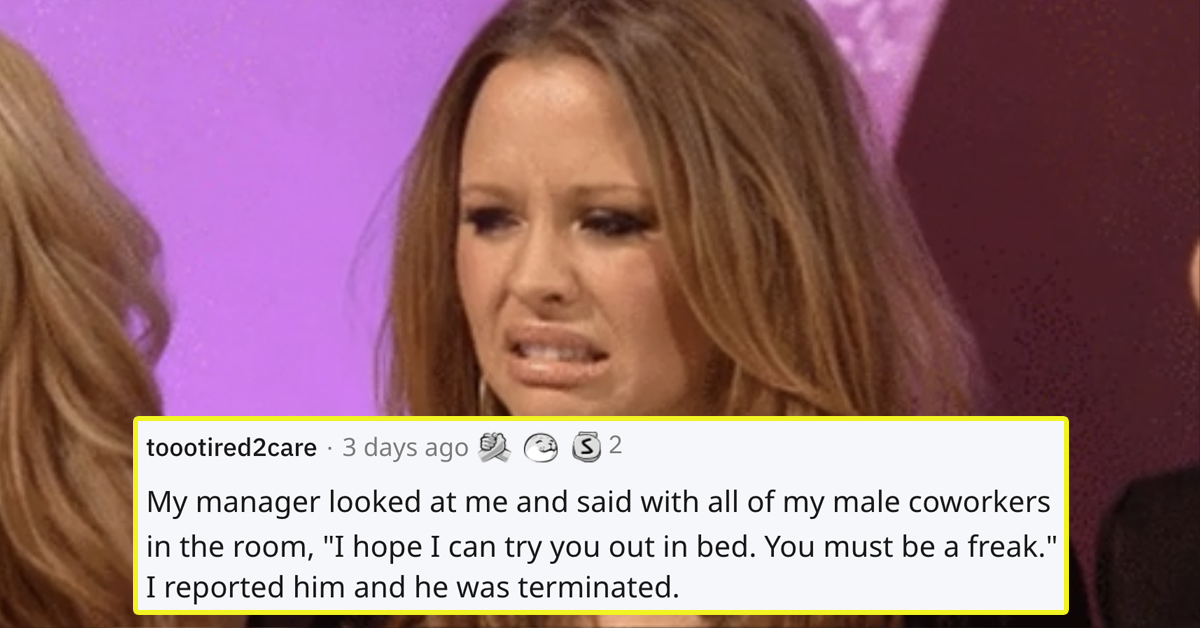 Dating is hard. For men, approaching women can be difficult. Sometimes it’s tricky to find the right words to make your feelings known, and you end up screwing up the delivery. And for women, it’s no walk in the park either. Women are on the receiving end of these attempts at flattering and it can easily become awkward and embarrassing for everyone involved.

In a recent Reddit thread, women are chiming in to answer the question:

“What’s the most embarrassing thing a man has said to you?”

The answers range from silly, thoughtless but harmless comments to downright predatorily and racist remarks.

Here are 20 of the most embarrassing things men have said to women, according to Redditors.

My manager looked at me and said with all of my male coworkers in the room, “I hope I can try you out in bed. You must be a freak.”

I reported him and he was terminated.

“Damn girl, are you as young as you look? Cuz I’ve got a white van just around the corner.”

3. Dumping him was obviously the right choice.

My ex who said “In that outfit you look highly underage. Like, 15 or something” and then proceeds to try to HAVE S-X WITH ME.

At least these people flaunt with their red flags, makes it easier to avoid.

4. That’s one way to help with depression.

“You look so hot when you’re depressed.” I was literally trying to kill myself. It did take me out of my depression a bit.

I brought a guy out with my friends once and we were talking about nicknames family/friends gave us and he goes “my friends call me silver back gorilla because they recognize my alpha vibe”. Obviously a damn lie.

6. You know what they say about assumptions…

My brother and I was in a car accident. The other drivers fault. It’s kinda easy to see that my brother and I are siblings we keep out of each others space. Like we sit on opposite sides of a row of seats. They sued the insurance company and we had to go testify in court. The guy said loudly in front of the judge and lawyers that of course I’d lie for my boyfriend I f–k him. The guys lawyer told him in not so quiet voice that we are siblings. He turned beet red and lost the case since the evidence clearly showed he was at fault. I had to wait till we left the court to laugh my a– off.

7. Sometimes, it’s better to be quiet.

A white man once said to me, a black woman, he could be the marshmallows to my hot chocolate.

Dude I was talking to asked if I was looking to have kids. I said “not anytime soon” (I was 20!!) Proceeds to tell me my breasts would look great swollen with milk.

9. There are stupid questions.

“Wait, how can you be both Korean and Chinese?”

10. Referring to other men as “betas” is also a red flag!

“God. I hate being around all these betas.” We were at the gym. He was also 29 and I was 18. That whole 6 months was an embarrassment.

I was at church with my Dad and one of the old men came up. He pointed at me then looked at my Dad and said “I see you’ve brought your concubine with you.”

This was after he had smacked my butt with a rolled up newspaper.

I never went back there again.

I posted a Facebook status about working out and this guy id never met before commented “if you’d like to work out together, I’ll give you a very special protein shake afterwards. Wink” implying his sperm. this man commented that publicly, it front of everyone. I still cringe thinking about it.

This guy was trying to be discrete about weed and asked me “so…you like broccoli?”

I worked at dollar general for a short time after high school. I am biracial (black & white) and a white man I was ringing up winks at me and says “You know, I really like colored girls” and the guy behind him just said “DUDE?”

“I only like vulnerable girls. I want a girl who is reliant on me and will just cry on my shoulder.” That freaked me out, especially since I had mental health issues when we first started dating. Guess the mental state of his next girlfriend.

16. Hopefully, she called the cops.

A man I was serving heard I was Asian and then said, “I like Asian girls, they remind me of children.”

“You look like a clown with all that makeup on.” – My (now ex) husband on our wedding day.

19. This one clearly doesn’t think before he speaks…

It was Juneteenth and this man looks me up and down and says “I’d buy you if you were a slave, you look…strong…”

And no we were not dating and I wasn’t interested in him.