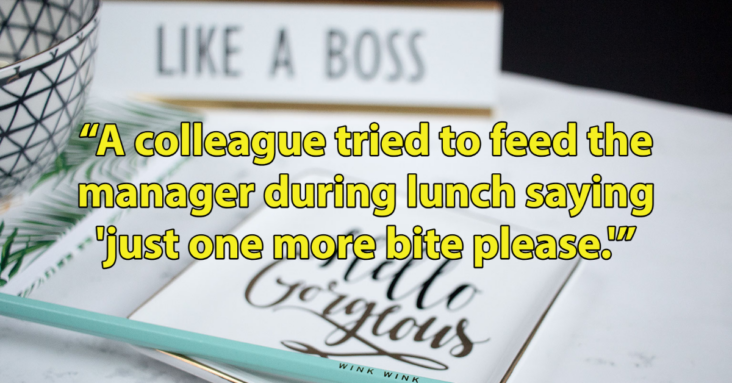 Chances are, you’ve run into a butt-kisser at work. Maybe they just go above and beyond to get in good with the boss. Maybe they buy them expensive chocolate every Friday or treat them to lunch. Compared to these rather mild gestures, however, are the extreme butt-kissing moves.

Can you imagine offering to massage a coworker’s feet?

On Reddit, folks are talking about the most cringe-worthy butt-kissing they’ve ever witnessed.

And it’s times like these I am overjoyed I work at home and don’t have to see any of this stuff.

“The worst was a guy I worked with at my last job doing HVAC…because the boss was going to get a full report on whatever crew he worked with that day. If you said something negative about the boss, he was going to tell. If you were a minute or two late coming back from lunch, he had a pic on his phone with the time stamp. If you didn’t hang something perfectly level or straight, he’d toss a level on it, snap a pic, send it to the boss. He also came in every Sunday and washed all the trucks (with no pay) to make sure we kept a good image. Found out eventually it had nothing to do with the job…he was just dating the boss’s daughter and he was trying to ‘prove’ himself.” — Emcee_Such_N_Such

“I work with a girl who threw a baby shower for a manager’s (not her manager though) wife, thrown in our office. Meanwhile her equally pregnant ‘friend’ in the office was invited to the party but received no shower of her own or even an acknowledgement from the suck up. Funny thing is everyone hates the manager so nobody really stayed longer than they had to. Also she tries to call us out for not getting gifts for the manager on national boss’s day as if him being paid more to f*ck things up for us isn’t enough already.” — aild87

“Had a coworker in my marketing team who was a lead designer. He was often pretty dismissive of junior level employees, or would try and one-up everyone’s stories (you tell him you stayed at a hotel at the beach over the weekend, he tells you he stayed in a penthouse at the same beach for a whole week). He also always tried to be in proximity of senior staff members and would brag loudly if they were within an earshot, hoping they would hear how awesome his life is, I would assume. One day, a VP from our company had come up to talk to somebody in a pod close to ours. The pretentious designer loudly asked me about my weekend, I gave him an answer. He responded loudly, one upping my answer, noticed the VP wasn’t paying attention to him at all, quickly got up, hovered behind the VP while he was talking to the other employee, eventually the VP cracked a joke and the designer let out the loudest, fakest laugh I’ve ever heard, startling the VP, who up until then was not aware that this guy was standing behind him. VP just got an awkward close lipped smile, quickly nodded his head, and walked away. Designer came back to our pod, sat down, and started working as if he was never mid conversation with me.” — rock-or-something

“A colleague tried to feed the manager during lunch saying ‘just one more bite please.’ Both female but still, was so embarrassed to witness that.” — edrosesLover

“Fake laughter at the boss’s jokes…laughter that goes on for WAY TOO LONG so that even the boss notices and gets PO’d.” — PinocchioWasFramed

6. Taking Credit For Stuff Other People Do

“Other receptionist at my work is a huge a*s kisser. Calls herself head receptionist when she’s really just a part timer that doesn’t do her job right. Will constantly have ‘meetings’ with the bosses and take credit for things other people do. Most recent example is when a client brought us donuts and left them at the front desk. I was in a room but heard the convo between the client and her about the donuts being a gift. Then heard her walk to the back and announce to our boss that she (receptionist) ordered them donuts because they work so hard.” — SmallScreamingMan

“I had a coworker that went to the boss’s apartment to massage his feet.” — Korplem

“My boss sent me out to get her boss a birthday card and gift, which was all fine and good as it meant an escape from her for an hour or so. The card was nothing out of the ordinary, but the cake was very fancy and not your typical office birthday cake. I then had to swing by Tiffany’s to pick up the bracelet that was the actual gift, just from her to her boss. Expensive gifts to colleagues let alone managers, were not the done thing there (and it wasn’t even like it was a bank or anything high end) so it seemed horribly out-of-place and blatantly butt-kissing.” — Click_for_noodles

9. Trying To Make Others Look Bad

“Part of my job is delivering children’s books to some agencies to hand out. One month our executive director didn’t like the book that came in. There were a couple lines she felt were inappropriate. She asked me not to deliver them and she would order new books. A coworker of mine noticed I didn’t deliver them and took it upon herself to do it. The executive director doesn’t care for her and she was trying to get on her good side. She thought she could make herself look good by making me look bad. I thought she went to lunch, had no idea she was out there trying to do my job. She came back and proudly tells others that she did my job and maybe now the director will be pleased. She came to my desk and angrily says, in earshot of the director, ‘I just went and delivered the books that you never delivered. I shouldn’t have to do your job on top of everything I’m already doing for this agency.’ I just looked at her and said ‘Well that was dumb.’ She went to the director next and told her that she delivered the books since she seen it hadn’t been done and asked if there were any other tasks she could do for her. The director was pissed!!! She was planning on returning those books so she could order different ones. They weren’t labeled with our logo yet either, which she would have seen if she checked. It’s required that we put our logo on them. The director tore into her for overstepping her boundaries and trying to make me look bad. She tried so hard to kiss ass and it backfired big time. Oh and I was praised in front of her for listening.” — mjsmore33

“At my job there was this guy who kept buying his direct supervisor lunch everyday, one time the supervisor asked him why he kept doing it, he responded with ‘The king’s gotta eat’ everyone in the immediate area cringed super hard at that, including the supervisor.” — ActualWater1994