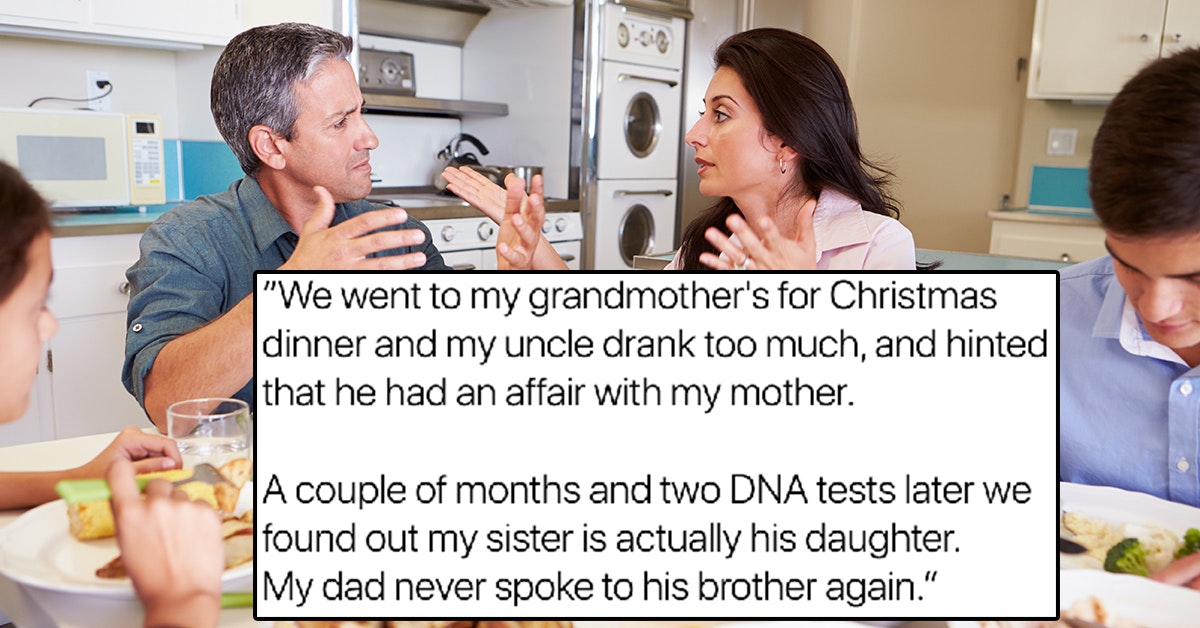 Every family’s got its secrets, ranging from children nobody knew about to actual bodies buried in the backyard. Sometimes, families share their truths with the younger generation when they’re finally old enough, but some secrets are meant to be taken to the grave and end up exploding when it’s least expected.

However they first became known, Reddit loves coaxing people into revealing those stories to a whole internet full of strangers—and these AskReddit threads looking for just that don’t disappoint.

My uncles are infamous criminals who killed multiple people. I thought they bred dogs.

My father’s brother killed 4 girls when he was in high school. My father was the one who found out and told the police.

My great great grandfather was exiled and banned from Missouri for being a sheep thief.

We found out after my grandfather died that none of his seven children with my grandmother were his and that they all likely had different fathers.

My uncle was chopped to death by his sister with an axe.

My grandparents are first cousins… an uncle on the same side of the family is in prison for the assassination of a presidential candidate(family still says he was framed and is innocent).

That my uncle was married for ten years… when we read his wife’s book obituary in the newspaper. He never mentioned getting married, and he hasn’t mentioned her passing since. We always knew that he liked his privacy, but dang…

The scars on a elder family member’s wrist were not from a botched suicide. They were from her mom trying to ‘protect’ herself and her kids from the approaching red army. (That was at the end of WW II in Germany). This made it so much worse.

My grandmother recently died. She was famous in our town for her amazing cooking/catering, in particular her turkey dinners. Notably, her gravy was absolutely amazing…When she died this spring, I was going through her pantry and found an entire bucket of KFC gravy mix. She was literally using KFC gravy mix as a base to make her incredible gravy.

My great grandfather didn’t die of cancer. He died from complications after being shot when one of his businesses was being robbed. Maybe. He also spent a lot of time in Atlantic City. He also had a lot of partners in the Teamsters and other unions in coal country. Also, everyone called him “smiling Tony’ but his name wasn’t Tony.

When my mother fell ill and I took over her finances I found thousands of pounds of gambling debt on her credit cards. Then I found adoption papers for a child she’d had before me that she’d never mentioned. Then another family member told me my dad didn’t die in a car crash but committed suicide in prison.

My great-grandmother wasn’t actually Mexican but rather was adopted by a Mexican family from a Chinese family who was being kicked out of Mexico when railroad construction was over. She always had more typically Asian features but only spoke Spanish and it was never really questioned.

My cousin is actually my sister. Apparently my mom got pregnant really young and her much older sister adopted my sister and raised her as her own. It was actually an amazing moment when we found out. My cousin (sister) and the sister I was raised with and I are really really close. Just happened last year. We’re all old now (I’m 50 and my cousin/sister is 58) so it’s just a really neat thing that makes us all happy.

We went to my grandmother’s for Christmas dinner like we did every year and my uncle drank too much, and kind of hinted that he had an affair with my mother. A couple of months and two DNA tests later we found out my sister is actually his daughter. My dad never spoke to his brother again.

My dad is in a cult…Kind of like a doomsday cult. They would predict the end of the world a lot and then turn around and be like “wow, your prayers stopped the apocalypse!”

To put it shortly – my family tree, is more like a very long branch. Yes we have the genetic defects to prove it.

My grandfather got out of serving in Vietnam by robbing pharmacies and going to jail for years.

My uncle is believed to have murdered two Australian police officers in the late 80’s.

My parents led me to believe that my grandfather (on my mother’s side) had died due to a heart attack. A year later they revealed he actually shot himself in the head.

Grandma’s top-secret pie crust was actually just Marie Calender’s from the grocery store, set in a fancier dish. She messed with her daughters-in-law for years over it.

The reason I had a “live-in baby sitter” when I was 5 that moved in at 2am was because my mom’s cousin killed 2 kids and we ended up harboring his daughter during the trial. He’s the only person on death row in my county.

My aunt started the communist party in her country. It got quite large, her children fled the country, and I still don’t know what happened to her.

My dad’s sister had a secret daughter that would have been approximately his age. She was 16 years older than him, and the family didn’t tell him until he was in college. In their small town, there is a not-zero chance he could have/did date his niece.

My dads uncle died in a boating accident with his cousins. My family let me know he was possibly drowned in the middle of the lake by his cousins because of some money issues. No one was ever prosecuted though and the family is still very close. Weird.

My grandparents spent some time in lockup after my grandpa killed their newborn in a shell-shock-induced frenzy. They were jailed because they buried her body in a cave and tried to hide it.

I always thought my uncle Dan died in a car accident. Turned out he owed lot of money to a loan shark. He and his partner were asked to play Russian roulette and the one who survives can walk away and get an extension for payment. Uncle wasn’t lucky.

My father got my mother pregnant when he was her teacher in high school. He was thirty and married. She was fifteen and his student. They ran off together, he got a divorce, and they got married in a state that allowed marriage at 16, two months before my older brother was born.

Gramma didn’t decide to move in with us because she loved us so much and wanted to spend more time with us. Gramma moved in because her son was a meth addict and convinced her to put his name on the house, take all the money out of it “for renovations,” and leave her homeless.

Grandma’s brother was adored by a famous female poet, but he was gay and murdered by his lover. This was really a secret because his mom was very religious so my family only found out later. My grandma loved him a lot too and never fully got over his death.

My cousins lived with us for a while and we thought that was fun because it’s like a sleepover every day. One time our mom even took us out of school to pick them up.

I learned later that it was because child protective services took my cousins away from their mom because of mental health issues. My mom offered to take her sister’s kids until she got her mental health back in order.

Great Grandpa was a soldier opposing the Axis powers. Him and his squad were caught by Italian troops and given the death penalty along with his friends. They would be executed together.

At the time of the execution all of his mates died in front of his eyes but he survived because the soldier missed. Without skipping a beat he faked his death by…. well lying on top of his deceased friends bodies. Surprisingly it worked and he got to escape.