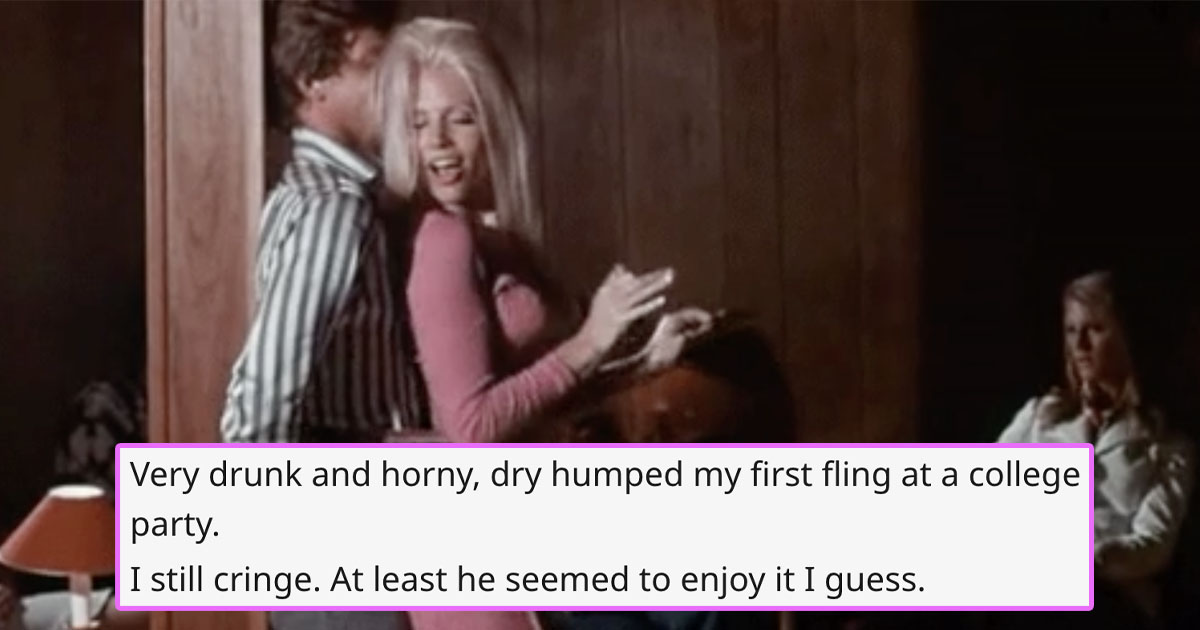 I know, right? Even this title has you cringe-laughing. Thanks to u/Solar110 who asked Reddit:

We can all cringe-laugh together. After all, your brain SHOULD turn off when you’re about to get some… right? Right.

Check out some of the best below.

1. That guy from Nantucket

October 30, 1991. I walked eight miles through hurricane force winds on Nantucket Island to spend the night with my girlfriend.

Like twenty years ago, I was heading to my friends house when I remember that this cute girl from class said she worked at a Starbucks but one that was like 45 minutes away. I impulsively drove the whole way there for a chance to see her. She wasn’t there. When I showed up to my friends house they were like why are you like an hour and a half late.

The lights were still on and everything.

I still cringe. At least he seemed to enjoy it I guess. And at least everyone was as drunk as me.

Not me but my step brother when he was a teen put his dick into the mouthpiece of a plastic flute and “blew” himself. My step mom walked in on him and now every few Christmas he gets one as a gag gift.

One time I made love to a stack of bathroom towels.

Trying to choke myself with a belt and ending up putting all the pressure on my arteries instead which only got me the biggest nosebleed of my life and feeling dangerously lightheaded.

Think IcyHot cream would make an acceptable lube for jerking off.

In my defense, I was in my teens at the time.

Wanted to jerk off, climbed a hill to get some privacy while still having the rush of exhibition. Apparently there must have been some poison ivy on that hill.

The next morning was not pretty. Pretty sure my dick swelled up 2-3x its girth. It hurt to pee and I had to be naked as much as possible to avoid rubbing.

Had sex because I was going to get a vasectomy soon and knew my companion pickle would be out of action for a while, wore a condom, it split, now I have a 6 year old.

For those of you that don’t know what Flarp is, it’s a very moist and squishy putty that makes fart sounds when you press your fingers into it. My local dollar store sold giant tubs of it that you could jam your whole hand into for massive farts and laughs for the whole family.

My friend and I bought one and took turns fucking it while watching Girls Gone Wild in his dad’s man cave.

I once fucked a watermelon, that was really weird. Also kinda tricky getting the right hole size so that it actually was nice thrusting in and out of it. Felt really good though, up to the point where you feel guilty when throwing it away right after.

Left the house at 11pm to drive 4hrs to have sex in a sleeping bag in a hotel , then had lunch with her parents the next morning. We have been married for 15 years this December so it worked out

A girl asked me over during the daytime but I didn’t have a smart phone with google maps, so charted the course to her house onto a huge town map I found in my parents house.

Was walking the streets for about an hour holding this huge map trying to find my way, felt like bilbo baggins.

Didn’t have a car at the time. My dumbass walked 4 miles to hers at 2 in the morning. Called multiple times, she was dead asleep. Dragged my blue balls another 4 miles back and cried myself to sleep

As a 14yr old, used a “Socker Bopper” for fun times. Any port in a storm, and all that. My dumbass didn’t think about how chaffed I would be afterward. Had to skip football practice cause I could barely walk straight.