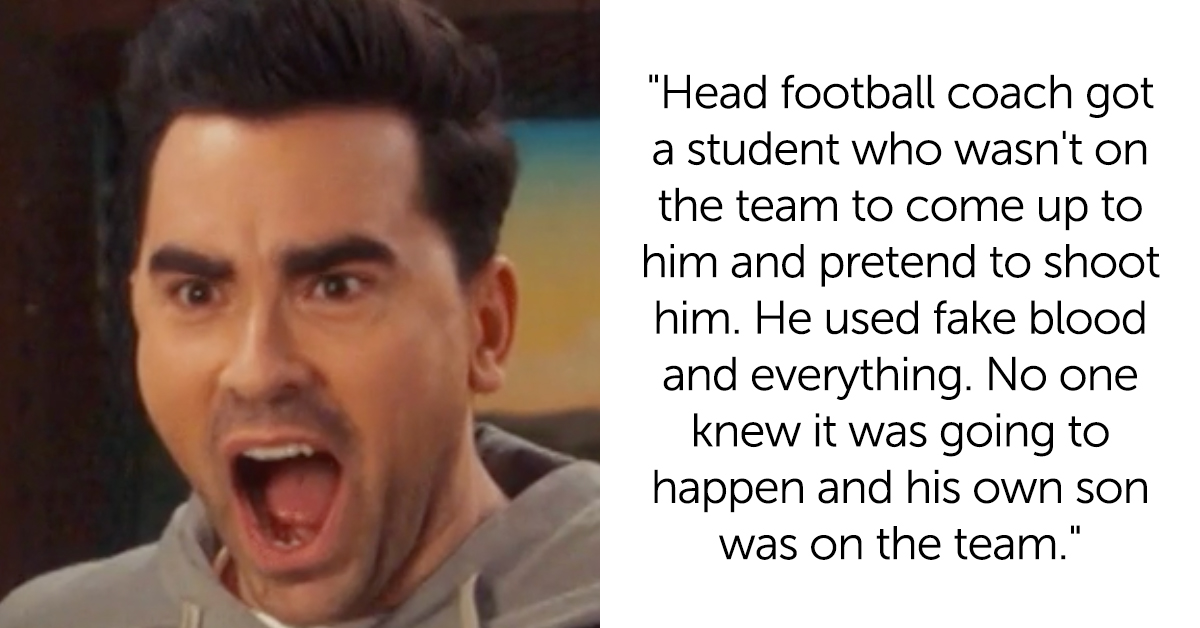 Being a teacher is an incredibly difficult position; the pay is god-awful, the parents are nightmares, and the students can be challenging. But we still expect our teachers to have a certain level of professionalism and it’s important that they are safe adults for our kids to spend time with.

u/Surtion recently wondered, “How did “that teacher” get fired for at your school?” and we gathered some of the top replies. Be warned, there are some stories of abuse.

Male substitute teacher that taught regularly at my Catholic high school who wasn’t fired, but banned from teaching in our female P.E. class after we reported him for repeatedly instructing us to “stretch” in positions that were sexual/inappropriate. For example, he asked us to bend over with both hands against the wall and “shake our hips back and forth”.

An hour before the State championship football game the head football coach/pe teacher got a student who wasn’t on the team to come up to him and pretend to shoot him. He used fake blood and everything. No one knew it was going to happen and his own son was on the team.

She didn’t get fired but quit. Some students in class found out she miscarried and started hounding her til she broke down and cried under her desk. It was 7th or 8th grade

4. What the actual F

My math teacher was a volunteer first responder (in NY), she left school to help out during 9/11 and was fired for not showing back up for two weeks.

Not just that teacher, but the principal. He’d gotten wind that he might be fired because of less than ideal job performance, so he decided to drum up sympathy by belly stabbing himself in the men’s room and blaming a student. Said student was arrested but the police were immediately suspicious of his story when they noticed his shirt was unharmed. In other words, whoever stabbed him courteously lifted up his shirt beforehand so as not to tear a hole in it. He wound up being forced to resign, in addition to getting probation and a heavy fine.

Geeky A/V teacher that everyone loved. Knew he was a geek and owned it. Caught in a predator sting trying to solicit underage girls. The kicker was a spring school levy was coming up, local police conspired with the school district to hide the charges for 3 weeks until the levy was passed. Someone substituted his class for 3 weeks.

He didn’t come to parent teacher interview night. The next day, he was late for class and crashed his pickup into a brick sign outside the school. Cops showed up obviously and allegedly he blew twice the legal limit. He called the principal ‘a cunt’ as he was taken away.

9. To catch a predator

One of my high school teachers was caught on To Catch a Predator.

Middle school coach. Accused of child sexual abuse. Before he could be charged, he jumped in front of a train.

Had a teacher charging parents extra money for a field trip. Was pocketing the extra money.

High school gym teacher, apparently he showed up to a hotel room expecting to bang a 13 yr old but got busted by the cops instead.

Middle school theater. She played massive favorites in a way that even made the favorites uncomfortable, so all the students hated her. However, all the adults (my parents and my friends parents, at least) thought we were exaggerating because, ya know, theater. I assume someone in the grade after mine got a responsible adult to listen, or the school got tired of her doing Grease every single year. After she was fired she started a weird cult where she would speak to a Spirit named Micah for people, so I feel pretty validated on the whole calling her crazy thing.

Super cool guy. Vietnam vet. Some fucking idiot pretended to throw a “grenade” and the teacher hit the floor. Then apparently punched the kid in the face. Fired. Had a sub the rest of the year who kept bragging about how many planes he has and how he’s just counting the time to go flying. But won’t take any of us with.

User avatar level 1 xandrenia · 23 hr. ago Good looking math teacher had a reputation of hooking up with senior girls, like days after graduation. He did this almost every year. People even started to make bets on who Mr. S was going to hook up with this year. There was nothing technically illegal about it because they were all 18 and graduated, but it got to the point where parents were calling in and saying they didn’t want their daughters in his class. They were finally able to fire him when he showed up to work drunk.

She wanted the kids to cheat on the reading test so she can win a pizza party and a trophy.

Our Principal in high school. Her husband cheated on her with another teacher that worked there and they went through a nasty divorce. Next thing you know she’s making her way through our football team. I think she slept with 3 of them and ended up dating one for quite a while. Oddly, I don’t recall if she was ever fired or left on her own.

She used to come to school drunk and try to get us to convert to Scientology. I still don’t know a single thing about Scientology because no one could comprehend wtf she was talking about

When I was in 6th grade the teacher of the other class was pregnant and often had a sub. The sub got fired, but since he was there so often it felt like he was a normal teacher. He was pretty weird tho, and did a bunch of weird things. Some of these include: bringing beer to class and drinking it (nobody believed the kids when they’d talk abt it), answering student’s questions very wrong and yelling at anyone who corrected him, forgetting the kids had recess even when the bell rang and wouldn’t let the kids outside, but the final straw that got him fired was when this kid asked to go to the bathroom and he screamed at him. He called this 11 y/o a cunt, a bitch, fucker, shit head, all the nasty bad words that would freak out a kid, all for asking to go to the bathroom. In front of the whole class. Obviously the kid started crying and begged to talk to the principal, and the sub just screamed at him more. My teacher from down the hall heard it and rushed over. Yelled at the sub, took the kids into his room, and called the principal and the vice principal over.