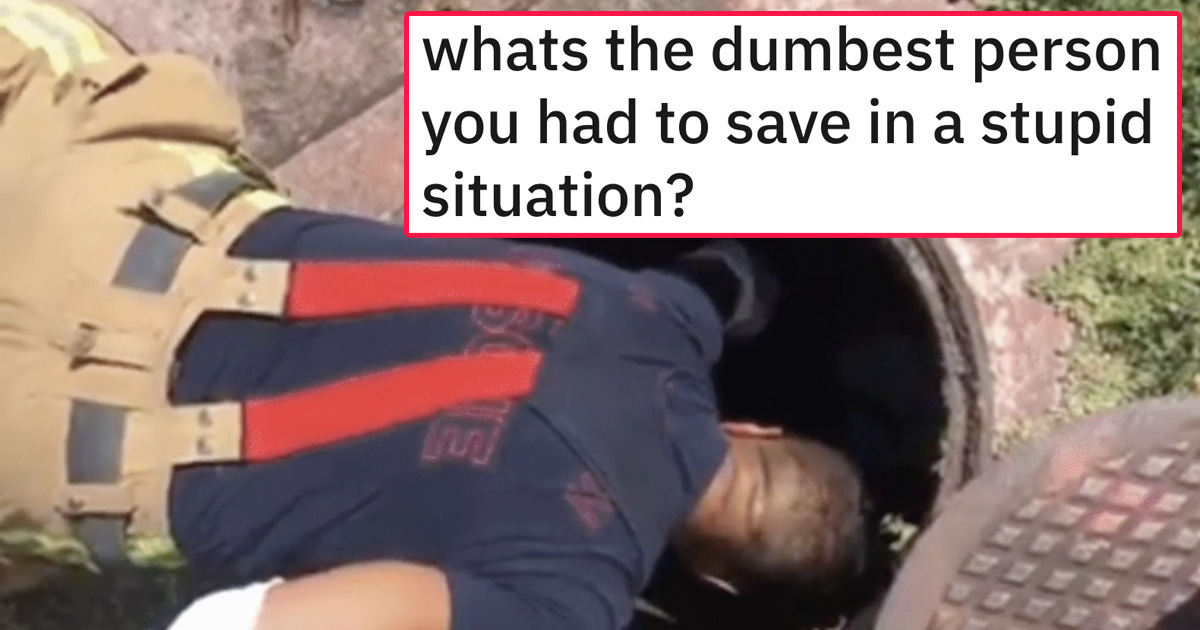 “What’s the dumbest person you had to save in a stupid situation?”

And the stories we got were not only absolute gold but also featured total contenders for the Darwin Awards. I mean, how stupid can you GET?

Dumbass tried to cross a raging river in zero degree weather about a 300 foot span on a snowmobile. He lived but didn’t make the crossing and the machine was recovered days later.

I once had a firefighter tell me he almost died in a house fire while going back into the house to look for the owner. A neighbor was concerned about why the firefighter was still in the residence so he asked another firefighter. This is about how the exchange went:

Neighbor: Why is that fireman still in the house?
Firefighter: He’s looking for the owner of the home.
Neighbor: He is right over there with the video camera.

Turns out the owner did not think it was important to alert the fire department he was out of the house. Instead, he was just taking video of the whole event.

The fire started because the owner had tried to smother his barbecue cooker flame with left over wood from the siding that had been installed on his home. The owner did not realize it would burn. Burned his whole house down.

Hurricane Floyd. Eastern NC. I had a farmer with a large family that refused to evacuate his house. Stubborn bastard. River had broke loose, floodwaters were coming up fast, and the police had given up on changing his mind. I drove my truck right up into his yard, rolled down the window and asked him to dress his kids in something orange or bright yellow. He asked me why and I said “So body recovery will be able to distinguish them from all the dead pigs floating around.”

He told me to fuck off, but 5 minutes later he had the whole family in the vehicle and they got the hell out.

We needed to close the main connection through a forest over the winter because the trees were falling faster on the road than we could remove them due to way to much snow falling. Also the redirection was more than an hour longer due to the snow.

Some cars thought that they would come through but turned around as soon as they saw the trees on the road.

One semi also thought he’d get through. He drove up to the trees and called the fire brigade and complained why we didn’t remove the trees. As he was calling a bunch of trees behind him also fell locking him in.

It stood there one month before the trees and the snow could get removed by us that at least the semi can back out. We needed another month until the road was free again.

5. Rowboat for the gram

Easily the dumbest person I encountered was a mother of 4 who decided it would be an awesome idea to get a Facebook/Instagram worthy picture of her kids (all under age 10) sitting in a rowboat.

Mother untied it from the dock and thought she’d just pull them back with the rope… That she forgot to hold on to.

They floated a half mile down the river before the two oldest boys managed to grab a branch hanging over the bank.

It was really surreal to see 4 young kids, all in matching clothing, sitting in a boat waiting to be rescued. I have no clue what happened after, but they were physically fine, just scared, a little tired but the mom was in full blown panic mode and kept getting in our way. I hope she’s making better choices now.

I was called to a home to get a pie out of the over before it caught fire. The lady went to the store and was delayed for some reason. she called 911 to have the fire department take the pie out of the oven and place it on the stove. The call came in as ” Something stuck in over and unable to turn off stove”. Still #1 call in 32 years 🙂

Years ago we had this call straight out of Caddy Shack. Some guy had gotten tired of this gopher ruining his yard. Little did he know though he was facing the Sun Tzu of gophers. The homeowner, dwelling upon his experience from Vietnam, decided that the best way to deal with the gopher was to treat the situation like a VC tunnel, in lieu of a frag grenade he poured a five gallon can of gasoline down the gopher hole, waited with a varmint gun, and lit it off.

The ensuing explosion caused a small crater to form in his yard. I am still thoroughly impressed that there was a proper fuel to air ratio in the network of tunnels that allowed for such an explosion to happen. However the gopher refused to surrender without a fight. The gopher ran out of the hole engulfed in flames, causing the guy’s yard to catch on fire. The gopher sprinted into the guy’s shed still on fire and burrowed into a void space in the wall, where he died. Like the martyr perk from Modern Warfare his still flaming remains set the inside of the wall on fire as well as several flammables.

In the end the guy’s backyard was ruined and about a quarter of his shed burned down taking out a bunch of power tools and a zero turn mower. He definitely would have saved a few thousand dollars if he had hired an exterminator.

Dude jammed his wiener into the back of a computer tower. According to him, there was an opening back there (probably because old PC Towers in the Navy routinely had shit swapped out and they didn’t always cover openings when things were removed). So, because he was a fucking donkey, he stuck his finger in it and felt a light tingling sensation as his skin made contact with something electrical.

So he took the next logical step and whipped out his dick and shoved it into the back of this computer. What he did not account for was that the opening had sharp metal edges. But once inside, he got that tingling feeling and so he felt like he might as well finish the job before he pulled out. Plus, and this is where I had to stop myself from laughing, he felt it was “smarter” to pull himself out flacid rather than hard. -taps forehead-

A young girl around teenage years who decided those toddler swings with the seat you stick their legs through like a little basket so they can’t fall out was made for a teenage girl. She got stuck and lost blood flow to her legs. We had to cut her down and get her to a hospital to have it safely removed due to it basically becoming a tourniquet on both her legs.

One in particular I remember was a large man not wearing a seatbelt in an overturned truck. He woke up while we were working on him cutting the passenger side up to get down to him as the vehicle was on its side driver side down. He kept asking us how his son was. At first we didn’t get it. Then we realized he was laying on his 15-16 year old son and due to the man’s size we didn’t see him. The son was wearing a seatbelt but he died because his father smashed into him and smothered him to death while we worked rather than just wear a seatbelt extender so his seatbelt fit.

A motorist had a bad alternator and the car died while she/he was driving. The electric lock control stopped working. We were dispatched for a person trapped in a motor vehicle. On arrival, the advice was given to manually lift the lock knob.

You can easily tell the ones who will not survive the first 24 hours of the zombie apocalypse.

Called to a lockout. Get to the location and am met with “we just need a jump start” and think, ok, wrong call. Get out the cables and ask them to pop the hood… “Oh, we can’t. We’re locked out.” Driver is holding keys in hand. Passenger window is down. I starting backing away assuming some kind of theft scam.

They actually thought they were locked out because the key fob wasn’t unlocking the door. It turns out the fob battery had died. Showed them how to use the key after checking ID again the registration retrieved though the open window. Vehicle battery was not dead.

Firefighter/Paramedic in suburb of Phx. Had to transport a guy to the ER because he was constipated. His wife tried to dig it out with a wooden spoon. Spoon got stuck and hurt to move it.

Two bikini clad girls had to be rescued from a swift moving river in a canoe. Neither girl brought a life vest or a PADDLE

Had a drunk guy in Antarctica chase a penguin. Penguin stuck his beak through the offending drunk guy’s calf. He got sent home, and a report on international treaty breach wound up on some congress member’s desk.

Dude picked up a metal ring from a hardware store in lieu of paying for an actual cock ring.

It got stuck. He went to the hospital. The hospital called the fire department because a dremel tool turned out to be the right tool for the job.

Had a fellow who was running from the police. He decided to climb on board a chunk of ice that was flowing down the river. I am sure he thought he was a genius at the time, but the issue is that there isn’t really a whole lot north of our town for a few hundred miles, so his long term planning wasn’t great. Eventually we found him hiding in a small icy overhang on the side of the river suffering from hypothermia.

I was a volunteer firefighter many years back. One summer, after a long period of no rain, two good old boys decide to have a few (dozen) beers and take their Jeep into a nearby field to go off-roading.

Well, ~2 ft. tall corn stalks that are bone-dry wind-up getting jammed up into the undercarriage, which, on a 90+ degree day, turns out to be hot enough to ignite a fire. The owner of the field sees the situation unfolding from their house and calls for fire and police.

Given the proximity to my location, I go directly to the scene after hearing the page go out and see these two assholes trying to drive the Jeep faster and faster to put the fire out. Eventually, the engine gives out, but they won’t leave the car. I physically had to reach-in, burning my arms in the process (since I didn’t respond to the station first to get my turnout gear), and pull them out – somehow, they decided that remaining in the car would slowdown the flames.

And because they thought it was a good idea to continue driving a burning vehicle around a dry field, we now have a significant brush fire and have to call mutual aid from another county to help douse the fire.

State Police get involved, I have a nice trip to the hospital. And assholes lose their Jeep and the remainder of their booze.