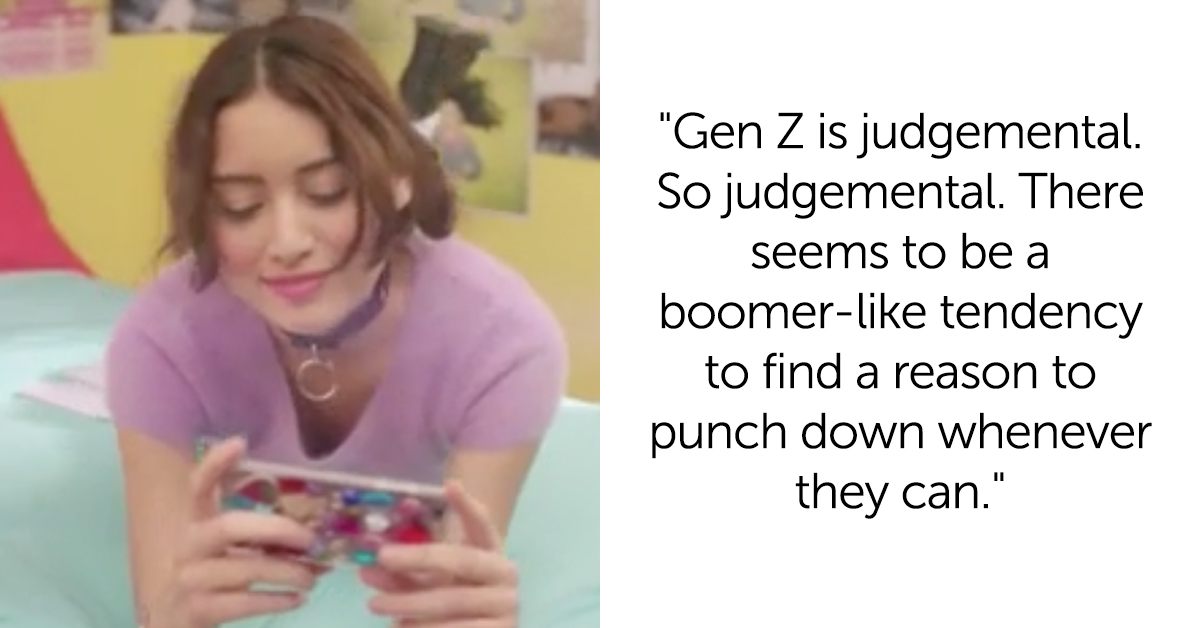 Here we go, another generation has entered the battle. Tisn’t all millennials and boomers anymore, friends!

Now we have Gen Z to complain about; and boy, they offer up lots of things for people to tilt their heads over. So let’s peruse this list from u/exxist‘s question on Ask Reddit, “What is a legitimate criticism you have about gen-z (post 2000 generation)?”

I would say primarily if you’re giving them directions or correcting errors that they have made, you have to use ‘softer’ language. I had a couple different students complain about an architect in the office, and the way he was speaking to them, they said he was a bully. This was very surprising to me, as this particular architect is one of the most social and friendly we have in the office. We are a small firm, no HR, so I pulled them off of his team and then I spent a couple of months covertly monitoring/ listening to the way he was speaking to his team. He was never bullying, but he is very straight forward with the way he speaks – no sugar coating if someone has made a mistake, just a straightforward correction and he can be very brusque with his instructions. I’ve switched the way we do things in the office now, so new students are always on my team (I used couched/ softer/ encouraging language with them) and then I pass them off once they get to know the ropes and grow a bit of a tougher skin.

Gen Z is judgemental. So judgemental. There seems to be a boomer-like tendency to find a reason to punch down whenever they can. They’ve got a knack for zeroing on the most seemingly inane things and turning it into a reason that they’re “better than you.”

Stop “pranking” and harassing service workers and fast food workers for tiktok views. Nothing screams “I’m a piece of shit” quite as loud as that.

I can’t tell you how many people I know who became narcissists through Instagram, extremists through Facebook, a troll through Twitter or stupid through misinformation with Tik Tok.

Their constant use and reliance on technology has severely hindered their people skills.

The Redditor who said Gen Z were behaving a lot like boomers stuck with me.

For assholes who talk about inclusion so much, they sure are a bunch of bigots.

My generation (Millennial) led a crusade to get rid of labels and just let people be people. Gen Z has gone the opposite direction and created a fucktillion labels. Funny thing is, we did what we did for the same reasons.

I forget where from, but something I heard recently stuck with me: Gen Z will respect your pronouns but not you as a person

Gen Z underestimate the permanency of their content on the internet.

That they’re offended on behalf of others, who may not necessarily be offended themselves.

Considering how popular Tik Tok is, I worry that they are too preoccupied with how they are by perceived by other people and trying to get famous instead of just trying to do stuff that makes them happy with people they like. Their worth isn’t measured by their online presence.

Sex positivity is cool, but sometimes yall take it too far and think that for some reason everyone needs to be polyamorous and should abandon monogamy. Cant tell you how many times others have pressured me to stop being monogamous, and just have a completely open relationship. Sorry, but I only have the mental capabilities to handle one partner at a time, and Im not going to share myself or my partner with other people romantically.

I also wish they’d leave us older millennials alone. I wish everyone would actually. We’re just over here trying to get by, so stop picking on our outfits and breakfast choices.

“Influencer” is not a valid career choice.

A lot of activism without a single molecule of understanding which leads to extreme radicalization.

They are profoundly uncurious about anything that happened before, like, 1994. Politics, history, culture, music, etc. They are simultaneously full of empathy for LGBTQ+ people and progressive on things like gender identity and mental health, but are also incredibly selfish in that they do not care about what previous generations went through or how things got to be how they are now.

A bit of wanting to look on the right side of history whilst doing the bare minimum, commenting online. A lot of gen Z is exceptionally poor at combining strategy with action and the expectation that every issue can be tackled if we all just do it. Millennials grew up jaded, but when gen Z grow old enough to realise society isn’t so easily fixed, they will easily be the most jaded generation as adults.