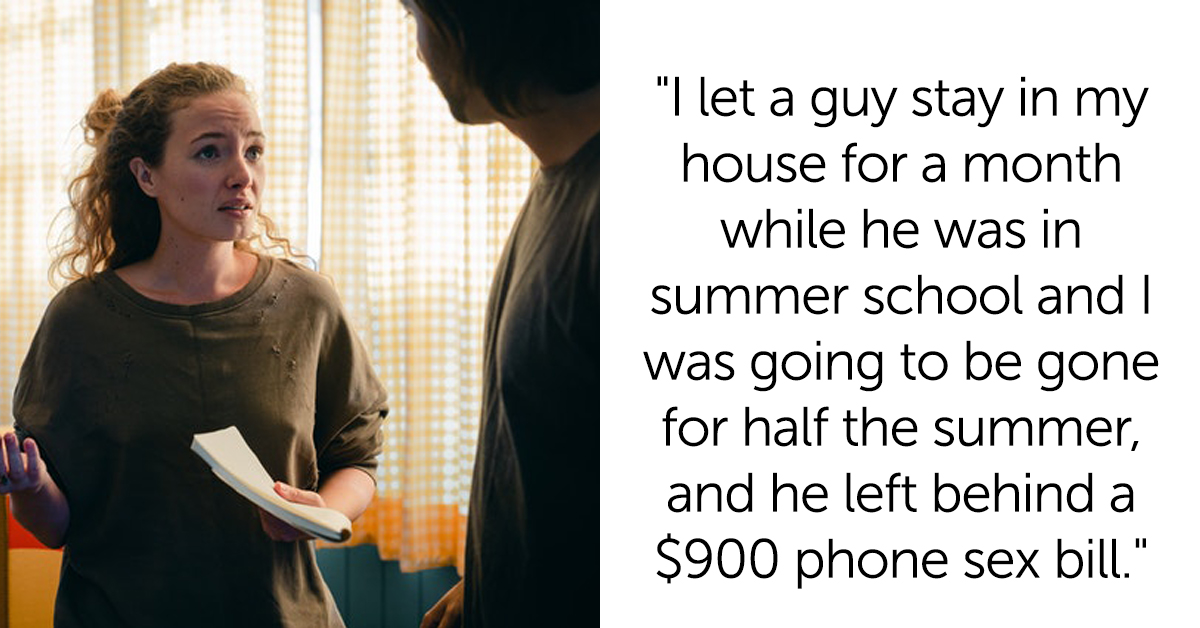 Being a guest in someone’s home, to me, means being respectful and thoughtful. It’s important to make sure your host knows you’re appreciative and there are definitely boundaries to keep in mind while you “make yourself at home”.

A Redditor recently wondered  “What was the worst thing your guest did when they took ‘make yourself at home’ very literally?” and the good folk of Reddit delivered. Boy, are these awful.

“My husband’s old friend stayed with us for two weeks while we were living in Japan. He was very smug and irritating. An instant ‘expert’ on Japan after a few days, when we had been living there for two years. Finally, he left on a Friday, and my husband and I had separate plans on Saturday. I returned in the afternoon to an unlocked door and the sound of the TV. I thought my husband had returned early. Nope, it was the old friend. Thinking we had gone for the weekend, he had broken into our apartment for an extra two-night stay. ‘You weren’t supposed to be here!’ he protested, and he refused to leave until my husband came back home and told old pal personally that he had overstayed his welcome.”—u/Charismaticjelly

“My brother’s best friend came to live with us for ‘a few months’ because he wanted to move back to our state. My parents agreed because he was supposed to go to college and they believed that a college education is important. Well, eight years later, he is still there. All of my parent’s children have moved out but for some reason, my brother’s best friend is still living there.” —u/xyz388

“My father-in-law was staying with us for a month. The spare room was an office with a sofa bed so it could double up for guests. He bought a double bed and got rid of the sofa bed. I lost my office.” —u/Equivalent_Parking_8

“My relative stayed with my grandma and proceeded to burn the house to the ground by deciding to have a bonfire three feet from the side of the house.” —u/lolppjoke

“I let a guy stay in my house for a month while he was in summer school and I was going to be gone for half the summer, and he left behind a $900 phone sex bill. It was the early ’90s and the bill came on paper and was about 100 pages. He would call while blackout drunk. Other than this, he was an excellent houseguest. He even told me that there were going to be these phone bills coming and that he would pay for them, but we had no idea that it was going to be almost $1,000. If I didn’t pay that bill somehow, they were never going to let me have a telephone again. I was able to call some of the customer service departments and get some of the bills canceled or reduced. My houseguest coughed up $500 and gave me a CD player, a PlayStation, and a TV.” —u/MakesCakesEatsMud

“I left a guy that I’d gone on two dates with alone in my apartment for a few hours, and he rearranged my kitchen. That bitch.” —u/makin_the_frogs_gay

“He started a kitchen fire by cooking spaghetti in cake pans without water. When I heard the fire alarm ring, I ran to the kitchen to find him looking over the stove trying to blow out the fire, with his mouth. Like, ‘Phuuu, phuuu.’ Basically stoking the flames. I slid the flaming cake pan into the sink and doused it in water to put it out. When I yelled at him and asked what he was doing, his only defense was, ‘It would have worked!'”—u/tdefreest

“Three days ago, my wife was tasked with feeding her friend’s cat while they’re away for a week. They said, ‘Help yourself to whatever you like.’ She came home with their waffle maker.”—u/Mashy6012

“We had a dinner guest ask to stay overnight because of the snow (which wasn’t forecasted until much later that night). My spouse and I agreed as we didn’t have work the next day. The guest did and at 7:30 in the morning, he was freaking out because we hadn’t shoveled the driveway for him yet. ‘How am I supposed to get to work on time?!'”—u/user256049

“I had guests turn the pool heater on in February and not turn it off or tell me that it was on. I noticed steam coming off of the pool a week later and it was 90 degrees Fahrenheit. The bill was just under $1,000.” —u/Fickle-Willingness80

“He literally took his freaking socks off and put them on the dining table. Dude, what?”—u/soleildelalune_

“When I was renting an apartment, my roommate had a girlfriend stay over every day for two months. She would take a two-hour bath and would always not flush as she was ‘saving’ water. She would also cook and then not clean up after, and her food was always terrible. Another roommate’s nice girlfriend visited for a few hours, gave us food, and was a good guest. The leech complained how she’d better not stay any longer because ‘we’ don’t like freeloaders. Her hypocrisy was amazing. She also refused to wear feminine hygiene products, so my roommate’s bed was bloody and gross. He had to get a new mattress. When they finally broke up, she asked us to let her live there because her parents had kicked her out for trying to sell their house.” —u/illogicalfuturity

“She literally tried to move in. I had an old friend who was in town and I offered to let her stay here for a week instead of getting a hotel. A week turned into two, which became a month. When I confronted her and asked when her new place would be ready, she said that she thought she could just stay. Since she had all of her stuff and was here for over two weeks, even the cops wouldn’t take her away. I had to formally evict her.” —u/hello_ground_

“I let a friend and her dog stay at my house over the weekend while I was away. She left my kitchen a disaster and the back door unlocked. Best of all, she left behind FLEAS. I had asked her directly if her dog was on flea prevention and she assured me it was. After I was swarmed with fleas in my living room, I questioned her again and she admitted that the ‘flea prevention’ she was giving the dog was yeast and garlic tablets. She made no offer to help me treat the house or reimburse me. She was not invited back and we are no longer friends. Shocker.” —u/Pette_Davis

“My mother’s friend and her children went on a vacation with us. We were sitting in the common area of the place we were staying at and started chatting to some strangers there. The friend’s kid got up, walked to the coffee table, and just opened the stranger’s bag of chips and started eating. The kid never asked first. Now, kids are stupid. He was 14, but still a kid. The issue was that his mother did absolutely nothing. She watched him get up, watched him open it, and watched him start eating. One of the strangers just paused for a second and said, ‘Uh, sure… Feel free to eat some.” —u/Spencer2091

“A friend of my significant other showed up after 11 p.m on a weeknight with some other random friend. This was a regular occurrence, as they had been coming home after 11 p.m. every night of their stay, knowing we had to work in the morning. They weren’t quiet either; they were home and ready to party, trying to get us to drink. They spilled things and didn’t wipe up, left glassware everywhere, used the fancy dishes, and never picked up after themselves. They never asked me anything about myself, insulted my restaurant recommendations, cheered against my team for no reason when I had the game on, and made a comment about how there must be a lot of ‘gay stuff’ going on in my brother’s rehab stay.” —u/The_RoyalPee

“My dad’s best friend and his family stayed with us for two weeks during the summer. I was 9 and my sister was a newborn. (She was literally 2 weeks old when they arrived.) Already off to a bad start, the wife kept putting my sister onto her stomach while she slept, when no one was looking. When my mom finally caught the wife doing so and told her to stop because of the risk of cot death, she replied, ‘I did it with all of my kids and they turned out fine,’ and continued doing so. My dad’s friend would tell us what activity we were allowed to do. He’d say things like, ‘You must play in the backyard right now,’ ‘Don’t come inside unless you need the toilet,’ and ‘You must watch TV right now. I don’t care if you’re not interested in the movie. Just shut up and watch.'”

“His wife would only cook sausages and mashed potatoes for dinner, and get angry at my mom when she cooked something different. She also heavily restricted anyone in the kitchen. I had to ask permission to get a cup of water or eat a biscuit from the pantry.” —u/whichrhiannonami

“They were house-sitting for two or three weeks, but when we got home, they’d rearranged almost all of the furniture. Most of it was just moving things back but they had pushed an old teacher’s desk we had down into the basement. It was one of those huge metal monstrosities that weigh a ton, and there was literally no way to get it back up those stairs without some kind of machine that I couldn’t afford. So that thing stayed in the basement and was sold with the home. They also damaged a recliner so that it didn’t recline anymore and claimed they didn’t.” —u/Billbapoker

“I make all of my sandwiches for the week on Sunday night and put them in the refrigerator. An acquaintance was over with a group of friends and he went into the kitchen for a minute. He came back with one of my premade sandwiches. It’s not necessarily about the food per se. He could have easily made his own sandwich if he wanted to. But what would possess someone to take a premade sandwich from their host’s refrigerator without asking? This became my own personal Seinfeld episode.”—u/Icy-Project861