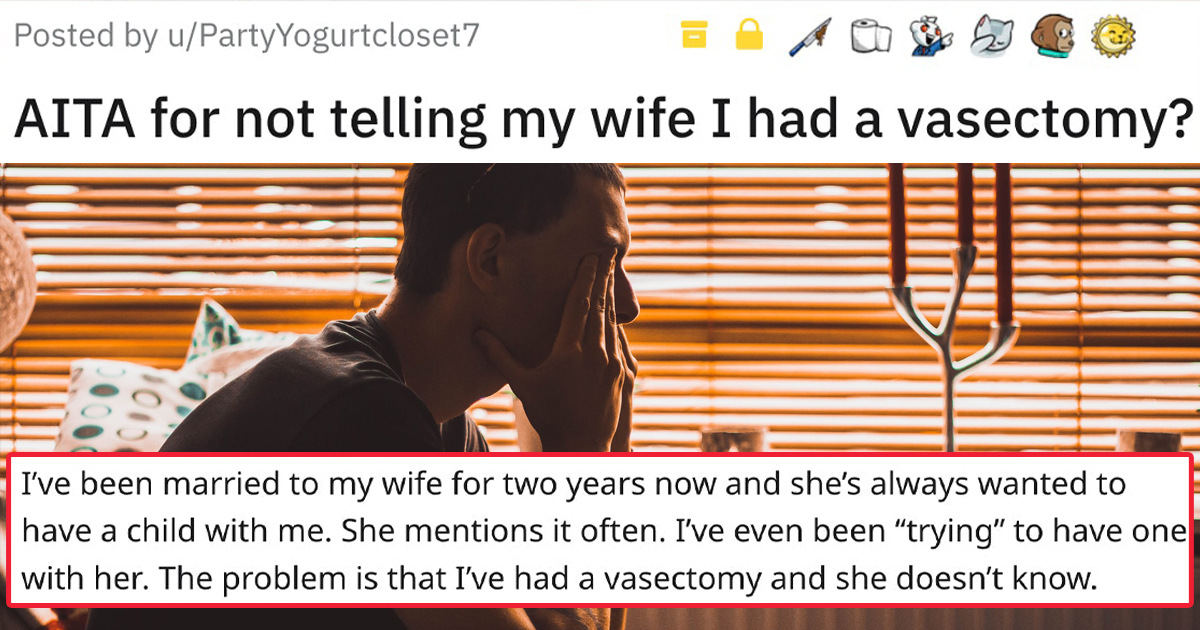 A selfish husband is getting called out online after admitting he never told his wife he had a vasectomy.

A Redditor going by the name of PartyYogurtcloset7 told readers that he had been married to his current wife for two years when he started wondering if he should disclose his inability to have more children to the supposed love of his life.

It all started when his ex-wife came over and dropped off their three shared children for visitation. She and his current wife started chatting, with the latter talking about how they had been “trying” to have a child of their own for some time now.

“Now my ex knows that I’ve been fixed as I did so after our youngest was born,” he admitted. “She looked at me and I knew what she was thinking with the look she gave me. Later she texted me and told me I needed to tell my wife the truth and that she had baby fever and it was cruel to give her false hopes.”

The Redditor elaborated further in the comments, admitting that he always knew she wanted to have a baby but was hoping she would change her mind after a couple years of marriage and getting to spend time with his other children.

“I figured if we tried for a year that she would just think it wasn’t going to happen and we could continue to live our lives as normal. We are perfect together no need to add a child into the mix when I already have several,” he wrote.

He went on to complain that his ex-wife is going to “ruin my marriage and my life” by telling his current wife the truth if he doesn’t do it himself, but Redditors were all too ready to correct his selfish perspective on this whole situation.

Kids aren’t for everyone, and some divorced parents don’t want to add more into the mix. But that’s why these things are discussed — and agreed upon — before any good marriage. The fact that the original poster thinks his wife might leave him over such a bold lie just goes to show relationships built on deception innately can’t be strong relationships in the first place.