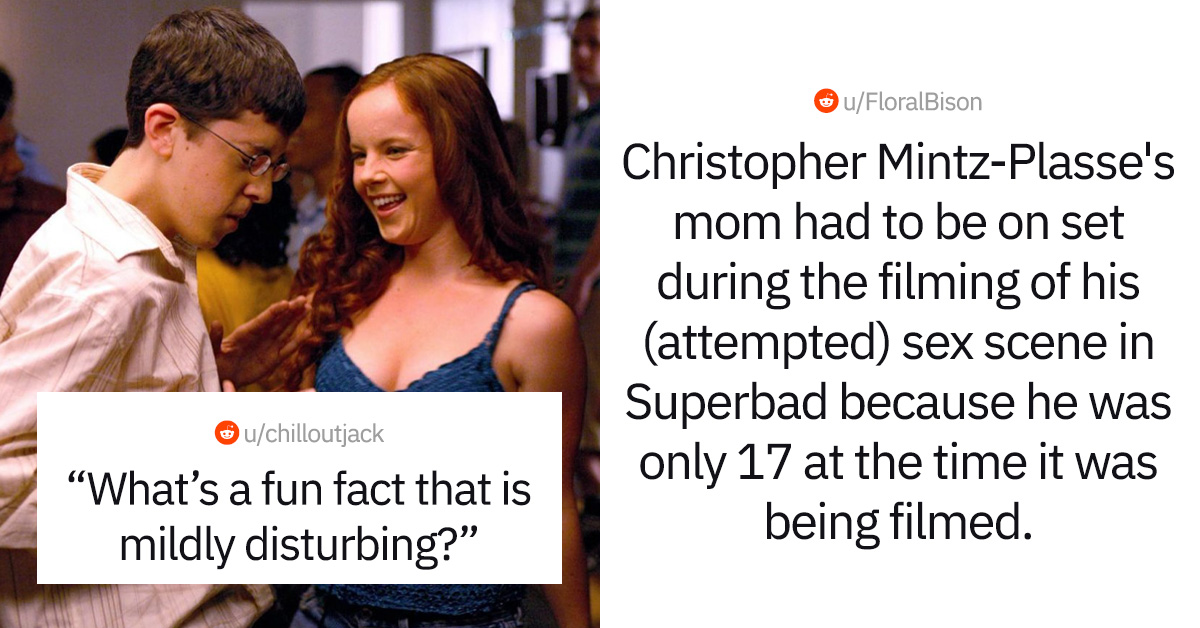 I love a fun fact. They’re great to drop at random when you’re hanging out with friends or a good conversation topic on a date. Maybe not a first date, though. Get to know them before you start throwing unsolicited fun facts.

Someone asked the internet to share mildly disturbing fun facts, and people didn’t hold back. Here are some of the best responses.

What’s a fun fact that is mildly disturbing?

1. “Christopher Mintz-Plasse’s mom had to be on set during the filming of his (attempted) sex scene in Superbad because he was only 17 at the time it was being filmed.”

In medieval times, diabetes was known as the honey sickness, and to test for it a physician would have to taste your urine.

A lion’s tongue is so rough it can lick your skin off. I learned this valuable piece of information from a toy in an Arby’s kids’ meal when I was younger.

5. “There’s a condition in which people become blind, but deny their blindness. The brain creates false perceptions to fill in for the lack of sight. It’s called the Anton Syndrome”

When you’re cremated, your teeth explode from the heat.

If Neil Armstrong and Buzz Aldrin got stuck on the moon the official policy was to cut communication and let them suffocate in silence, Nixon even had a speech prepared in case this happened.

10. “It isn’t your sweat that smells, it comes from bacteria living on your body essentially sh*tting stuff out after they feast on your secretions”

“The sea cucumber will disembowel itself when it feels threatened. It will projectile vomit its digestive system to scare off a predator.”

“Woodpecker’s tongue wraps all the way around his skull”

“It’s cheaper to print with human blood instead of printer ink.”

15. “Meerkats are adorable creatures. They even started in a show called Meerkat Manor. But they are, by far, the most murderous species of any animal, killing more of their own species with greater frequency than any other animal”

“Butterflies engage in a behavior called “mud puddling” where they seek out puddles of moisture to drink for nutrients. If a puddle of blood is the closest thing, they will “puddle” in it and proceed to drink the blood for its nutrients.”

“If you have a boob job, the database for implants is so well-kept and readily available across the country that they can identify your body based on the serial number of your implants.”

20. “Bunnies actually have the ability to scream, but they will only scream if they feel they are about to die.”

“You can f*ck up your future at any time.”

They love it so much they’ve feasted on certain breeds to local extinction.

Always found this mildly (moderately) disturbing because of the similarities in the species, like if wolves sought after puppies.”

“Brain Aneurysms have little to no warning (Headache) and are only diagnosable by CT Scan. Roughly 1 in 50 people in the US have an unruptured Brain aneurysm right now that could rupture at any time. A quarter of BA cases were misdiagnosed and 75% of those we’re no CT scans ordered by the doctor.

Enjoy your next Headache”

30. “Male giraffes will headbutt a female in the bladder until she urinates, then it tastes the pee to help it determine whether the female is ovulating.”