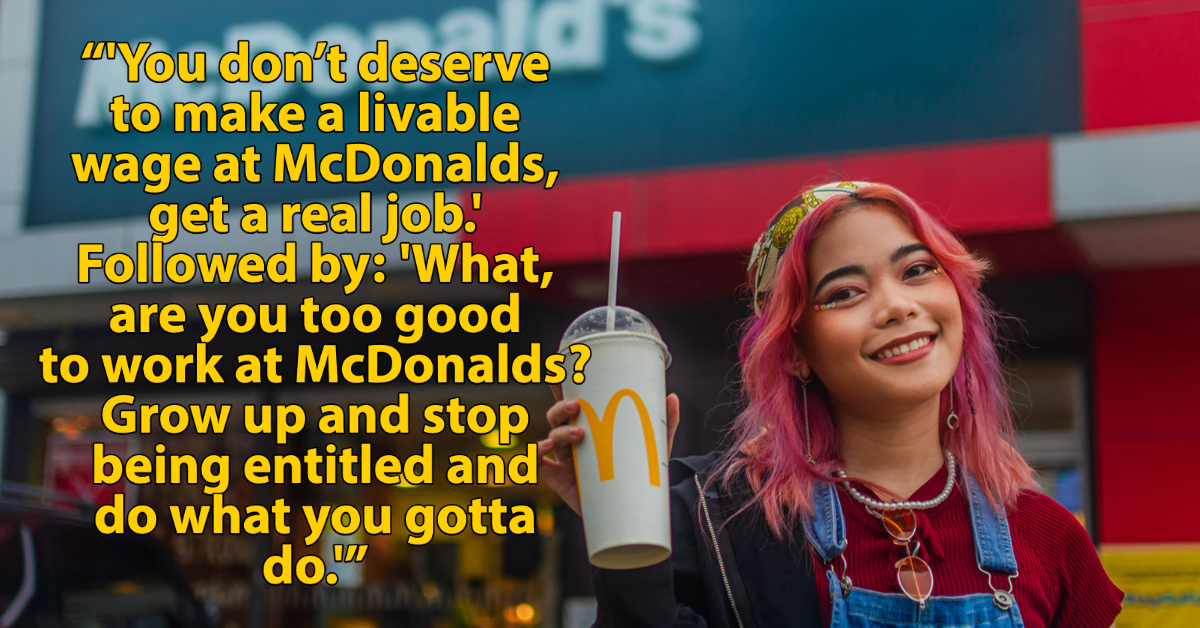 The battles between Millennials and Boomers are infamous. And while no one embodies all the stereotypes of a generation, some of the complaints tend to focus around the same things: money, jobs, and family.

On Reddit, Millennials are talking about the worst pieces of advice they’ve received from Boomers.

And yes, a lot of that bad advice has to do with financial issues and employment. Looking for a job? Just waltz right in and demand to start in the mailroom! You’ll be the CEO in five years!

“I was getting my masters degree and we had a guest lecturer come in. He had been CEO of a small company for many years. He basically told us that he stumbled into the job right out of college because he didn’t know what to do and gave it a shot. They gave him the assistant CEO position because he had been the assistant manager at a movie theater for a summer. And then 2 years later he became the CEO. He was basically telling this entire glass of people getting their advance degrees in the hopes to get his position that he got his job on a whim 30 years ago.” — dreamqueen9103

“Talking to my dad recently, he was going on about ‘participation trophies.’ When I pointed out that we wouldn’t have received said participation trophies had his generation not invented them, his response was: ‘Yep, that’s another problem with your generation. Always blaming your faults on other people.'” — [deleted]

“When I was in high school looking for a job my grandmother told me to just go to places and fill out applications; she told me it was useless using the Internet to look for a job. This was in 2008 and every place I checked for a job had an Internet-based application.” — PM_ME_YOUR_HERO

“‘Babies just need love, not money.’ Sorry, mom, no grandkids until I have a job with a decent paycheck and less student debt.” — NotReallyMaeWest

“I guess I’m on the old side of the millennials, but I had numerous people tell me not to go into computer science and instead go into some other engineering field because computer scientists didn’t make good money, wasn’t a good job, not a good fit, etc. Glad I didn’t listen to any of them as I make a really good salary now. Why the heck would I take advice on entering a high tech field from people who can barely use a computer?” — DrMonkeyLove

“I was once told by a baby boomer, ‘If you want a man to stay with you, you’ll have to pop out a baby’ (or words of that effect). I told her straight up, ‘Any man who would stay for our baby, but not for just me, isn’t a man who I’d want staying in the first place.’ For f*cksakes, is it really that unusual for me to want to be loved for who I am, and not for my ability to procreate? Why would I want to stay with anyone who sees me as nothing but a human incubator?” — Lil-Night

“The lab tech at one of the schools I teach at is a retired old fella. Comes in maybe 2 hours a day, real early in the morning to set up labs for the day. Basically has the ‘job’ for his own entertainment. One morning he caught me in the hall and somehow got into telling me how I really ought to find a job with a good pension. Apparently he worked for some commercial chemistry research lab and retired early once he qualified for their pension program. Then, him and some buddies took some of their early retirement money and bought a big parcel of land. They arranged to have it incorporated into a town, that they ran, then sold off pieces of it for housing developments. So, he’s going through this little history lesson in how the economy used to work and I just stand there and nod. In the back of my head, it dawns on me. He thinks I’m an adjunct by choice. He thinks I teach part-time at three different schools with no advancement potential and minimal benefits because I like it. Hey Boomers, the reason why us god dammed Millenials aren’t doing things the way you used to is that those things don’t exist anymore. There’s no career track jobs in science with just a MS. There’s no more salary for life company pensions. I can’t just go ‘buy me some land’ and flip it for a profit.” — paleo2002

“My boss recently told me my generation was entitled, and began quoting various articles on how we all think we’re special and exempt from criticism etc. AS I was shoveling a dead rat out of the doorway.” — Fatherchristmassdad

“My mother told me to, ‘Just get a job. Tons of places are hiring.’ Though, she has come to understand the struggle now as she spends all day applying to jobs and not getting a single call back.” — bluepandadog

“‘You know, your generation doesn’t understand that you have to buy a house as young as possible to pay it off quickly.’ No old man, we get it. We’re broke as f*ck making 1/3 of what you do in the same work place.” — [deleted]

“‘You don’t deserve to make a livable wage at McDonalds, get a real job.’ Followed by: ‘What, are you too good to work at McDonalds? Grow up and stop being entitled and do what you gotta do.'” — Cursethewind

“Not really advice but my neighbor was complaining about how useless and lazy millennials are after I snowblowed their driveway today. Only, it used to be their snowblower. They misused it, broke it, and I fixed it, and I’ve been doing their driveway ever since. But whatever I’m just some lazy 20-something full time student with a job and enough time to turn wrenches in the garage.” — BlindBeard

“Just go to college even if you don’t know what you want to do.” — [deleted]

“‘If you turn your favorite hobby into a job, you’ll never work a day in your life.’ I’m sure it works for some people, but I have heard so many people say that doing this has just turned their hobby into work they dread doing. When you’re forced to do something to pay for your living, it can end up becoming a chore. It’s okay to have a little separation between passion projects and careers, IMO.” — big_papa_hemingway

17. Always On Their Phones

“Not exactly advice, but this feels like the perfect place: I take out my phone to send a quick text at a family junction, and my elderly relative looks up from her 3 hour Candy Crush session to loudly complain about how millennials are always on their phones and don’t know how to live without technology – but what she’s doing is important, or just checking real quick. Basically, to them, anything we do in our phones is just playing with it, anything they do is important business.” — AvatarWaang

“A pat on the hand or back and then the obligatory comment ‘you’ll understand when you’re older,’ and that condescending glisten in their eye of judgement and apathy.” — Beauregard_q_kazoo

“‘Doing college online is worthless.’ Got my degree, doubled my income within five months at the job I had been gaining experience at while doing my online degree. Many jobs just have that piece of paper as a barrier.” — crackerjeffbox

“‘You’re having trouble making your rent? Just call up the owner and ask if they can reduce it for a little while or put you on a payment plan.’ Mom no. Maybe that works for some people somewhere, but my owner is a huge company out of state. They don’t cut me a break out of the kindness of their heart. If I’m late they charge a fee, and if I’m still late a month later they sue me.” — sonofaresiii

“‘Go outside, get some fresh air! Your mental illness is just in your head! Laugh and smile more, you’ll be fine.’ From a family member. 4 years of therapy in and I still struggle daily.” — squidspeakerr

“I recently got engaged and my mom has started bull-dozer wedding planning. We want to spend a max of $10k since we both have students loans and are saving for a house. She is planning a $40k wedding that she expects us to pay for because ‘it’s what you do.’ All the weddings she has been to for people my age have been my cousins whose rich dad paid out $75k+ so her perception is a bit skewed but still.” — llama_laughter

“My buddy’s mom literally didn’t know inflation existed. She told me minimum wage was $2 was she started working and she survived fine and doesn’t see why it needs to be $7.25. Not necessarily advice but f*ck she’s stupid.” — [deleted]

“I don’t see why you can’t handle the student loan repayment and a house payment?” — NameLessTaken

“My girlfriend was instructed by her Grandmother to ‘always make a boy pay you before having sex with him.'” — partysuave