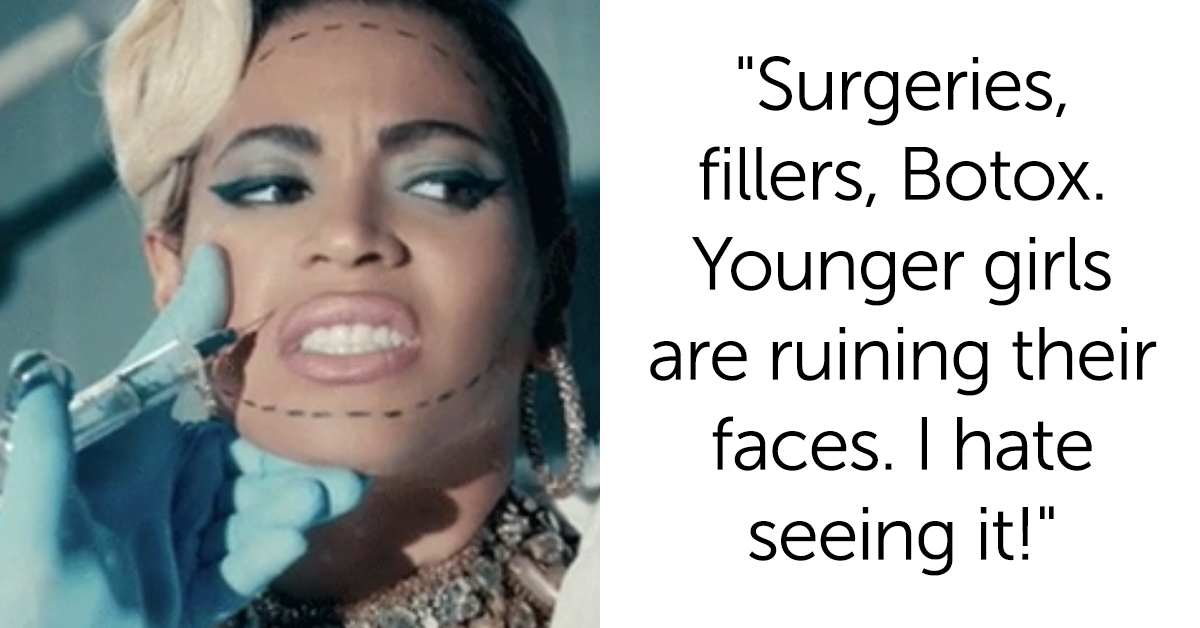 Get ready for some serious “get off my lawn” energy here.

Generational differences have existed since time immemorial and the internet has given us place to out all our thoughts and feelings on the old and the young.

u/FlavourThoughts recently wondered on Reddit, “Older women of reddit, what’s something you notice younger girls do that worries you?” and the virtual village responded in kind. Here are some of the best answers.

Surgeries, fillers, Botox. Younger girls are ruining their faces. I hate seeing it!

Not questioning the normalisation of pornified violent sex. And no, I’m not saying it’s their fault, at all. It’s just fucking depressing reading article after article where young women and even teenage girls are talking about how they’re pressured into tolerating getting choked and hit because they don’t wanna be seen as boring. It’s equally depressing seeing other young women joining the choir to mock the ones considered “vanilla”, only solidifying the norms and further increasing the pressure. I hate it.

Also the normalization of oral sex. Even worse, the imbalance of that normalization. Girlfriends have told me I’m lucky a guy will go down on me. Meanwhile, many guys I’ve been around seem to talk about it as if they know they’ll get it from a fling even if they don’t get sex. It took me an uncomfortably long time to realize that it was okay to not be interested in trying to perform it.

I’m not that old, but I’m old enough to worry like hell about the fact that girls are wearing full faces of makeup at eight. And on a daily basis too. I worry that dating and sex seems to start younger and younger too. I worry that they’re so exposed to TikTok and videos that glorify eating disorders. That they’re watching it and that they’re watching other young girl sexualize themselves for likes and views. Like…please just be kids. Pre-teens. Be awkward and dorky and stop rushing toward adulthood.

They do not think they are enough. They don’t realise how strong they are, or how brave they are, Or how smart they are.

Taking and sending nudes to boyfriends.

Putting their whole life online and using it to seek validation from others.

Women go on tiktok making videos glorifying sex work. On instagram there are “sugar babies” posting about their lavish lifestyles all the time and young impressionable girls eat this up. It’s very sad, and all lies.

Having fwb’s, situationships, together but ‘not together’ all in the hopes that guy picks her. Pretending to be ‘the cool girl’ going along with this thinking he’ll change. They end up so hurt and heartbroken.

I don’t think enough young women value themselves all that much, beyond their physical beauty. And I don’t think they are really aware of that. It’s so beaten into our heads for our entire life. I didn’t learn until my late twenties to view my “self” as valuable because I am smart, creative, kind, helpful. It worried me very much whether or not I was sexually appealing. I will say I do value physical beauty and it has benefits but it is not at all everything. I wish I would have learned this earlier.

Obsessing about and fearing their age and aging. No girl, 21 is not old. No dear, thirty is flirty. No pretty lady, forty is fabulous.

This was mentioned in another part of the thread, but it’s relevant here too: it genuinely baffles me that when someone points out (for example) that a video of a 12 year old twerking is concerning and inappropriate, the backlash is often, “wHy ArE yOu SeXuALiZiNg A cHiLd, PeRvErT.” Like I’m NOT, but the behavior and clothing ARE inherently sexual. Which is why it’s fucked up that a literal child is doing it and why I have concern. The backlash stops the conversation short and I don’t know how to come back from that.

Vaping. I was at a bus stop the other day seeing young girls around 14 and 15 vaping in their school uniform. Full face of make up, uniform skirt hitched up, handbag for a school bag and puffing away on a colourful bar vapes like it was a cigarette. So sad to see.

Elementary aged girls getting their brows/eyelashes/other enhancements done. Blows my mind. Just be a kid!!

Getting with older men, who are using them rather than being equal partners.

I always worry about the obsession with dieting and bodies. I have so much trauma around diet culture. Growing up in the 90’s and 2000’s was a nightmare seeing what was deemed the right and wrong body, women being called fat on TV and in magazines, and crash diets coming out constantly. My mom was and still is heavy into diet culture and growing up with her commenting on my food and body all the time fucked me up. At 32, I can filter things out and see what’s ridiculous, but as a teenager it’s a lot harder. I worry for those girls and wish they didn’t have to see all the negativity like myself and a lot of women did during formative years.

Casual sex for social validation, or even sex with exclusive partner when they don’t feel like it for the sake of validation as well. In general having sex not because they want it but to fill the void and seek validation from men. Girls don’t do it.

open relationships. There’s a big trend with this I feel like…someone literally told me the other day that “monogamy isn’t normal” and I was so taken aback by that. Since when? I feel like cheating has become such a normal thing that women feel the need to do things like threesomes and open relationships to keep their man happy and it’s just sad.

Put your phones down when you’re walking. Please visually pay attention to your surroundings. It’s dangerous in more ways than one and being present is important.