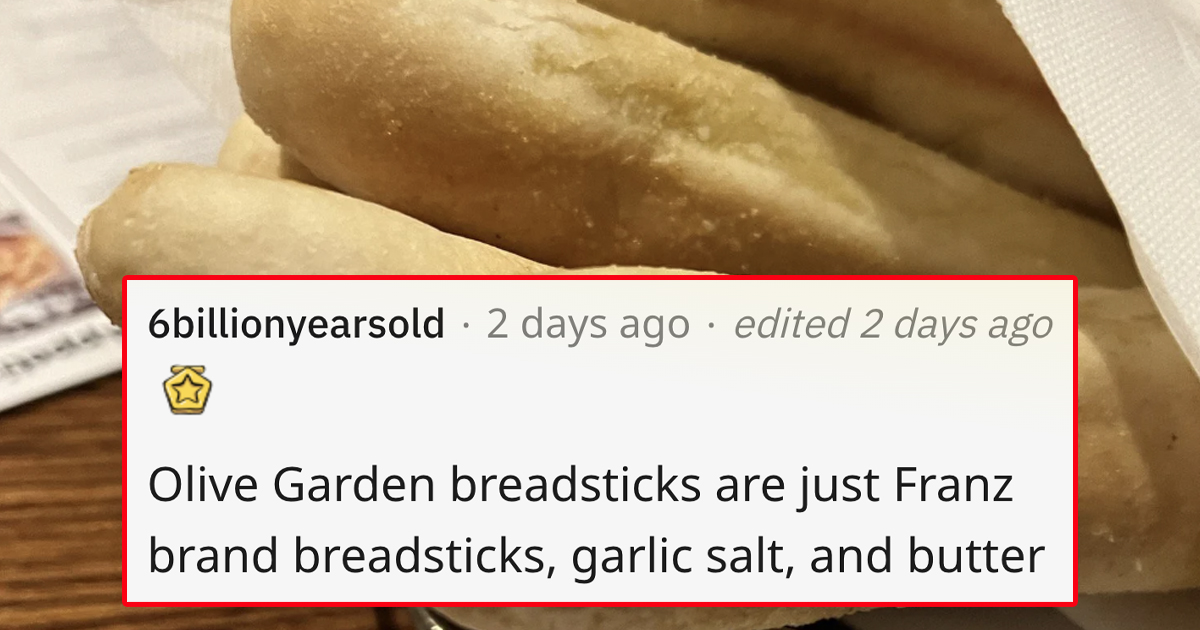 When you work at a company, you’re oftentimes asked to sign non-disclosure agreements or other documents that mean you aren’t allowed to spill some of the little secrets that the public is always dying to know. But once you’re long outside that company’s reach… well… all bets are off!

Today we have an awesome Reddit thread FULL of those secrets, courtesy of u/broadway96. This person asked, “Whats a company secret you can share now that you don’t work there?”

The owner was, at first glance, a short-tempered, critical penny-pincher who did everything he could to save business money, right down to watching over your shoulder to make sure you didn’t put too much cheese on a pizza (cheese is called “white gold” in the pizza industry, even back in 2002), but after working for him for a while, you realized why he was so specific about the margins. Twice yearly, he would send out generous bonuses (in the form of money orders made out to his employees from his own personal savings account) to the college students working for him. the checks/money orders contained the memo line “keep learning!” The amount of the money orders would be directly correlated to the profit margins of the stores he owned. the dude did legit profit sharing. After I graduated, i heard a rumor that he was trying to start up a small education grant trust that would benefit applicants of the Farmer School of Business at Miami University, but I don’t think anything ever came of it.

This owner also played favorites when hiring. Every single one of his managers was a former employee. Three of the four managers at his stores when I worked there had graduated from my college with business degrees. All four of them had a small portion of their education paid for by Marvin Covington.

Marvin Covington, Oxford, Ohio Dominoes owner from Vevay, Indiana, died in 2017. That dude knew how to do business, and do it right.

I worked at L’Oréal. The cosmetics from L’Oréal and Lancôme are practically the same. But Lancôme costs like $20 more.

I worked for a MAJOR hotel chain in housekeeping for over 10 years. The number of suicides and people who die naturally in their rooms is a lot higher than you’d think. I worked at a huge convention hotel with over 1000 rooms and it happened quite often. Unless it was a pretty gnarly mess it would just get cleaned like normal and the next guest had no idea.

I worked at a comic book store that offered a service where you paid a small premium to have sent in rare comics to have them graded at CGC. A few months later we had many customers coming in to check the status of their comics. We contacted the owner to see what was going on, and he would always claim that there was some distribution problem. Fast forward a few months, we found out he was taking customers graded copies and selling them online while trying to return back issue versions of their original comics.

Health insurance dude. When you file a claim, it is often denied because they’re counting on you not escalating it. Once you do, your case goes to a “medical management group” which ought to be called the “we don’t wanna pay” group.

Keep escalating and involve your doctor. Fight for the insurance you paid for.

The vehicle modification shop at Chillicothe Correctional Institution in Chillicothe, Ohio dumps waste coolant from the machine shop into a storm drain that empties directly into the Scioto River, because the chemical disposal tank is a 55 gallon drum in the paint shop, and that’s much too small.

They can’t throw me into solitary confinement for complaining anymore.

I don’t think it’s a bad secret at all. But back in college, I delivered pizzas for Papa John’s. The store manager must have had an undiagnosed case of OCD or germaphobia or something.

He was amazingly picky about the cleanliness and food quality. “Expiration date is three days from now? Fuck that, I’ll order more. Throw that shit away, we’re not serving it.”

He would also go out of pocket to buy special cleaning products “because that worthless bullshit that corporate wants us to use doesn’t get the job done”. He also went out of pocket to hire some kind of specialist to clean out the fountain drink dispenser, ice machine and all that stuff. “The machine needs to always be as close to brand new as possible!”

One stand out moment for me was when he reduced a cashier to tears by hollering “Would you eat off this floor? No? THEN IT’S NOT CLEAN ENOUGH!” He wasn’t telling her to eat off the floor. He was just making a point.

After we’d closed the store, he’d kick all of us out, lock up behind us and stay until something like 2am cleaning the place. You always knew when he closed because you could smell the chemical scent still lingering in the air.

The end result of this was the store, the food, the equipment and the facilities were always in squeaky clean condition. Customers (somehow) picked up on what a perfectionist the store manager was and bought from us all the time. Because there’s a lot of peace of mind that goes in with knowing your food was cooked by someone willing to throw ingredients away BEFORE the expiration date, stay in the store until God knows when cleaning everything, etc.

The true irony was how much the boss hated himself because he didn’t think he was doing a good enough job to run a clean restaurant with fresh ingredients. It didn’t matter how many compliments he got from customers or how many service industry veterans said they’d never worked in a place as obsessive about freshness and cleanliness as his Papa John’s store, he was convinced his store was still a filthy barn.

Eventually, he got promoted to some kind of higher level corporate position (district manager?) that required him to visit other stores and make sure they were all up to spec. The end result of that was a LOT of stores in this area all improved seemingly overnight.

If you pick up a wall phone at Home Depot and push ‘7’ it activates the store wide intercom. This works in every store in my province afaik

If you were on Live Chat with Customer Care, I could see what you were typing before pressing send.

I watched people work through grotesque, racist, sexist statements, fraudulent lies and mistruths, meticulous grammar fixes, and their whole range of emotions in real time before deleting and typing “ok.”

Ford parts from Mexico are way more reliable than Ford parts from Detroit, or at least they were before 2020. I worked in Detroit and we had some customers who were fussy about us always doing repairs with Michigan parts, but when we had a problem that wouldn’t stay fixed we would always secretly switch to the Mexican parts (which did solve things).

I used to work in college admissions. Rich donors, athletes, and other VIPs have lower admission criteria. They still have minimums, but they’re super easy to reach, even for a “selective” university.

In the case of the university I worked for (BYU), children of General Church Authorities also got this.

A place similar in name to Past Face Urgent Care (at least in the region I worked at) banned their front desk from informing customers that they have a credit balance to use toward their services and still required us to charge customers the full price on top of what we already owed them. Some accounts had like 500 dollars of copay that should have been refunded but weren’t. I was actually reprimanded for applying the credit balance, because despite finance agreeing my method was correct, the regional manager said it was not a good look for the company and hindered her profits.

In a broadband company I worked for I was tasked with editing thousands of complaints to avoid huge Ofcom fines.

Diet Sprite and Sprite Zero were the exact same thing. They didn’t change the recipe one bit. They just changed the name and design.

I still work here but EVERYONE PLEASE get a copy of your Medical Records from every place you’ve been to.

keep a hard copy, in your home

I worked at a Petco in Alaska. Apparently brown/black mice are not allowed up here. Only white mice. We got a shipment in of a bunch of black/brown mice and had to take them to the “vet” to be killed. Also, the animals are literally shipped in on a UPS truck and delivered in packages. I would open a package and it would be full of fish or mice or snakes. Ya never knew what was coming, it was wild. Luckily my shift manager was a really good person. She tried her best to help any sick animal and was super diligent about keeping the cages really clean. She would stay after hours to care for the sick animal in the back and double down on cleaning.

When upper management came, they didn’t give a shit how clean anything was. They would yell at us to get more customers to sign up for “pet rewards”. If I didn’t pester every single person checking out, they would get angry and give me point deductions. I have no idea what the deductions even did. One of the upper managers watched me for like 3 hours when I was at the register. He said I wasn’t pushy enough on getting people to donate/sign up for shit. Bitch, I will ask once and if they say no I am not asking again. That shit is annoying AF. He also got mad at me when I didn’t clean the bird cage fast enough. It took “time away from the register.” Uh I’m sorry I don’t want our birds to stand in there own shit for hours, so yeah imma take my time to scrub that shit clean.

Also, don’t buy fish from petco. Pretty much every shipment that came in they were all infected with ICK. Basically half our tanks were in quarantine. We had several customers come back saying we killed there entire fish tank because of a fish we sold them. Fuck Petco.

Worked at Best Buy 20 years ago. Employee discount was 5% over cost and I needed a new printer. Decided to splurge on the gold plated USB printer cable that we sold for $40. Rang up $1.78.

I was the one who did an undercover news stories about Scamps Pet Stores and their affiliation with puppy mills.

I used to work surveillance at a casino. From something like 3 stories high ceiling, we could zoom in on money on the table games and read the serial numbers of the bills. We could see the pips on the dice. Policy was to not look down blouses.